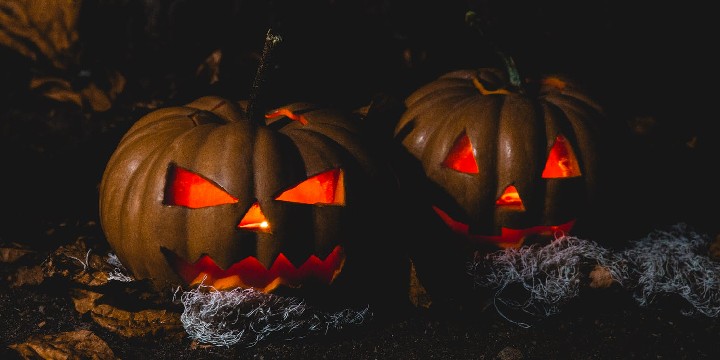 Make the most out of the spookiest holiday of the year by reading these Halloween quotes!

Halloween is not just for trick-or-treating, costume parties, and pranks. In essence, it is a day celebrated to remember the dead and the religious beliefs that come with it.

Aside from this, it is also a fascinating way of learning about the rich culture of fear.

This is because Halloween gives us insight into why we are scared of certain beliefs and superstitions.

So, if you want to make your Halloween more enjoyable and memorable, add this to your must-read list!

Check out the complete list below and be ready to get spooked!

And don’t forget to read these Thanksgiving quotes.

2. “Anyone could see that the wind was a special wind this night, and the darkness took on a special feel because it was All Hallows’ Eve.” – Ray Bradbury

4. “Halloween wraps fear in innocence, as though it were a slightly sour sweet. Let terror, then, be turned into a treat.” – Nicholas Gordon

5. “The farther we’ve gotten from the magic and mystery of our past, the more we’ve come to need Halloween.” – Paula Guran

6. “October was always the least dependable of months, full of ghosts and shadows.” – Joy Fielding

7. “Halloween is not only about putting on a costume, but it’s about finding the imagination and costume within ourselves.” – Elvis Duran

8. “The Halloween wind was blowing, not a blasting of wind but a right-sized swelling, falling, and gushing of wind. It was a lovely and exciting night, exactly the kind of night Halloween should be.” – Eleanor Estes

9. “Halloween is a celebration of the inversion of reality and a necessary Gothic hat tip to the darker aspects of life, death, and ourselves.” – Stewart Stafford

10. “Halloween shadows played upon the walls of the houses. In the sky, the Halloween moon raced in and out of the clouds.” – Eleanor Estes

11. “Nothing on earth so beautiful as the final haul on Halloween night.” – Steve Almond

13. “October proved a riot, a riot to the senses and climaxed those giddy last weeks before Halloween.” – Keith Donohue

14. “On Halloween, you get to become anything that you want to be.” – Ava Dellaira

15. “When black cats prowl, and pumpkins gleam, may luck be yours on Halloween.” – Anonymous

16. “Halloween was the best holiday, in my opinion, because it was all about friends, monsters, and candy, rather than family and responsibility.” – Margee Kerr

17. “Halloween is a day in which some people choose to wear a mask, while others finally feel safe to take theirs off.” – Steve Maraboli

18. “She’d always loved Halloween. A magic night. A night when anything could happen. Monsters could be real. Magic could whisper in the air.” – Cynthia Eden

Halloween Quotes That Are Perfect for Spooky Nights

20. “Oh how the candles will be lit and the wood of worm burn in a fiery dust. For on All Hallows’ Eve will the spirits come to play, and only the fruit of thy womb will satisfy their endless roaming.” – Solange Nicole

21. “‘Tis the night—the night of the grave’s delight, and the warlocks are at their play. Ye think that without the wild winds shout, but no, it is they—it is they.” – Arthur Cleveland Coxe

23. “Most people will tell you growing up means you stop believing in Halloween things— I’m telling you the reverse. You start to grow up when you understand that the stuff that scares you is part of the air you breathe.” – Peter Straub

25. “We have had our summer evenings, now for October eves!” – Humbert Wolfe

Short Halloween Quotes That Will Make Your October Unforgettable

28. “There is something haunting in the light of the moon.” – Joseph Conrad

29. “There is magic in the night when pumpkins glow by moonlight.” – Anonymous

31. “Have you come to sing pumpkin carols?” – Linus Van Pelt

Halloween Quotes for Everyone Who Loves Tricks and Treats

33. “Trick or treat, a bag of sweets, ghosts are walking down the street.” – Anonymous

34. “There is a child in every one of us who is still a trick-or-treater looking for a brightly-lit front porch.” – Robert Brault

36. “I don’t know that there are real ghosts and goblins, but there are always more trick-or-treaters than neighborhood kids.” – Robert Brault

Poetic Halloween Quotes That Will Scare You

37. “By the pricking of my thumbs, something wicked this way comes.” – William Shakespeare

38. “There are nights when the wolves are silent and only the moon howls.” – George Carlin

40. “When the witches go riding, and black cats are seen, the moon laughs and whispers, ’tis near Halloween.” – Anonymous

41. “I love Halloween, and I love that feeling: the cold air, the spooky dangers lurking around the corner.” – Evan Peters

42. “If human beings had genuine courage, they’d wear their costumes every day of the year, not just on Halloween.” – Douglas Coupland

43. “Halloween is an ancient druidic holiday, one the Celtic peoples have celebrated for millennia. It is the crack between the last golden rays of summer and the dark of winter. The delicately balanced tweak of the year before it is given over entirely to the dark. A time for the souls of the departed to squint, to peek, and perhaps, to travel through the gap.” – Jenny Colgan

44. “Halloween was confusing. All my life, my parents said, ‘Never take candy from strangers.’ And then, they dressed me up and said, ‘Go beg for it.'” – Rita Rudner

45. “The world turned upside down, in a good way, for one black velvet night.” – Karen Fortunati

46. “This is my costume. I’m a homicidal maniac. They look just like everyone else.” – Wednesday Addams

47. “When the spooks have a midnight jamboree, they break it up with fiendish glee. The ghosts are bad, but the one that’s cursed is the headless horseman. He’s the worst. That’s right. He’s a fright on Halloween night! When he goes a joggin’ across the land holding his noggin in his hand, demons take one look and groan, and they hit the road to parts unknown. Beware, take care! He rides alone!” – Tim Burton

48. “A ghost can be a lot of things. A memory, a daydream, a secret. Grief, anger, guilt. But, in my experience, most times, they’re just what we want to see.” – Steven Crain

49. “Each year, the Great Pumpkin rises out of the pumpkin patch that he thinks is the most sincere.” – Charles M. Schulz

50. “Halloween is an opportunity to be really creative.” – Judy Gold

Funny Halloween Quotes to Fill Your Belly With Laughter

51. “Halloween should be a day in which we honor monsters and not be mad at each other.” – Michael Scott

52. “Halloween is the only time people can become what they want to be without getting fired.” – Sylvester Stallone

54. “Some people are born for Halloween, and some are just counting the days until Christmas.” – Stephen Graham Jones

55. “Every Halloween, I bring a spare costume in case I strike out with the hottest girl at the party. That way, I have a second chance to make a first impression.” – Barney Stinson

More Halloween Quotes to Greet Your Friends With

57. “Wishing you a spooky good October and a fang-tastic Halloween!” – Anonymous

58. “Hope you don’t have a scare in the world this Halloween!” – Anonymous

60. “Wishing you a spook-tacular Halloween!” – Anonymous

Did These Quotes Make You Appreciate Halloween More?

Everyone loves Halloween because of all the fun parties, sweet candies, and scary costumes. After all, it is exciting to dress up into someone or something that is both frightening and amazing to us. It gives us the rush of being scared and scaring someone.

But, most of all, it reminds us of the great practice we have in remembering the dead and the departed. Our way of dressing up and having bonfires is part of the belief that we ward off evil spirits on this day. Trick-or-treating is also an Old World custom where people dress up and tell a joke in exchange for candies or fruit.

By celebrating Halloween, we participate in a tradition that has been alive for decades. Indeed, there is a reason this holiday is enjoyed by everyone, both young and old.

Everything about Halloween is rich in culture and fun to celebrate. With that, we hope that these quotes were able to make you appreciate the spookiest holiday of the year. Get your scariest costume ready and scream out, “Trick or treat!”