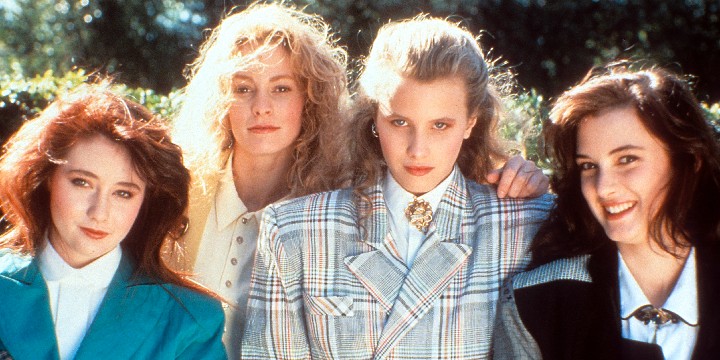 Read these Heathers quotes to realize that popularity is not always worth it.

Heathers is a dark comedy movie released way back in 1989. It zooms in on the well-known but feared clique that abuses its power and influence to bully others.

The clique consists of four members: Heather Chandler, Heather McNamara, Heather Duke, and Veronica Sawyer. Sometimes, Veronica misses her old life with simpler and kinder friends. Yet, she endures the cruel attitude of the Heathers just to fit in and remain famous.

When Veronica meets Jason Dean, the rebellious outsider, her world turns upside down. Because of him, Veronica’s life spirals into a continuous cycle of hate, murder, and indifference. She exacts vengeance on her enemies, who are also her best friends.

Heathers is a movie that’ll make you realize how destructive fame is and how to pick the right friends. Read our list of quotes to learn many lessons about friendship, popularity, love, and betrayal.

And don’t miss out these The Outsiders quotes and Bring It On quotes.

1. “If you were happy every day of your life, you wouldn’t be a human. You’d be a game show host.” – Veronica Sawyer

2. “Whether to kill yourself or not is one of the most important decisions a teenager can make.” – Ms. Pauline Fleming

3. “Dear diary, Heather told me she teaches people ‘real life.’ She said, ‘Real life sucks losers dry. You want to f*ck with the eagles, you have to learn to fly.’ I said, ‘So, you teach people how to spread their wings and fly?’ She said, ‘Yes.’ I said, ‘You’re beautiful.’” – Veronica Sawyer

4. “The extreme always seems to make an impression.” – Jason Dean

5. “Chaos is great! Chaos is what killed the dinosaurs, darling.” – Jason Dean

Jason Dean: “And your worst enemy.”

8. “Did you have a brain tumor for breakfast?” – Heather Chandler

19. “F*ck me gently with a chainsaw. Do I look like Mother Teresa?” – Heather Chandler

Heathers Quotes That’ll Give You Reasons to Avoid Bad Friends

Veronica Sawyer: “Cool guys like you out of my life.”

21. “Well, it’s just like they’re people I work with, and our job is being popular and shit.” – Veronica Sawyer

Jason Dean: “What do you think I’m gonna do with it? Take out her tonsils?”

23. “I prayed for the death of Heather Chandler many times, and I felt bad every time I did it, but I kept doing it anyway. Now I know you understood everything. Praise Jesus, Hallelujah.” – Heather Duke

Heathers Quotes for You to Think About

24. “Let’s pretend I blew up the school—all the schools. Now that you’re dead, what are you gonna do with your life?” – Jason Dean

Veronica Sawyer: “Yeah? I just got back.”

26. “Color me impressed. You, you really f*cked me up pretty bad, Veronica. You got power—power I didn’t think you had. The slate is clean.” – Jason Dean

Meaningful Heathers Quotes to Get Insights on Mental Health

27. Veronica Sawyer: “If everyone jumped off a bridge, would you?”

Jason Dean: “You don’t get it, do you? Society nods its head at any horror the American teenager can think upon itself. Nobody is going to care about exact handwriting.”

29. “People will look at the ashes of Westerburg and say; ‘Now there’s a school that self-destructed, not because society didn’t care, but because the school was society.’ Now that’s deep.” – Jason Dean

Veronica Sawyer: “You’re throwing your life away to become a statistic on US f*cking A today. That’s about the least private thing I can think of.”

Did These Quotes Make You Value Good Morals Rather Than Popularity?

Popularity is great because it can increase your confidence. We all want that. But, don’t take the risk of hanging out with cruel people just to achieve fame because it’ll never be worth it.

Instead, you should desire to have truthful and caring friends because that’s the kind of friendship you can keep forever. We should be mindful of who we associate with to avoid betrayal in the future. After all, we can all agree that influential people don’t always show us their real motives—like some of the characters from Heathers.

As a person who has good morals, you should always choose to stand up for what is right, even with or without the influence of other people. You should not let others bend your rules, integrity, and principles.

So, keep in mind the lessons you’ve gotten from Heathers. Before you enter a friendship, you should know their intentions because friends are supposed to bring out the best in you, not the worst. Always act with kindness despite any tragedy that’ll come your way.