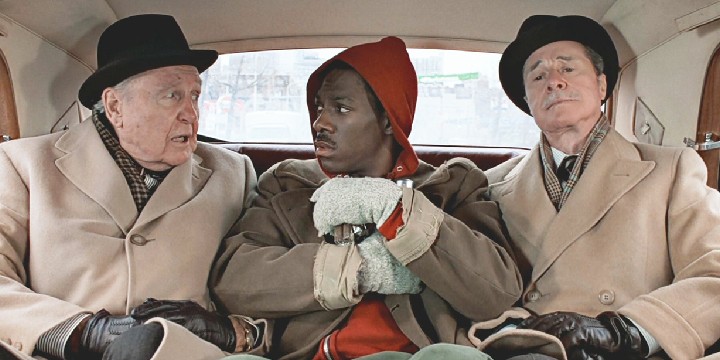 If you’re a fan of Eddie Murphy, then these Trading Places quotes will be right up your alley!

Trading Places is a movie about an executive, Louis Winthorpe III, and a beggar, Billy Ray Valentine, who are the subjects of a bet by two successful brokers. These brokers, Randolph and Mortimer Duke, wanted to test how each person would perform if they exchanged places in life.

To carry this out, they set up Winthorpe for a crime he didn’t commit and appointed Valentine in his place. Later in the movie, the two victims discover the plan and set out to get even with the Dukes.

Trading Places is a hilarious movie filled with clever, funny, and meaningful quotes! We’ve listed our favorites for you to enjoy, so read on!

And don’t miss out these Three Amigos quotes and The Benchwarmers quotes.

2. Billy Ray Valentine: “You know, you can’t just go around and shoot people in the kneecaps with a double-barreled shotgun ’cause you pissed at ’em.”

Louis Winthorpe III: “Why not?”

Billy Ray Valentine: “It’s called assault with a deadly weapon; you get twenty years for that sh*t!”

Louis Winthorpe III: “Listen, do you have any better ideas?”

Billy Ray Valentine: “Yeah. You know, it occurs to me that the best way you hurt rich people is by turning them into poor people.”

Coleman: “You have to admit, sir, you didn’t like it yourself a bit!”

3. Billy Ray Valentine: “What if I can’t do this job, Coleman? What if I’m not what they expected?”
Coleman: “Just be yourself, sir. Whatever happens, they can’t take that away from you.”

Billy Ray Valentine: “The Dukes used us as guinea pigs, man. It was an experiment to see how our lives would turn out. They made a bet.”

Ophelia: “I believe him, Louie.”

Louis Winthorpe III: “The Dukes—ruined my life—over a bet. For how much?”

Louis Winthorpe III: “One dollar. Fine. That’s the way they want it; no problem.”

6. “Listen, taxis cost money, food costs, money and rent costs money! Now, you want me to help you out; I expect a lot in return.” – Ophelia

7. “And then there are other commodities, like frozen orange juice—and gold. Though, of course, gold doesn’t grow on trees like oranges.” – Randolph Duke

Mortimer Duke: “She meant it as a compliment.”

10. “By the way, food and rent aren’t the only things around here that cost money. You sleep on the couch.” – Ophelia

11. “When you think of love, does your heart go round and round?” – Billy Ray Valentine

Ophelia: “Unless somebody stops them—.”

Coleman: “Or beats them to it. Eggnog?”

Billy Ray Valentine: “I do not drink; it is against my religion!”

Coleman: “Religion is a good thing, I say, taken in moderation.”

Louis Winthorpe III: “This place is a dump.”

Mortimer Duke: “Winthorpe, my boy, what have you got for us?”

Louis Winthorpe III: “Well, it’s that time of the month again. Payroll checks for our employees, which require your signatures. And no forgetting to sign the big ones!”

Mortimer Duke: “We seem to be paying some of our employees an awful lot of money.”

Randolph Duke: “It’s perfectly all right, William. It was your vase.”

Billy Ray Valentine: “That was a cheap vase, right? That was a fake? Right?”

Billy Ray Valentine: “You want me to break something else?”

18. Randolph Duke: “That man is a product of a poor environment. There’s nothing wrong with him; I can prove it.”

Mortimer Duke: “Of course, there’s something wrong with him—he’s a Negro!”

20. Even Bigger Black Guy: “It ain’t cool being no jive turkey so close to Thanksgiving.”

More Trading Places Quotes That You Must Read Today

21. “I had the most absurd nightmare. I was poor, and no one liked me. I lost my job, I lost my house, Penelope hated me, and it was all because of this terrible, awful Negro.” – Louis Winthorpe III

23. Randolph Duke: “The good part, William, is that no matter whether our clients make money or lose money, Duke & Duke get the commissions.”

Mortimer Duke: “Well? What do you think, Valentine?”

Billy Ray Valentine: “Sounds to me like you guys a couple of bookies.”

24. Even Bigger Black Guy: “I mean you beatin’ 10 cops? You putting a man in the hospital? How come I don’t see no bruises on you?”
Big Black Guy: “Yeah!”
Billy Ray Valentine: “’Cause I’m a karate man! And a karate man bruises on the inside! They don’t show their weakness. But you don’t know that because you’re a big Barry White-looking motherf*cker! So get outta my face!”

25. Louis Winthorpe III: “Think big, think positive, never show any sign of weakness. Always go for the throat. Buy low, sell high. Fear? That’s the other guy’s problem. Nothing you have ever experienced will prepare you for the absolute carnage you are about to witness. Super Bowl, World Series; they don’t know what pressure is. In this building, it’s either kill or be killed. You make no friends in the pits, and you take no prisoners. One minute you’re up half a million in soybeans, and the next, boom, your kids don’t go to college, and they’ve repossessed your Bentley. Are you with me?”

Have You Ever Wished That You Lived a Different Life?

Everyone desires a life that’s free from problems and stress. Because of the tough times we’re going through, we don’t blame you if you think the same way. But, let’s not forget the blessings we have already been given, despite the dark times.

In the movie, we see two very different standards of living. While it’s normal to crave a more comfortable life, we should also remember that nothing comes easy in this life. Billy Ray Valentine might have become richer overnight, but it was not without others’ evil intentions and greed.

Yearning for a better life is something we can all relate to. But, unlike in the movie, let’s remember that success and prosperity won’t happen in a blink of an eye. We must constantly put in the effort and hard work to achieve our goals.

Though Trading Places is a good comedy movie, there are still many more lessons we can learn from it. We’ve tackled one today, but hopefully, you’ll discover more wherever you revisit this list of quotes.

With that, we hope that this list of quotes was able to foster thankfulness, acceptance, and appreciation in your heart. Remember, life has already blessed you with many things, so be grateful!