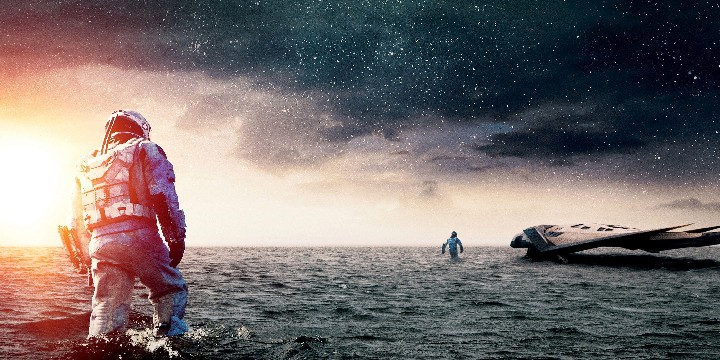 Take advantage of this collection of insightful Interstellar quotes to help you understand the marvels of the universe.

This movie is about scientific theory, technology, and the human psyche. Special missions are given to some brave folks to find a new home for humanity.

It also demonstrates how much a father is willing to give up for the sake of his children.

Christopher Nolan released his blockbuster sci-fi film in 2014. This movie explores the boundaries of time, place, and love.

Buckle up as we bring you these quotes from outer space!

And don’t forget to check out these Pirates of the Caribbean quotes and Star Wars quotes.

1. “Love is the one thing that transcends time and space. Maybe we should trust that, even if we cannot understand it.” – Amelia

2. “Newton’s third law. You gotta leave something behind.” – Cooper

4. “Accident is the first building block of evolution.” – Amelia

5. “Mankind was born on earth. It was never meant to die here.” – Cooper

6. “Don’t trust the right thing done for the wrong reason. The why of the thing, that’s the foundation.” – Donald

8. “You can’t just think about your family now. You have to think bigger than that.” – Doyle

9. “Mankind’s next step will be our greatest.” – Cooper

11. “Murphy’s Law doesn’t mean that something bad will happen. It means that whatever can happen will happen.” – Cooper

12. “Time is relative, okay? It can stretch and it can squeeze, but it can’t run backwards. Just can’t. The only thing that can move across dimensions, like time, is gravity.” – Amelia

13. “Once you’re a parent, you’re the ghost of your children’s future.” – Cooper

14. “We must reach far beyond our own lifespans. We must think not as individuals but as a species. We must confront the reality of interstellar travel.” – Dr. Brand

15. “Do not go gentle into that good night. Old age should burn and rave at close of day. Rage, rage against the dying of the light.” – Dr. Brand

18. “No. No parent should have to watch their own child die. I have my kids here for me now. You go.” – Murphy

19. “Sure, but he had to die in the first place. There’s not a planet in our solar system that can sustain life and the nearest star is over a thousand years away, I mean, that doesn’t even qualify as futile. Where’d you send them?” – Cooper

21. “Everybody ready to say goodbye to our solar system?” – Cooper

22. “I am thinking about my family and millions of other families.” – Cooper

24. “We must confront the reality that nothing in our solar system can help us. We are not meant to save the world. We are meant to leave it, and this is the mission you were trained for.” – Dr. Brand

25. “We’ve always defined ourselves by the ability to overcome the impossible. And we count these moments. These moments when we dare to aim higher, to break barriers, to reach for the stars, to make the unknown known. We count these moments as our proudest achievements. But we lost all that. Or perhaps we’ve just forgotten that we are still pioneers. And we’ve barely begun. And that our greatest accomplishments cannot be behind us, because our destiny lies above us.” – Cooper

26. “A machine doesn’t improvise well because you cannot program a fear of death. Our survival instinct is our greatest source of inspiration.” – Dr. Mann

27. “You might have to decide between seeing your children again and the future of the human race.” – Amelia

28. “You’re telling me it takes two numbers to measure your own ass but only one to measure my son’s future?” – Cooper

30. “This world’s a treasure, but it’s been telling us to leave for a while now.” – Cooper

Motivational Interstellar Quotes That Will Push You to Power Through

33. “It’s what we intended, Dr. Brand. It’s our only chance to save the people on earth. If I can find a way to transmit the quantum data I’ll find there, they might still make it.” – TARS

34. “When I was a kid, it seemed like they made something new everyday. Some gadget or idea, like every day, was Christmas.” – Donald

35. “We have attachments. But even without a family, I can promise you that—that yearning to be with other people is powerful. That emotion is the foundation of what makes us human.” – Dr. Mann

36. “Yeah, and our mission is to find a planet that can habitate the people living on earth right now. Okay? Plan A does not work if the people on earth are dead by the time we pull it off.” – Cooper

38. “You’re feeling it, aren’t you? The survival instinct. That’s what drove me. It’s what drives all of us. And it’s what’s gonna save us. Cause I’m gonna save all of us. For you, Cooper.” – Dr. Mann

44. “Brand―she’s out there. Setting up camp. Alone, in a strange galaxy. Maybe right now, she’s settling in for the long nap. By the light of our new sun. In our new home.” – Murphy

45. “You said science was about admitting what we don’t know.” – Murphy

Interstellar Quotes on the Wonders of the Universe

47. “Of all these anomalies, the most significant is this―out near Saturn, a disturbance of space-time.” – Romilly

48. “And whoever they are, they appear to be looking out for us. That wormhole lets us travel to other stars. Came along right as we needed it.” – Amelia

51. “I believe it was a brilliant piece of propaganda, that the Soviets bankrupted themselves, pouring resources into rockets and other useless machines.” – Ms. Kelly

52. “You know, one of those useless machines they used to make was called an MRI, and if we had any of those left the doctors would have been able to find the cyst in my wife’s brain, before she died instead of after, and then she would’ve been the one sitting here, listening to this instead of me, which would’ve been a good thing because she was always the calmer one.” – Cooper

53. “I know what Morse code is Murph I just don’t think your bookshelf is trying to talk to you.” – Cooper

54. “Maybe we’ve spent too long trying to figure this out with theory.” – Amelia

55. “Don’t you get it yet, TARS? I brought myself here! We’re here to communicate with the three-dimensional world! We’re the bridge! I thought they chose me. But they didn’t choose me, they chose her!” – Cooper

56. “Somewhere, in their fifth dimension, they saved us.” – TARS

57. “I don’t know, but they constructed this three-dimensional space inside of their five-dimensional reality to allow you to understand it.” – TARS

59. “Your father had to find another way to save the human race from extinction. Plan B—a colony.” – Dr. Mann

60. “You sent people out there looking for a new home.” – Cooper

61. “Not sure of what I’m more afraid of—them never coming back, or coming back to find we’ve failed.” – Dr. Brand

63. “Before you get all teary, try to remember that as a robot, I have to do anything you say.” – TARS

64. “Well not far enough! And now we’re stuck here, until there won’t be anyone on earth left to save!” – Cooper

65. “Today is my birthday. And it’s a special one because you once told me that when you came back, we might be the same age. Well, now I’m the same age that you were when you left―and it’d be really great if you come back soon.” – Murphy

67. Cooper: “Get ready to match our spin with the retro thrusters.”

69. “You’re not listening to this, I know. All these messages are just drifting out there in the darkness.” – Cooper

70. “We love people who have died. Where’s the social utility in that?” – Amelia

71. “No. When you become a parent, one thing becomes really clear. And that’s that you want to make sure your children feel safe. And that rules out telling a 10-year old that the world’s ending.” – Cooper

72. “Listen to me when I say that love isn’t something that we invented. It’s observable―powerful. It has to mean something.” – Amelia

88. “Take you, for example, a father with a survival instinct that extends to your kids. What does research tell us, is the last thing you’re gonna see, before you die? Your children. Their faces. At the moment of death, your mind is going to push you a little bit harder, to survive. For them.” – Dr. Mann

89. “You know why we couldn’t just send machines on these missions, don’t you Cooper? A machine doesn’t improvise well, because you can’t programme the fear of death.” – Dr. Mann

90. Getty: “They gave him a humor setting, to fit in better with his unit. He thinks it relaxes us.”

Cooper: “A giant sarcastic robot! What a great idea.”

TARS: “I have a cue light I can use to show you when I am joking if you like.”

TARS: “Yeah, you can use it to find your way back to the ship after I blow you out the airlock.”

TARS: “Lower than yours, apparently.”

CASE: “TARS talks plenty for both of us.”

More Interstellar Quotes to Ponder On

94. “Six billion people, just imagine that. and every last one of them trying to have it all. This world is not so bad. you are the one who does not belong. Born 40 years too early. My daughter knew it, God bless her. And your kids know it.” – Donald

95. “Cooper, I can’t tell you any more, unless you agree to pilot this craft. You’re the best pilot we ever had.” – Dr. Brand

96. “Absolute honesty is not always the most diplomatic nor the safest form of communication with emotional beings.” – TARS

97. “We didn’t run out of television screens and planes. We ran out of food.” – School Principal

100. “And if we don’t want to repeat the excess and wastefulness of the 20th century then we need to teach our kids about this planet, not tales of leaving it.” – Mrs. Kelly

Are You Willing to Make a Sacrifice for the Sake of Those You Love?

Sacrifice for the sake of humanity is a huge thing to do, especially if it means leaving your family behind. Are you also willing to sacrifice and face all the consequences to save humanity’s future?

This movie shows many unexplainable life events that enrich our lives. It helps us come to the realization that there is still much more to learn in life and there are wonders waiting to be discovered.

These quotes prove that life has a lot of blessings. You’ll also learn the most significant sacrifice a parent can make for their children. These quotes serve as a reminder to appreciate what you have before time runs out.

Which Interstellar quotes do you think are worth sharing? Let’s appreciate it together in the comments section below.