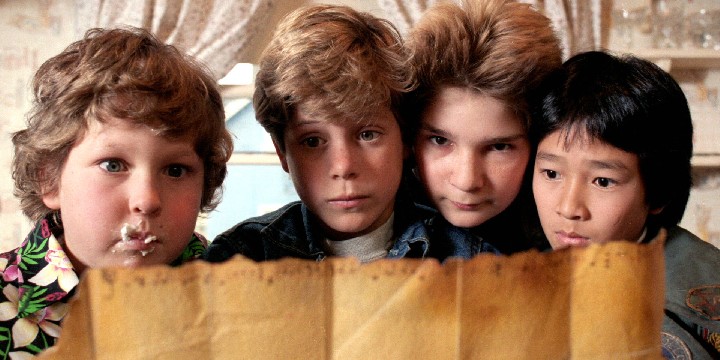 Jump into the thrill and excitement of treasure hunting through this list of the best The Goonies quotes!

The Goonies is a 1985 hit adventure comedy movie. It is about a group of children who found a hidden treasure map while rummaging through the attic.

This discovery leads them to an exciting journey of finding the lost treasure of the legendary pirate named One-eyed Willy.

Following the map, they encounter a family of criminals who desire the treasure and chase after them.

Their race toward the treasure creates hilarious and thrilling interactions that will undoubtedly excite you.

The Goonies is a movie full of fun, thrill, and action.

But, it’s also something that’ll offer you some life lessons on courage and unbreakable friendship.

So, if you’re a fan of treasure hunting and everything fun, this collection of quotes is for you.

And don’t forget to check out these Indiana Jones quotes and Jurassic Park quotes.

4. “Bran, God put that rock there for a reason—and I don’t think you should move it.” – Stef

5. “Yeah, but you know what? This one, this one right here. This was my dream, my wish. And it didn’t come true. So I’m taking it back. I’m taking them all back.” – Mouth

Famous Quotes From The Goonies

8. “You guys, I’m hungry. I know when my stomach growls there’s trouble.” – Chunk

9. Andy: “Do you think there’s really any treasure here?”

Mikey: “Andy, this whole ship is a treasure.”

16. “You know, your voice is kind of nice when your mouth isn’t screwing it up.” – Stef

17. “The only thing we serve here is tongue. You boys like tongue?” – Mama Fratelli

The Goonies Quotes to Reflect On

Mikey: “Home? What home? In a couple more hours, it ain’t gonna be home anymore. Come on, guys, this is our time. Our last chance to see if there really is any rich stuff. We’ve got to.”

20. “But right now they gotta do what’s right for them, ’cause it’s their time. Their time, up there. Down here it’s our time. It’s our time down here. That’s all over the second we ride up Troy’s bucket.” – Mikey

21. Mikey: “How long have you guys been standing there?”

23. “Honest. We went over to Mikey’s Dad’s place and we found this map that said that underneath this place there’s buried treasure.” – Chunk

24. “This is ridiculous. It’s crazy. I feel like I’m babysitting, except I’m not getting paid.” – Stef

25. “In fourth grade, I stole my uncle Max’s toupee and I glued it on my face when I was Moses in my Hebrew School play.” – Chunk

27. “In fifth grade, I knocked my sister Edie down the stairs and I blamed it on the dog.” – Chunk

28. “I’m gonna hit you so hard that when you wake up your clothes will be out of style!” – Brand

30. “When my mom sent me to the summer camp for fat kids and then they served lunch I got nuts and I pigged out and they kicked me out.” – Chunk

Brand: “No, sir. Actually, she’s out at the market buying Pampers for all us kids.”

Data: “That’s what I said! Booby traps! God, these guys.”

33. “I’ve got an idea. Why don’t we just spread chocolate all over the floor and let Chunk eat his way through?” – Mouth

The Goonies Quotes That’ll Remind You of Some Thrilling Scenes

38. Chunk: “Mikey, Mikey, this ain’t the kind of place you want to go to the bathroom in.”

Mama Fratelli: “Why not?”

Chunk: “Because they might have daddy longlegs and, um, dead things, Mikey. Dead things!”

Francis: “Let go of the handle.”

Jake: “I don’t have the handle! Open the lock!”

Memorable The Goonies Quotes to Enjoy

Mouth: “Now they’re his most flattest thing in the world. Let’s go!”

42. Chunk: “Listen, okay? You guys’ll never believe me. There were two cop cars, okay? And they were chasing this four-wheel deal, this real neat ORV, and there were bullets flying all over the place. It was the most amazing thing I ever saw!”

Mikey: “More amazing than the time Michael Jackson came over to your house to use the bathroom.”

Brand: “More amazing than the time you saved those old people from that nursing home fire, right?”

Mouth: “Yeah, and I bet it was even more amazing than the time you ate your weight in Godfather’s pizza, right?”

Chunk: “Okay, Brand. Michael Jackson didn’t come over to my house to use the bathroom. But his sister did.”

45. “Cruising the coast, down in some brews, but no—somebody’s older brother had to go and screw it up—by flunking his driver’s test.” – Clark

46. “Dad! Dad! It’s my marble bag. The Fratellis forgot to check it. I emptied out all of my marbles and put the jewels in. We don’t have to leave the goon docks!” – Mikey

47. “Brandon Walsh! If you don’t bring those kids back, I’m going to commit Harri Krishna!” – Irene

Brand: “What about our lives?”

50. “The marijuana goes in the top drawer. The cocaine and speed go in the second drawer. And the heroin goes in the bottom drawer. Always separate the drugs.” – Mouth

51. “But the worst thing I ever done—I mixed a pot of fake puke at home and then I went to this movie theater, hid the puke in my jacket, climbed up to the balcony, and then, then, I made a noise like this: hua-hua-hua-huaaaaaa—and then I dumped it over the side, all over the people in the audience. And then, this was horrible, all the people started getting sick and throwing up all over each other. I never felt so bad in my entire life.” – Chunk

Short The Goonies Quotes for Everyone Who Enjoyed Their Adventures

Did You Learn Anything About Adventure and Friendship From the Collection?

The Goonies is definitely a favorite that we all watch over and over. On the surface, it may only seem like a story of kids going on a treasure hunt, but more than that, it tells the tale of determination and a deep-rooted friendship.

Going into an adventure requires an immense amount of courage and determination. In the movie, the kids face a dilemma about the possible foreclosure of their homes, which fuels their desire to obtain the treasure. Without this driving force, they won’t be determined to go through all those risky situations during their hunt.

Another thing that makes them fearless is the thought of having each other’s backs. As friends, they’re able to trust and rely on one another, helping them solve the puzzles and triumph over their evil pursuers. Together, they are braver, stronger, and smarter.

Indeed, this movie highlights the importance of good friendship and camaraderie. After all, the greatest and most priceless treasure of all are true friends who will be there to support you, no matter what.

Have you watched The Goonies before? What other lessons did you learn from today’s collection? Join our discussion and leave a comment below.