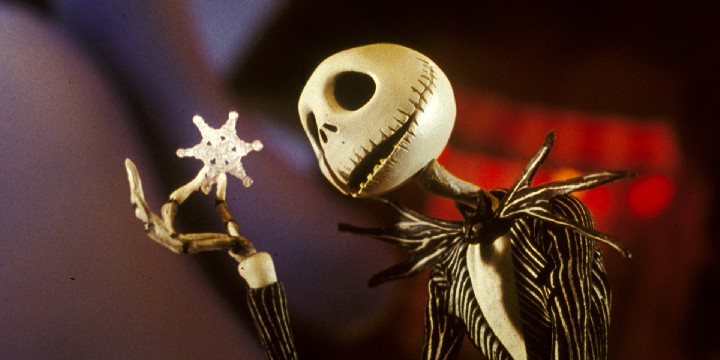 If you’re a fan of The Nightmare Before Christmas, then you’ll undoubtedly love this collection of the top 60 Jack Skellington quotes!

Known as the Pumpkin King, Jack Skellington was made to scare off humans.

He is an extremely tall skeleton who’s well-dressed with a suit, a bow tie, and dress shoes. He’s so great at his role that he can even scare monsters that lived in Halloween Town.

But, he got bored in his own world when he discovered Christmas’s colorful and enchanting land, Christmastown.

Because of that, he decided to take over the town and dress up as Santa—leaving his role as Pumpkin King behind.

Of course, him leaving behind his identity comes with many consequences.

Jack Skellington doesn’t consider what may come from his actions, which resulted in some hilarious but complex scenes.

If you’re curious about what happens in the movie, read through to the end of this list!

And don’t forget to check out Nightmare Before Christmas quotes and Tim Burton quotes.

1. “Eureka! This year, Christmas will be ours!”

3. “Just because I cannot see it, doesn’t mean I can’t believe it!”

4. “That’s not my Christmas. My Christmas is filled with laughter, and joy, and this!”

5. “No animal nor man can scream like I can, with the fury of my recitations!”

6. “And I just can’t wait until next Halloween ‘cause I’ve got some new ideas that will really make them scream. And by God, I’m really gonna give it all my might!”

9. “You know, I think this Christmas thing is not as tricky as it seems! But why should they have all the fun? It should belong to anyone! Not anyone, in fact, but me! Why, I could make a Christmas tree! And there’s not a reason I can find, I couldn’t have a Christmas time! I bet I could improve it, too! And that’s exactly what I’ll do!”

10. “Yet year after year, it’s the same routine. And I grow so weary of the sound of screams.”

13. “Why does nothing ever turn out like it should?”

14. “Oh, there’s an emptiness in my bones that calls out to something unknown.”

15. “I really tasted something swell, that’s right. And, for a moment, why, I even touched the sky and at least I left some stories they can tell.”

16. “The monsters are all missing and the nightmares can’t be found and in their place. There seems to be a good feeling all around.”

17. “There were objects so peculiar. They were not to be believed. All around things to tantalize my brain.”

20. “There’s something out there far from my home. A longing that I’ve never known.”

21. “And sit together—now and forever. For it is plain, as anyone can see. We’re simply meant to be.”

23. “My dearest friend, if you don’t mind, I’d like to join you by your side. Where we can gaze into the stars.”

Iconic Jack Skellington Quotes and One-Liners to Keep In Mind

25. “Leave that no-account Oogie Boogie out of this!”

27. “Christmas time is buzzing in my skull.”

30. “Interesting reaction! But what does it mean?”

31. “Isn’t that wonderful? It couldn’t be more wonderful!”

Hilarious Jack Skellington Quotes for a Fit of Giggles

37. “Sandy Claws—in person. What a pleasure to meet you. Why, you have hands! You don’t have claws at all!”

38. “Since I am dead, I can take off my head to recite Shakespearean quotations.”

39. “Consider this a vacation, Santy. A reward. It’s your turn to take it easy.”

41. “And on a dark cold night, under full moonlight, he flies into the fog like a vulture in the sky and they call him Sandy Claws!”

42. “Now don’t be modest. Who else is clever enough to make my Sandy Claws outfit?”

43. “I excel without ever even trying, with the slightest little effort of my ghostlike charms.”

44. “With the wave of my hand, and a well-placed moan, I have swept the very bravest off their feet.”

45. “They’re celebrating! They’re thanking us for doing such a good job.”

46. “There’s got to be a logical way to explain this Christmas thing.”

48. “Well, at least they’re excited. But they don’t understand that special kind of feeling in Christmas Land. Oh well.”

49. “There’s frost on every window. Oh, I can’t believe my eyes! And in my bones, I feel the warmth that’s coming from inside!”

50. “You don’t need to have another worry about Christmas this year.”

51. “I don’t believe what’s happening to me. My hopes, my dreams, my fantasies.”

52. “I believe it was our most horrible yet! Thank you, everyone.”

52. “There are children throwing snowballs, instead of throwing heads, they’re busy building toys, and absolutely no one’s dead.”

More Jack Skellington Quotes for Fans of the Franchise

55. “Be careful with Sandy Claws when you fetch him. Treat him nicely.”

56. “How dare you treat my friend so shamefully!”

59. “The job I have for you is top secret. It requires craft, cunning, mischief.”

Did These Quotes Make You Think About the Consequences That Your Actions May Entail?

Jack Skellington is an entertaining and exciting character to get to know. However, no character—or person—is perfect. Through Jack’s mistakes and experiences, we learn many things we can apply in real life.

On the surface, it may seem like The Nightmare Before Christmas is just a movie that delves into both Halloween and Christmas. But, more than that, it shows how Jack Skellington’s actions caused a domino effect that was hard for him to control. As in life, if we act without thinking, we might trigger a chain of events that we wouldn’t be able to handle.

Everything started when he kidnapped Santa and tried to act as Santa himself. He tried to take over Christmas without knowing anything about the town’s culture, traditions, and people. Because of his lack of knowledge, he recognizes his mistakes the hard way.

It may be hard to accept that we make mistakes, but it’s a part of life and growth as humans. Think before you act, and make sure you won’t regret anything.

Have you watched The Nightmare Before Christmas before? Did you learn anything from our collection? Comment below!