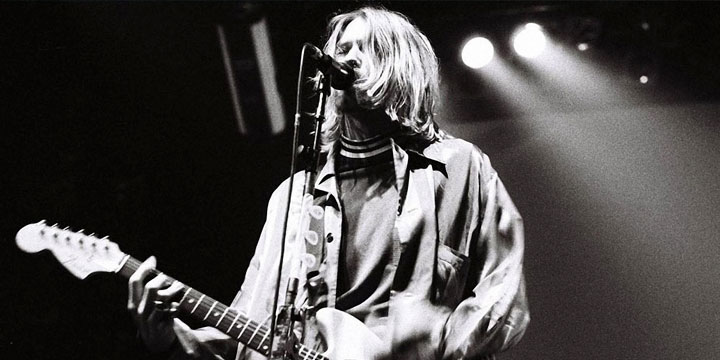 Kurt Cobain might just be one of the most famous names in the music industry. Whether you’re a fan of his or not, his music will make you stop and think about how you’re going about your life.

And, even decades after his passing, his Nevermind album still touches the hearts of millions of people worldwide.

However, people have varying and opposing opinions on Kurt Cobain. Some view him as a devoted father who tried to move past his mistakes, and some see him as a drug addict.

There might have been two sides to him, but his wisdom, raw views on life, and unique perspective are things that can guide us as we navigate our problems and insecurities.

If you’re a fan of his or simply want to learn more about him, this collection will perfectly fit the bill. Scroll through to the end and find some of the most relatable Kurt Cobain quotes!

And make sure to read these Jimi Hendrix quotes and John Lennon quotes.

2. “They laugh at me because I’m different; I laugh at them because they’re all the same.”

3. “Wanting to be someone else is a waste of the person you are.”

6. “Do your own thing. Others own their own thing. If you copy too much, you’ll find yourself in late-night cocktail lounge cover band limbo.”

7. “Either I’ve accepted it or gone beyond insane, where I can deal with it emotionally.”

8. “Practice makes perfect, but nobody’s perfect, so why practice?”

10. “If my eyes could show my soul, everyone would cry when they saw me smile.”

11. “The duty of youth is to challenge corruption.”

14. “Words suck. I mean, everything has been said. Words aren’t as important as the energy derived from music, especially live.”

15. “There are a lot of things I wish I would have done, instead of just sitting around and complaining about having a boring life.”

16. “The finest day I ever had was when tomorrow never came.”

17. “If you die you’re completely happy and your soul somewhere lives on. I’m not afraid of dying. Total peace after death, becoming someone else is the best hope I’ve got.”

19. “Life isn’t nearly as sacred as appreciation of passion.”

23. “There’s good in all of us and I think I simply love people too much—so much that it makes me feel too f*cking sad.”

Kurt Cobain Quotes That Are Packed With Wisdom

25. “Just because you’re paranoid doesn’t mean they aren’t after you.”

26. “I was tired of pretending that I was someone else just to get along with people, just for the sake of having friendships.”

27. “Drugs are a waste of time. They destroy your memory and your self-respect and everything that goes along with your self-esteem. They’re no good at all.”

28. “Birds scream at the top of their lungs in horrified hellish rage every morning at daybreak to warn us all of the truth. But sadly, we don’t speak bird.”

29. “If you ever need anything, please don’t hesitate to ask someone else first.”

31. “Rape is one of the most terrible crimes on earth and it happens every few minutes. The problem with groups who deal with rape is that they try to educate women about how to defend themselves. What really needs to be done is teaching men not to rape. Go to the source and start there.”

38. “I like to complain and do nothing to make things better.”

40. “I never wanted to sing. I just wanted to play rhythm guitar, hide in the back, and just play.”

41. “I just hope I don’t become so blissful I become boring. I think I’ll always be neurotic enough to do something weird.”

42. “I use bits and pieces of others’ personalities to form my own.”

43. “I’ve never been a very prolific person, so when creativity flows, it flows. I find myself scribbling on little notepads and pieces of loose paper, which results in a very small portion of my writings to ever show up in true form.”

44. “I’m a spokesman for myself. It just so happens that there’s a bunch of people that are concerned with what I have to say. I find that frightening at times because I’m just as confused as most people. I don’t have the answers for anything.”

47. “We have this conflict between good and evil and man and woman because there are people doing evil things to other people for no reason, and I just want to beat the sh*t out of them. That’s the bottom line. All I can do is scream into a microphone instead.”

Kurt Cobain Quotes to Give You a Glimpse Into His Mind

48. “I really miss being able to blend in with people.”

49. “I’m so happy because today I found my friends—they’re in my head.”

52. “We’ve always had a sense of humor, I don’t think it’s been translated well.”

53. “I’ve always had a problem with the average macho man; they’ve always been a threat to me.”

54. “Because there is nothing in the world I like more than pure underground music.”

56. “I was looking for something a lot heavier, yet melodic at the same time. Something different from heavy metal, a different attitude.”

57. “Punk is musical freedom. It’s saying, doing, and playing what you want. In Webster’s terms, ‘nirvana’ means freedom from pain, suffering, and the external world, and that’s pretty close to my definition of punk rock.”

58. “I’m disgusted by my own and my generation’s apathy. I’m disgusted at what we allow to go on, by how spineless, lethargic, and guilty we are of not standing up against racism, sexism, and all those other ‘isms’ that the counterculture has been whining about for years.”

59. “I like to make people feel happy and superior in their reaction towards my appearance.”

60. “My mother encouraged me to be artistic. It was written in a contract at an early age that I would be an artist.”

What’s Your Take on Kurt Cobain’s Personality and Past Experiences?

Like many people in the world, Kurt Cobain, unfortunately, had a tough and sad childhood. He’d been forever traumatized and influenced by his parents’ divorce and the community he grew up in. However, from the start, Kurt Cobain knew that he had a passion for music and had some sort of inkling that music would be his outlet and way up.

He was introduced to punk rock, which forever changed his life. This doesn’t mean that everything was sunshine and rainbows after that. Kurt Cobain still struggled between his bad habits and his desire to become a better family man.

This tug of war between the good and the bad made his music so relatable to people. Like everyone else, he wasn’t perfect; he was flawed, he made mistakes, and he was human. Through Kurt Cobain, we learn to be more accepting of our good and our bad sides and how they shape us to be the people we are now.

It’s hard to be perfect and do good all the time. But, having the intention to improve for yourself and your loved ones is a good enough start. So, whenever you feel like you’re being tugged in two different directions like what Kurt Cobain experienced, read through this collection of his best quotes once again!

Have you ever listened to any of Kurt Cobain’s songs? Which of his quotes tugged at your heartstrings? Comment below.