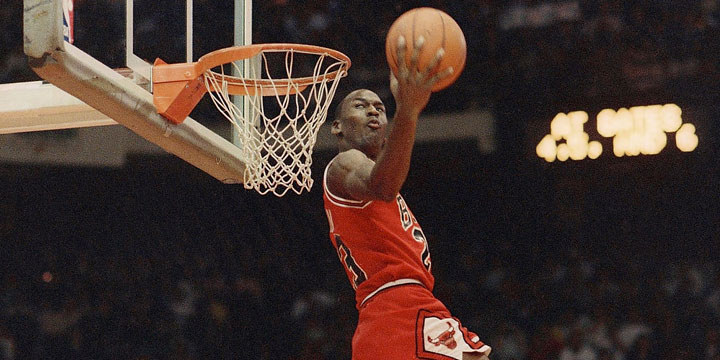 Basketball enthusiast or not, we’re sure you’ll learn a great deal about winning in life through this list of Michael Jordan quotes.

Over the years, this former American basketball player earned many titles and recognitions.

He dominated the sports industry for many years and became known as one of the greatest basketball players of all time.

Michael Jordan is also credited for leading the Chicago Bulls to six NBA championships. Aside from that, he is also a former Olympic athlete and actor.

However, his achievements do not stop there. Since his retirement in 2003, Michael Jordan is also pursuing his career in business.

He currently owns his own NBA basketball team and many other ventures.

It’s clear that Michael Jordan has a lot to teach us about success, not only in sports but also in life.

If you’re curious to learn more about him and his wise words, don’t miss out on this list we’ve created for you.

Read through to the end and gather a quote or two to live by!

And don’t forget to check out these Dick Vitale quotes and Stephen Curry quotes.

1. “Some people want it to happen, some wish it would happen, others make it happen.”

2. “I can accept failure, everyone fails at something. But I can’t accept not trying.”

3. “I’ve missed more than 9,000 shots in my career. I’ve lost almost 300 games. Twenty-six times, I’ve been trusted to take the game-winning shot and missed. I’ve failed over and over and over again in my life. And that is why I succeed.”

5. “My attitude is that if you push me towards something that you think is a weakness, then I will turn that perceived weakness into a strength.”

6. “Learning’s a gift, even when pain is your teacher.”

7. “If you do the work, you get rewarded. There are no shortcuts in life.”

8. “Everybody has talent, but ability takes hard work.”

9. “To be successful, you have to be selfish, or else you never achieve. And once you get to your highest level, then you have to be unselfish. Stay reachable. Stay in touch. Don’t isolate.”

10. “Heart is what separates the good from the great.”

11. “The game is my wife. It demands loyalty and responsibility, and it gives me back fulfillment and peace.”

12. “I don’t do things half-heartedly. Because I know if I do, then I can expect half-hearted results.”

14. “Sometimes, things may not go your way, but the effort should be there every single night.”

15. “If it turns out that my best wasn’t good enough, at least I won’t look back and say I was afraid to try.”

17. “I believe greatness is an evolutionary process that changes and evolves from era to era.”

18. “It’s heavy-duty to try to do everything and please everybody. My job was to go out there and play the game of basketball as best I can. People may not agree with that. I can’t live with what everyone’s impression of what I should or what I shouldn’t do.”

19. “I want to wake up every day and do whatever comes to my mind, and not feel pressure or obligations to do anything else in my life.”

Michael Jordan Quotes to Motivate You

21. “Obstacles don’t have to stop you. If you run into a wall, don’t turn around and give up. Figure out how to climb it, go through it, or work around it.”

22. “I know fear is an obstacle for some people, but it is an illusion to me. Failure always made me try harder the next time.”

23. “Once you leave the ground, you fly. Some people fly longer than others.”

24. “I realized that if I was going to achieve anything in life, I had to be aggressive. I had to get out there and go for it.”

25. “You have competition every day because you set such high standards for yourself that you have to go out every day and live up to that.”

26. “Every time I feel tired while I am exercising and training, I close my eyes to see that picture, to see that list with my name. This usually motivates me to work again.”

27. “My father used to say that it’s never too late to do anything you wanted to do. And he said you never know what you can accomplish until you try.”

Wise Michael Jordan Quotes That Are Packed With Life Lessons

29. “It is easy to choose a path of anonymity and lead an empty life. But to strive hard and lead an impactful life, one needs a burning desire to realize dreams.”

31. “You must expect great things of yourself before you can do them.”

32. “If you accept the expectations of others, especially negative ones, then you will never change the outcome.”

34. “Never say never, because limits, like fears, are often just an illusion.”

42. “When I lose the sense of motivation and the sense to prove something as a basketball player, it’s time for me to move away from the game.”

43. “If you start to think about who is going to win the championship, you’ve lost your focus.”

44. “There is no such thing as a perfect basketball player and I don’t believe there is only one greatest player either.”

45. “The game has its ups and downs, but you can never lose focus of your individual goals and you can’t let yourself be beaten because of lack of effort.”

46. “I want to be perceived as a guy who played his best in all facets, not just scoring—a guy who loved challenges.”

More Michael Jordan Quotes That Are Worth Reading

48. “I hope the millions of people I’ve touched have the optimism and desire to share their goals and hard work and perseverance with a positive attitude.”

49. “I realize that I’m Black, but I like to be viewed as a person, and this is everybody’s wish.”

50. “The game of basketball has been everything to me—my place of refuge, the place I’ve always gone where I needed comfort and peace. It’s been the site of intense pain and the most intense feelings of joy and satisfaction. It’s a relationship that has evolved over time, giving me the greatest respect and love for the game.”

What Did You Learn About Failure and Getting Back Up Again From Michael Jordan?

Aside from basketball-related terms, one of the top words we think of when we hear Michael Jordan’s name is “perseverance.” This is because he knows, understands, and accepts his failures and chooses to move forward using them as stepping stones.

He might have had many missed shots and wrong decisions in life, but Michael Jordan rose above every challenge and became a success. This was all possible because of persistence and dedication.

Many of us look at failure as a stop sign—something that halts our progress and keeps us from moving forward. Yet, we fail to realize that these instances are necessary for us to grow and become better individuals. Instead of perceiving them negatively, look at them as a start of a new opportunity.

After all, as people say, “When one door closes, another one opens.” Let’s all learn from Michael Jordan; try again, keep moving, and continuously try to find new paths that’ll lead you to your goals. It will be challenging, but if we genuinely love what we’re doing and are dedicated to succeeding, anything and everything will be possible.

With that, we hope this list of Michael Jordan quotes was able to open your eyes to the value of hard work and perseverance. Life isn’t always fun, but brighter days will definitely be ahead once we get through the hard times.

Are you a fan of Michael Jordan? Did we miss any of his quotes? Share your thoughts below.