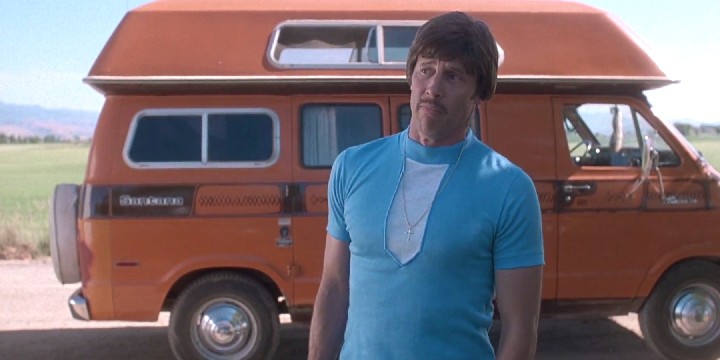 Learn about how important it is to move on from the past and be present through these Uncle Rico quotes.

Uncle Rico is a character in Napoleon Dynamite who viewers had mixed feelings about.

Some disliked him because of his immature personality and for making Napoleon’s high school life even more difficult.

However, some can feel the pain he’s felt ever since he lost the chance to be a star football player.

On the flip side, Uncle Rico constantly tried to get his life together by being productive and working with Kip.

It’s easy to judge him, but maybe what we should do is actually listen to what he’s feeling.

Maybe through that, we’ll understand his emotions, what he’s going through, and what has to happen for his life to improve.

We’ve compiled some quotes that’ll unveil more of his character. Join us as we get some great takeaways from his life that will help us grow, be present, and be grateful in life.

And don’t miss out these Napoleon Dynamite quotes and Office Space quotes.

2. “What, are you already losing your steam?”

3. “Why don’t we take this somewhere a little more private?”

6. Napoleon: “Gosh! What the flip was grandma doing at the sand of dunes?”

Uncle Rico: “She was on a date with her boyfriend.”

Uncle Rico: “Well, I could’ve told you that.”

8. “Lance you look like a strong young pup, why don’t you see if you can give this a nice tear? Don’t hurt yourself now.”

9. Napoleon: “What! Since when does she go to the dunes?”

Uncle Rico: “Looks like there’s a lot you don’t know about.”

Napoleon: “Everybody at school thinks I’m a frickin’ idiot because of you!”

Napoleon: “Get off of me, you bodaggit.”

Napoleon: “Yes. We need to pick her up too.”

Uncle Rico: “Well, Uncle Rico’s got a sale to finalize in Bonita in five minutes.”

17. Uncle Rico: “You know Deborah you have striking features, such a soft face should be complemented with a soft body.”

Uncle Rico: “My friends and clients call me Uncle Rico.”

18. Uncle Rico: “Could you do me a favor and give a couple of these to your mom for me? Just tell her she can pass them out to her friends or whoever.”

Uncle Rico: “Now you gals feel free to give me a call if you use some.”

19. “Poor kid, I’ve been takin’ care of him while his grandma’s in the hospital. He still wets the bed and everything.”

20. Starla: “After using Bust Plus, I have such big boobs—I don’t feel comfortable reading this.”

Starla: ”Well, this is kind of personal.”

Uncle Rico: “Right, well let’s get down to the point, what size do you take?”

Uncle Rico: “How do you feel about that?”

22. “Now let’s just say—you are somewhere around here. With three weeks of my product, you’re gonna be about here.”

23. “How much do you wanna make a bet I can throw a football over them mountains? Well, if coach woulda put me in the fourth quarter, we’d have been state champions. No doubt. No doubt in my mind. You better believe things had been different. I’d have gone pro in a heartbeat. I’d be making millions of dollars and living in a big ol’ mansion somewhere, soaking it up in a hot tub with my soul mate.”

26. “Kip, I reckon you know a lot about cyberspace? You ever come across anything—like time travel?”

Uncle Rico: “She got jealous. Said I was still livin’ in ‘82. How about your girlfriend?”

Uncle Rico Quotes for Those Who Want to Learn About Business

28. “Now if you look right here, we have Sally Johnson from Manitou, Colorado. Can you read that testimonial right there?”

30. “Why don’t you sell some to your girlfriend. Might as well do somethin’ while you’re doing nothin’.”

31. “We also need some way to make us look official like we got all the answers.”

32. “Just a little east of the cemetery is a good little area, but don’t go down here ‘cause they don’t have any money.”

34. “We need like some name tags with our picture on it, all laminated and what not. I mean, we gotta look legit man.”

35. “‘Kay then. Now, this ain’t yer run-a-the-mill crapperware guys, these are some serious Nupont micro-fibers to make helmets and special tiles for the space shuttle. ‘Kay?”

36. Uncle Rico: “Well what about work? Have you studied up on the new product?”

Uncle Rico: “Do you know it back to front?”

39. “Hey, you know, I got a little project that we might be able to make a little moola with.”

40. “I’m gonna tell you somethin’ right now. While you’re out there playing patty cake with your friend Pedro, your Uncle Rico is makin’ 120 bucks.”

41. “Napoleon, it looks like you don’t have a job. So why don’t you get out there and feed Tina.”

42. “Napoleon, you know we can’t afford the fun pack! What, do you think money grows on trees in this family? Take it back! And get some Pampers for you and your brother while you’re at it.”

43. Kip: “Yeah. Grandma’s still payin’ per minute. She gets kinda pissed at me sometimes ‘cause I’m on there so long.”

Uncle Rico: “I’ll bet she does. I’ll tell you something, I’d be throwin’ you out the window.”

Uncle Rico: “All right, you just start a little earlier, that’s all. Or else work afterward. How long is the chat room?”

45. “Grandma took a little spill at the sand dunes today. Broke her coccyx.”

47. “I sent him an email sayin’ I was gonna notify the authorities if I didn’t get a refund in full, but don’t you ever wish that you could go back? I mean with all the knowledge you have now?”

What Were the Necessary Steps You Took to Move On From Your Failures in Life?

Harking back on your past affects your present life. After all, it’s pretty unhealthy to continuously let yourself be a prisoner of what-ifs and other possibilities. Instead, learn to appreciate the present and look for what you can do now to help yourself find happiness.

We may sometimes share the same sentiments as Napoleon when it comes to Uncle Rico’s actions. It’s a bit off-putting to see and hear a grown man constantly bringing up his past mistakes and failures. However, we should understand that though he’s an adult, he’s still a human being—someone who feels and struggles with his past and missed future.

If we just take the time to read between the lines, we’ll realize that what Uncle Rico needs is comfort. Step into his shoes and realize that it’s not easy to move on in life when we think the past robbed us of opportunities that could’ve given us a better life in the present.

We all have been—or are still living in the past—but we have to move on. There are a lot of great things to look forward to in life. So, break away from the chains of the past and be grateful and excited for life again.

Can you relate to Uncle Rico? Have you watched Napoleon Dynamite? Please, share your thoughts below!