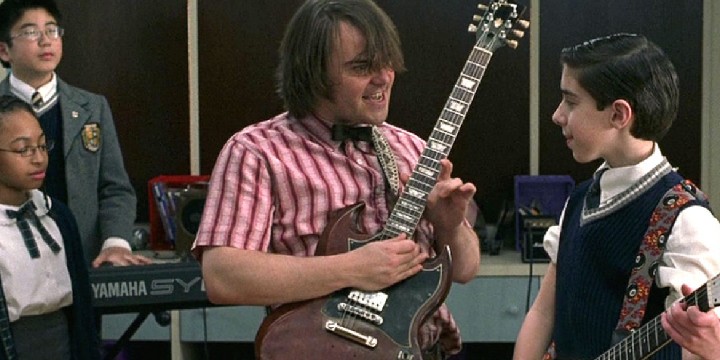 Be inspired to be fearless in chasing your dreams by reading these School of Rock quotes.

School of Rock is a 2003 comedy movie starring Jack Black. It tells the story of Dewey Finn, a struggling musician who formed a band made up of fourth-grade kids to win a contest and use the prize money to pay his rent.

Though the plot already sets the tone for a comedy movie, the elements of youth, collectivism, and passion for music will surely inspire anyone who watches it.

This is why it is no surprise that the show grossed millions of dollars worldwide and earned good reviews from critics.

So, don’t miss out on these fun and inspiring lines by adding this list to your must-reads now!

Let this collection fire you up and help you pave the road toward achieving your ambitions in life.

Read the best School of Rock quotes below.

And don’t forget to check out these Nacho Libre quotes and Dead Poets Society quotes.

1. “The School of Rock. And we shall teach rock and roll to the world.” – Dewey Finn

2. “Now, you played hard in here, people, and I am proud of every last stinking one of you. So let’s just give this everything we got. We may fall on our faces, but if we do, we will fall with dignity with a guitar in our hands and rock in our hearts! And in the words of AC/DC, ‘We roll tonight to the guitar bite, and for those about to rock, I salute you.'” – Dewey Finn

3. “Sell my guitars? Would you tell Picasso to sell his guitars?” – Dewey Finn

4. “My name is Dewey Finn. And no, I’m not a licensed teacher, but I have been touched by your kids. And I’m pretty sure that I’ve touched them.” – Dewey Finn

5. “I don’t wanna hang out with wannabe corporate sellouts. I’m gonna form my own band. We’re gonna start a revolution. And you’re gonna be a funny little footnote on my epic ass!” – Dewey Finn

6. “I service society by rocking, okay? I’m out there on the front lines liberating people with my music!” – Dewey Finn

7. “God of Rock, thank you for this chance to kick ass. We are your humble servants. Please give us the power to blow people’s minds with our high voltage rock. In your name, we pray, Amen.” – Dewey Finn

8. “Look, you know what? That’s not even the point. The thing is, you’re a rock star now. All you gotta do is just go out there and rock your heart out. People are gonna dig you, I swear. Let’s go out here, and show them what you got. What do you say?” – Dewey Finn

9. “Yes! But, you can’t just say it, man. You’ve gotta feel it in your blood and guts! If you wanna rock, you gotta break the rules. You gotta get mad at the Man! And right now, I’m the Man. That’s right, I’m the Man, and who’s got the guts to tell me off? Huh? Who’s gonna tell me off?” – Dewey Finn

10. “Tomika, hey, you’ve got something everybody wants. You’ve got talent, girl. You have an incredible singing voice, and I’m not just saying that.” – Dewey Finn

11. “Come on, man. We’re on a mission. One great rock show can change the world. Look out the window.” – Freddy Jones

12. “This is a bass guitar. And it’s the exact same thing, but instead of playing it like this, you tip it on the side cello, you got a bass.” – Dewey Finn

13. “Give up, just quit, because, in this life, you can’t win. Yeah, you can try, but in the end, you’re just gonna lose, big time because the world is run by the Man.” – Dewey Finn

14. “You’ve heard of Aretha Franklin, right? She’s a big lady. But when she sings, she blows people’s minds. Everyone wants to party with Aretha!” – Dewey Finn

15. “I pledge allegiance to the band of Mr. Schneebly and will not fight him for creative control, and will defer to him on all issues related to the musical direction of the band.” – Dewey Finn

16. “I’ve just been informed that all your children are missing.” – Rosalie Mullins

18. “You know who else has a weight issue? Me. But once I get up on stage, start doing my thing, people worship me. Because I’m sexy and chubby, man.” – Dewey Finn

19. “Summer, I didn’t want to tell you this in front of the class, but I made a special position just for you—band manager.” – Dewey Finn

Hilarious School of Rock Quotes That Will Always Remain Relevant

23. “It will test your head and your mind and your brain too.” – Dewey Finn

School of Rock Quotes to Revisit the Movie’s Funniest Scenes

28. “Mad? I’m furious! I’m horrified! But your show and performance were so incredible, spectacular, and so amazing! I can’t believe it.” – Rosalie Mullins

29. Michelle: “Are you going to teach us anything? Or are we just going to sit here?”

Dewey Finn: “Just do whatever you want.”

Summer Hathaway: “I want to learn from my teacher.”

Dewey Finn: “Besides that! Freddy, what do you like to do?”

30. Rosalie Mullins: “No. No, we don’t use corporal punishment here.”

Dewey Finn: “No. It means I was drunk yesterday.”

34. “We will continue our lecture on the Man when we return. Have a good music class.” – Dewey Finn

38. “You don’t have to worry about me because I’m a hard-ass. And if a kid gets out of line, I got no problem smacking them in the head.” – Dewey Finn

41. “In the end of time, there was a man who knew the road. And the writing was written on the stone. In the ancient time, an artist led the way, but no one seemed to understand. In his heart, he knew the artist must be true, but the legend of the rent was way past due! Well, you think you’ll be just fine without me, but you’re mine! You think you can kick me out of the band? Well. There’s just one problem there. The band is mine! How can you kick me out of what is mine? Well, you’re not hardcore unless you live hardcore, but the legend of the rent was way hardcore.” – Dewey Finn

42. “Ms. Mullins, she’s the Man. And the Man ruined the ozone, he’s burning down the Amazon, and he kidnapped Shamu and put her in a chlorine tank! And there used to be a way to stick it to the Man. It was called rock and roll, but guess what, oh no, the Man ruined that too with a little thing called MTV!” – Dewey Finn

43. “Do you know that kids at other schools just have fun all the time? They’re running around. There’s no discipline. They’re happy. It’s anarchy. This is the best school I have ever taught at. I swear.” – Dewey Finn

46. “I’m talking about bands that rock. Led Zeppelin! Don’t tell me you guys have never gotten the Led out? Jimmy Page, Robert Plant? Ring any bells? What about Sabbath?” – Dewey Finn

47. “I heard you in music class. You guys can really play. Why didn’t anyone tell me?” – Dewey Finn

50. “You wouldn’t come to work with a hangover unless you were an alcoholic. Dude, you got a disease!” – Freddy Jones

51. “Are we going to be goofing off like this every day?” – Freddy Jones

52. “Rock isn’t about getting an A. Sex Pistols never won anything.” – Freddy Jones

53. “You’re gonna talk to me about style? You can’t even dress yourself. Look at that bow tie.” – Billy

More School of Rock Quotes for You to Enjoy

56. “I liked it, Mr. Schneebly. I thought it was really catchy.” – Summer Hathaway

57. “That was incredible! Oh my gosh! The light shows, the guitar solos and was it really you playing?” – Rosalie Mullins

58. “I don’t want to be a cheerleader. Look, my mother’s a room parent, and she’s not gonna be happy when she hears about this.” – Summer Hathaway

59. “I can’t make a mistake! I gotta be perfect! And that pressure has turned me into something that I never wanted to be!” – Rosalie Mullins

Have You Discovered Your Passion?

Reality can be too harsh, and pursuing a career out of our passions may seem impossible. Adults even discourage us from doing what we wish to and expressing ourselves for who we are at an early age. For many people, a career in the arts means an unsuccessful life with little to no wealth; this is a mindset we must change and alter.

One of the lessons that we can learn from the School of Rock—even with almost two decades since its release—is to believe in yourself and rock on. This is a message for musicians and everyone who needs to fire up their spirit and be brave to choose to work on their dreams. Life is hard, but it is also short, so we must prioritize our happiness and make the most out of living.

Remember that success isn’t only counted in terms of material wealth. In fact, what matters the most is that you’re living your best life—a life full of happiness, creativity, and freedom.

We hope that these School of Rock quotes were able to keep the fire in your heart burning. Keep dreaming and hustling, and learn to enjoy the things that come your way! Go out there and live your best life.

Have you watched the School of Rock? Which line is your favorite? Comment below!