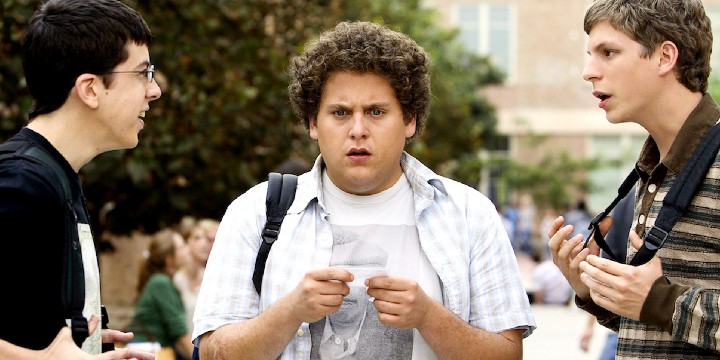 These Superbad quotes will provide you with hilarious but deep insights into adolescence, growing up, and life as a teenager!

Superbad is a comedy movie that took the world by storm. It’s a simple story about high school teenagers looking not only for girls, beer, and pleasures but also for themselves.

Life is hard as it is, but maybe especially so when you’re in high school. This is the time when you’re unsure of who you are and what you want to do in life moving forward.

Superbad is an excellent movie to watch if you feel the same because you’ll certainly relate to it!

If you haven’t seen it yet, get a sneak peek of its best lines from our collection below. Prepare to be surprised by some hilarious truths about adolescence!

And make sure to read these 21 Jump Street quotes and Major Payne quotes.

3. “Man I’m about to graduate, they should be sucking on my b*lls*ck, that’s the least they can do for stealing four years of my life.” – Evan

4. “I kinda had this problem, something like 8% of kids do it, but whatever. For some reason, I don’t know why, I would just kind of sit around all day—and draw pictures of dicks.” – Seth

5. “McLovin? What kind of a stupid name is that, Fogell? What, are you trying to be an Irish R&B singer?” – Evan

6. “I joined this class because I thought I was going to be cooking with a partner. But she’s never here, and I don’t get twice the grades for doing all the work.” – Seth

7. Officer Michaels: “Yeah, McLovin, how is it going with the ladies?”

Fogell: “It’s not the going I’m worried about—but the coming.”

8. “Prepare to be f*cked by the long dick of the law.” – Officer Michaels

9. “They let you pick any name you want when you get down there.” – Fogell

10. “He is the sweetest guy. Have you ever looked into his eyes? It was like the first time I heard the Beatles.” – Seth

11. “So I gotta sit here and eat my dessert alone like I’m f*cking Steven Glansberg.” – Seth

13. “We should be guiding your c*ck, not blocking it.” – Officer Michaels

14. “It’s just not fair that they get to flaunt that stuff, you know—and like, I have to hide every erection I get. Just imagine if girls weren’t weirded out by our boners and stuff, and just wanted to see them. That’s the world I one day want to live in.” – Evan

15. “You know what that means? By some divine miracle, we were paired up and she actually thought of me. Thought of me enough to decide that I was the guy she would trust with the whole funness of her party. She wants to f*ck me, she wants my dick in and around her mouth.” – Seth

Officer Michaels: “It is—awesome! I mean I’ve only had mine for like a few months, but I’ll tell you, it’s like having two c*cks. If one of your c*cks could kill someone.”

19. “Two weeks hand job, one-month blow job, whatever, whatever. And then, I make her my girlfriend. And I’ve got like two solid months of sex. By the time college rolls around I’ll be like the Iron Chef of pounding vag.” – Seth

Evan: “Yeah—they said that would happen in health class.”

21. “Do you have any normal-sized clothes or do you only shop at the Baby Gap?” – Seth

Evan: “Yours would be too—if you were a man.”

25. “Give me that. All right, you look like a future pedophile in this picture, number one. Number two: it doesn’t even have a first name. It just says ‘McLovin!’” – Seth

27. “That’s the coolest f*cking story I’ve ever heard in my entire life! That’s insane. Is it—can I hear it again, do you have time?” – Seth

28. “Why the f*ck would it be between that and Muhammad?! Why don’t you just pick a common name like a normal person?” – Seth

29. “Becca’s been looking for you. She said something about blowing you.” – Party Teen

31. “You know what I do? I flip my boner up into my waistband. It hides it and it feels awesome. I almost blew a load into my belly button.” – Seth

33. “Every day, hundreds of kids go into the liquor store with fake IDs, and every single one says they’re 21. How many 21-year-olds do you think there are in this town? It’s called f*cking strategy, all right?” – Fogell

35. Evan: “I heard she got breast reduction surgery.”

Seth: “What? That’s like slapping God across the face for giving you a beautiful gift.”

Evan: “She had back problems, man.”

Evan: “It’s not just making them smaller. They completely reshaped them. They make them more supple, symmetrical.”

36. “Look, we all know Home-ec is a joke, no offense, it’s just that everyone takes this class to get an A, and it’s bullshit, and I’m sorry. I’m not putting down your profession, but it’s just the way I feel.” – Seth

38. Seth: “You dropped your purse, ma’am. Would you like me to help you with your groceries?”

Old Lady: “Well, that would be a lovely young man. Would you like me to buy you alcohol?”

39. “This is our last party as high school people. I fully ignored my hatred for Becca in coming up with this plan.” – Seth

Did Our Collection Teach You About the Realities of Adolescence?

Life in high school is an extraordinary experience for every adolescent who goes through it. It is said to be the most exciting and happy time in a student’s life, but it’s also very confusing, and at times, discouraging. Indeed, our high school experiences are things that would never leave our hearts.

Superbad was released 15 years ago, but the movie’s essential life lessons are more relevant than ever. For teens, it provided a set of rules of what to do and what not to at the end of high school and the start of college.

But, more than that, it serves as a reminder to learn more about yourself and learn from your mistakes. It’s also important to remember to enjoy your high school years as much as possible before entering the frightening world of adulthood!

So, did you enjoy reading our collection? Do you have a favorite quote to share? Please, leave a comment down below.