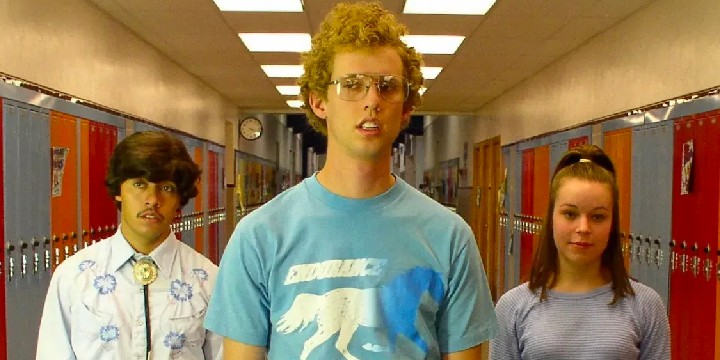 Enjoy these top 50 Napoleon Dynamite quotes that’ll give you a glimpse into each character’s personality!

Napoleon Dynamite is composed of side plots that give us an overview of each character’s life.

Through this, we’re given a sneak peek of the weaknesses and motivations that made the story more than just about comedy and mischances.

Napoleon, the main protagonist, is an outcast teenage boy.

But, he refuses to play the victim and even encourages us to speak up for ourselves. This is a lesson people all over the world can learn from and live by.

More than the lessons we learn from him, we also take valuable insights from characters like Deb, Kip, and Uncle Rico.

Through their everyday experiences, we understand the value of hard work, perseverance, and how to move forward.

No one can contest that Napoleon Dynamite is more than your average comedy.

So, if you enjoyed the movie as much as we did, then we’re sure you’ll love this collection of quotes!

Make sure you don’t miss out on some of its best and funniest lines by reading the list below.

And don’t forget to check out these Uncle Rico quotes and Office Space quotes.

Napoleon: “The worst day of my life. What do you think?”

2. Trisha: “I wanted to thank you for the beautiful drawing you did of me, it’s hanging in my bedroom.”

Napoleon: “Really? It took me like three hours to finish the shading on your upper lip. It’s probably the best drawing I’ve ever done.”

Napoleon: “You know, like nunchuck skills, bow hunting skills, computer hacking skills. Girls only like guys who have great skills.”

4. Kid on the school bus: “What are you going to do today, Napoleon?”

Napoleon: “Whatever I feel like I want to do. Gosh!”

Uncle Rico: “She didn’t tell me anything.”

Napoleon: “Too bad, she said she doesn’t want you here when she gets back because you’ve been ruining everybody’s lives and eating all our steak.”

6. “Is that what you’re trying to do? Ruin my life and make me look like a freakin’ idiot!?” – Napoleon

7. Uncle Rico: “I wish you wouldn’t look at me like that, Napoleon.”

Napoleon: “I wish you’d get out of my life and shut up.”

8. “Just tell them that their wildest dreams will come true if they vote for you.” – Napoleon

10. “It’s pretty much my favorite animal. It’s like a lion and a tiger mixed—bred for its skills in magic.” – Napoleon

Napoleon Dynamite Quotes From Napoleon Himself

12. “Sorry I’m late. I just got done taming a wild honeymoon stallion for you guys.” – Napoleon

13. “I see you’re drinking one percent. Is that ‘cause you think you’re fat? ‘Cause, you’re not. You could be drinking the whole thing if you wanted to.” – Napoleon

17. “Well, I have all your equipment in my locker. You should probably come get it ‘cause I can’t fit my nunchucks in there anymore.” – Napoleon

18. “You know, there’s like a butt-load of gangs at this school. This one gang kept wanting me to join because I’m pretty good with a bo staff.” – Napoleon

20. “Hey, how’s it goin’? Those egg rolls are looking pretty good. I might get me some later, I don’t have any money right now. You know, I think I’m just gonna get me one of them lotto tickets. My wife says I gotta stop but I’m just feeling real positive today and I wanted to try out my luck and.” – Napoleon

21. “It’s a liger. It’s probably my favorite animal. It defends itself with its growing skills in the field of magic.” – Napoleon

24. “LaFawnduh is the best thing that has ever happened to me. I’m 100% positive she’s my soul mate. Don’t worry Napoleon, I’m sure there’s a babe out there for you too. Peace out.” – Kip

26. “Napoleon, it looks like you don’t have a job. So why don’t you get out there and feed Tina?” – Uncle Rico

27. “How much you wanna make a bet I can throw a football over them mountains? Well, if coach woulda put me in the fourth quarter, we would’ve been state champions. No doubt. No doubt in my mind. You better believe things had been different. I’d have gone pro in a heartbeat. I’d be making millions of dollars and living in a big ol’ mansion somewhere, soaking it up in a hot tub with my soul mate.” – Uncle Rico

28. “Napoleon, you know we can’t afford the fun pack. What, do you think money grows on trees in this family? Take it back! And get some Pampers for you and your brother while you’re at it.” – Uncle Rico

29. “I’m gonna tell you somethin’ right now. While you’re out there playing patty cake with your friend Pedro, your Uncle Rico is makin’ 120 bucks.” – Uncle Rico

30. “We need like some name tags with our picture on it, all laminated and what not. I mean, we gotta look legit man.” – Uncle Rico

31. “If you vote for me all of your wildest dreams will come true. Thank you.” – Pedro

32. “Just draw a picture of the girl you want to take out—and give it to her for like a gift or something.” – Pedro

33. ”Well, when I came home from school, my head started to get really hot. So I drank some cold water, but it didn’t do nothing. So I laid in the bathtub for a while, but then I realized that it was my hair that was making my head so hot. So I went into the kitchen, and I shaved it all off. I don’t want anyone to see.” – Pedro

Napoleon Dynamite Quotes From Tina, Deb, and Others

34. “It’s Deb and I am calling to let you know that I think that you are a shallow friend.” – Deb

36. “I’m Rex, founder of the Rex Kwan Do self-defense system! After one week with me in my dojo, you’ll be prepared to defend yourself with the strength of a grizzly, the reflexes of a puma, and the wisdom of a man.” – Rex

37. “And here we have some boondoggle keychains. A must-have for this season’s fashion.” – Deb

39. “At Rex Kwan Do, we use the buddy system. No more flying solo. You need somebody watching your back at all times. Second off, you’re gonna learn to discipline your image. You think I got where I am today because I dressed like Peter Pan over here?” – Rex

40. “Look, Pedro, I don’t know how they do things down in Juarez, but here in Idaho, we have a little something called pride. Understand? Smashing in the face of a pinata that resembles Summer Wheatley is a disgrace to you, me, and the entire Gem State.” – Principal Svadean

Napoleon: “Well, you have a sweet bike. And you’re really good at hooking up with chicks. Plus you’re like the only guy at school who has a mustache.”

Napoleon: “So me and you are pretty much friends by now, right?”

Napoleon: “So you got my back and everything?”

Napoleon: “My woman. I’m taking to the dance.”

Pedro: “Did you draw her a picture?”

Napoleon: “Heck yes I did.”

44. Napoleon: “I told you. I spent it with my uncle in Alaska, hunting wolverines.”

Napoleon: “Yes, like 50 of ‘em! They kept trying to attack my cousins. What the heck would you do in a situation like that?”

Kip: “Your mom goes to college!”

Pedro: “That girl over there.”

Napoleon: “Summer Wheatly? How the heck are you gonna do that?”

Pedro: “Build her a cake or something.”

47. “Last week, Japanese scientists explaced—placed explosive detonators at the bottom of Lake Loch Ness to blow Nessie out of the water. Sir Cort Godfrey of the Nessie Alliance summoned the help of Scotland’s local wizards to cast a protective spell over the lake and its local residents and all those who seek for the peaceful existence of our underwater ally.” – Napoleon

Hilarious Napoleon Dynamite Quotes That Will Make You Chuckle

48. Napoleon: “Stay home and eat all the freaking chips, Kip.”

Kip: “Napoleon, don’t be jealous that I’ve been chatting online with babes all day. Besides, we both know that I’m training to become a cage fighter.”

Napoleon: “Since when Kip? You have the worst reflexes of all time.”

Napoleon: “Could you just go get her for me?”

Napoleon: “Well, just tell her to come get me.”

Kip: “Well, have you talked to the school nurse?”

Napoleon: “No, she doesn’t know anything.”

50. Uncle Rico: “All right, you just start a little earlier, that’s all. Or else work afterward. How long is the chat room?”

Kip: “Geez, sometimes up to three or four hours maybe—maybe not—.”

Uncle Rico: “You pay the bills for that? Does that cost money every time you’re on, like for minutes on the phone?”

Kip: “Yeah, Grandma’s still paying per minute. She gets kinda pissed at me sometimes ‘cause I’m on there so long.”

Uncle Rico: “I bet she does. I’ll tell you something, I’d be throwing you out the window.”

Did You Gain Insights You Can Apply to Your Day-To-Day Life Through These Napoleon Dynamite Quotes?

Napoleon Dynamite is like a jigsaw puzzle. The combination of different subplots allowed us to see the totality of its beauty and helped us appreciate the lessons even more.

It doesn’t have extremely significant events; we just see them live their everyday lives. Through this, they learn lessons on overcoming drawbacks in life and love. But, the movie’s so masterfully crafted that those little moments the characters experience are enough to keep us coming back for more.

For one, Kip, Uncle Rico, and Deb’s hard work to make ends meet and succeed is something to look up to. Life will always throw you problems, but these characters refuse to suffer from them.

The second example is Napoleon’s way of dealing with bullies. At one point or another, we may have come across these types of people. But, he taught us that you don’t have to be the stronger or cooler guy to stand up for yourself and others.

These are just two of the many beautiful takeaways from this teen comedy movie. Make sure you remember the lessons you’ve learned from this list the next time you re-watch Napoleon Dynamite and share your insights with us, too!

Who is your favorite character in Napoleon Dynamite? Did we miss any good quotes? List them below!