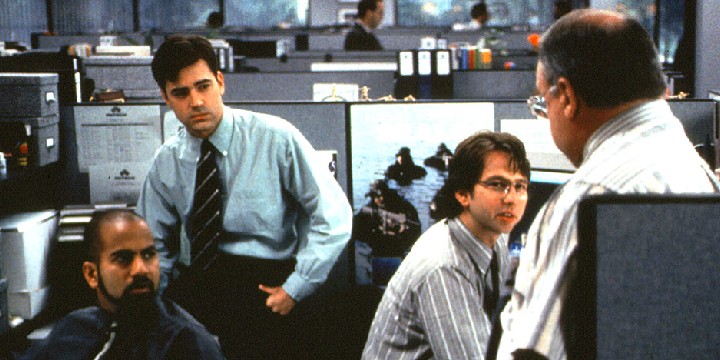 Whether you’re weary and tired of your job or just need some good laughs, this collection of Office Space quotes will fit the bill!

Office Space’s main protagonist is Peter Gibbons—a man who just hates and is tired of his job as a programmer in a company called Initech.

Having this dilemma, his girlfriend persuades him to undergo a hypnotherapy session.

But, during therapy, his therapist died from a heart attack and left him in a relaxed state. Through this, he had the realization that there’s more to life than just work.

Indeed, this movie is packed with humor and wit and will never fail to make its viewers stop thinking about their life decisions.

It makes you ponder on questions like, “Am I doing the thing that I’m most passionate about?”

So, if you find yourself thinking about the same things, this collection might just be for you!

And don’t forget to check out these Napoleon Dynamite quotes and Clerks quotes.

2. “Our high school guidance counselor used to ask us what you would do if you had a million dollars and didn’t have to work. And invariably, whatever you’d say, that was supposed to be your career.” – Peter

4. “Eight, Bob. So that means when I make a mistake, I have eight different people coming by to tell me about it. That’s my only real motivation is not to be hassled, that and the fear of losing my job. But you know, Bob, that will only make someone work just hard enough not to get fired.” – Peter

5. “Peter, most people don’t like their jobs. But you go out there, and you find something that makes you happy.” – Joanna

6. “I did absolutely nothing, and it was everything I thought it could be!” – Peter

7. “Human beings were not meant to sit in little cubicles staring at computer screens all day, filling out useless forms and listening to eight different bosses drone on about mission statements!” – Peter

8. “Good luck with your layoffs, all right? I hope your firings go really, really well.” – Peter

10. “When you come in on Monday and you’re not feeling real well, does anyone ever say to you ‘Sounds like someone has a case of the Mondays?’” – Peter

11. “I can’t believe what a bunch of nerds we are. We’re looking up money laundering in a dictionary.” – Peter

12. “No! Not again! Why does it say paper jam when there is no paper jam! I swear to God one of these days I’m just going to kick this piece of sh*t out of the window.” – Samir

14. “There was nothing wrong with it until I was about 12 years old and that no-talent *ss-clown became famous and started winning Grammys.” – Michael

15. “Hi, my name is Steve. I come from a rough area. I used to be addicted to crack, but now, I am off it and trying to stay clean. That is why I am selling magazine subscriptions.” – Steve

16. “I’m thinking about taking that new chick from Logistics. If things go right I might be showing her my O-face. You know: Oh. Oh.” – Drew

17. “I looked into it more deeply and I found that apparently what happened is that he was laid off five years ago and no one ever told him about it; but through some kind of glitch in the payroll department, he still gets a paycheck.” – Bob

Joanna: “Won’t you get fired?”

21. “Yeah, I just stare at my desk; but it looks like I’m working. I do that for probably another hour after lunch, too. I’d say in a given week I probably only do about 15 minutes of real, actual, work.” – Peter

22. “Not right now, Lumberg. I’m kinda busy. In fact, I’m gonna have to ask you to go ahead and—just come back another time. I got a meeting with the Bobs in a couple of minutes.” – Peter

24. “Before we go any further, all right, we have to swear to God, Allah, that nobody knows about this but us, all right? No family members, no girlfriends, nobody.” – Peter

25. “You know I never really liked paying bills, I don’t think I’m going to do that either.” – Peter

27. “I wanna take you out to dinner, and then I wanna go back to my apartment and watch Kung Fu. Do you ever watch Kung Fu?” – Peter

29. “Lawrence, can we just pretend like we can’t hear each other through the wall?” – Peter

34. “And yes, I won’t be leaving a tip, ’cause I could—I could shut this whole resort down. Sir? I’ll take my traveler’s checks to a competing resort. I could write a letter to your board of tourism and I could have this place condemned. I could put—I could put—strychnine in the guacamole. There was salt on the glass, ‘big’ grains of salt.” – Milton

42. “Well, when a boss wants you to work on Saturday he generally asks you at the end of the day, right? So, all you gotta do is avoid him—on the last few hours on Friday, duck out early, turn off your answering machine—you should be home free, man.” – Lawrence

Office Space Quotes From Other Characters

43. “We always like to avoid confrontation, whenever possible. Problem is solved from your end.” – Bob

45. “You know what I can’t figure out? How is it that all these stupid neanderthal mafia guys can be so good at crime, and smart guys like us can suck so badly at it.” – Michael

48. “I’d like to move us right to Peter Gibbons. We had a chance to meet this young man, and boy he’s just a straight shooter with upper management written all over him.” – Bob

49. “We’re not going to some white-collar resort prison. No, no, no! We’re going to federal pound me in the *ss prison!” – Michael

50. “How dare you judge me? Look at you. You’re just some penny-stealing—criminal—man.” – Joana

51. “Ah, ah, I almost forgot. I’m also going to need you to go ahead and come in on Sunday, too. We, uh, lost some people this week and we sorta need to play catch-up. Mmmmkay? Thaaaaaanks.” – Bill

52. “Yeah, but I’m not about to go in and start taking money from the register.” – Joanna

Did These Quotes Make You Question Some of Your Life Choices?

Indeed, having poor working conditions can significantly impact productivity. This fact can be seen in each line and scene of Office Space. No matter what job or industry you’re in, as long as you’re working, there’s no doubt that you can relate to this kind of situation.

Through Office Space, we understand how a toxic working environment diminishes employees’ motivation to work. After all, who would have the energy and drive to succeed if negative people and situations put you down at work?

You can’t waste your life on a job you hate. As Joanna cleverly and wisely put it, “Most people don’t like their jobs. But you go out there, and you find something that makes you happy.”

Happiness, your passion, and all other positive things aren’t handed to you on a platter. You find these things for yourself.

With that, we hope these quotes from Office Space were able to give you some realizations about work, life, and everything in between. Don’t settle for less, but don’t just sit there waiting for something better to come. Be proactive to achieve something better for yourself!

Which quotes were most relevant to you? Comment below!