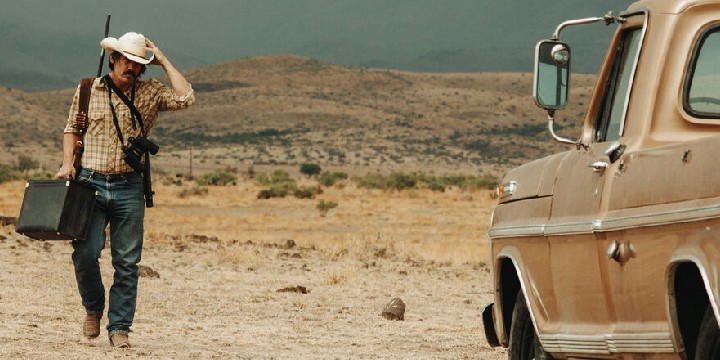 If you’re a fan of crime and thriller movies, you’ll definitely get hooked on our list of the best No Country for Old Men quotes!

In this movie, Llewelyn Moss finds himself in the aftermath of a drug deal and takes the cash left behind. Greed is what pushes Moss to a corner, and because of his actions, a ruthless killer then picks up his trail and hunts him down.

Moss encountered the killer, but he was able to escape. Unfortunately, even though he was lucky the first time, he is pursued by Mexican gangsters and is then murdered in the end.

Without a doubt, No Country for Old Men shows us that wrongdoings will just ruin our lives. No good will ever come out of an evil deed. So, we’ve compiled these quotes to highlight this message!

And make sure to read these Young Guns quotes and Tombstone quotes.

1. “This is the best deal you’re going to get. I won’t tell you that you can save yourself because you can’t.” – Anton Chigurh

4. Man Who Hires Wells: “Just how dangerous is he?”

Carson Wells: “Compared to what? The bubonic plague?”

Carla Jean Moss: “What do they say?”

6. “I always figured when I got older, God would sorta come into my life somehow. And He didn’t. I don’t blame Him. If I was Him, I would have the same opinion of me that He does.” – Sheriff Ed Tom Bell

Loretta Bell: “Don’t hurt no one.”

8. “What business is it of yours where I’m from—friendo?” – Anton Chigurh

Anton Chigurh: “That depends. Do you see me?”

Llewelyn Moss: “Well, then I’ll tell her myself.”

11. Anton Chigurh: “And you know what’s going to happen now. You should admit your situation. There would be more dignity in it.”

Carson Wells: “You go to hell.”

Anton Chigurh: “Alright. Let me ask you something. If the rule you followed brought you to this, of what use was the rule?”

Carson Wells: “Do you have any idea how crazy you are?”

Anton Chigurh: “You mean the nature of this conversation?”

Carson Wells: “I mean the nature of you.”

No Country for Old Men Quotes for Some Intense Scenes

Sheriff Ed Tom Bell: “If it isn’t, it’ll do until the mess gets here.”

Llewelyn Moss: “Well, I got a good feeling, so that should even out.”

15. Llewelyn Moss: “If I was cuttin’ deals, why wouldn’t I go deal with this guy Chigurh?”

Carson Wells: “No, no. No. You don’t understand. You can’t make a deal with him. Even if you gave him the money he’d still kill you. He’s a peculiar man. You could even say that he has principles. Principles that transcend money or drugs or anything like that. He’s not like you. He’s not even like me.”

Llewelyn Moss: “He don’t talk as much as you; I give him points for that.”

17. Carson Wells: “Buenos Dias. I’m guessing this isn’t the future you had planned for yourself when you first clapped eyes on that money. Don’t worry. I’m not the man who’s after you.”

Llewelyn Moss: “I know that. I’ve seen him.”

Carson Wells: “You’ve seen him, and you’re not dead?”

Llewelyn Moss: “What’s this guy supposed to be, the ultimate badass?”

Carson Wells: “No, I wouldn’t describe him as that.”

Llewelyn Moss: “How would you describe him?”

Carson Wells: “I guess I would say he doesn’t have a sense of humor.”

No Country for Old Men Quotes to Stir Your Mind

18. “All the time ya spend trying to get back what’s been took from ya, more is going out the door. After a while, you just have to try to get a tourniquet on it.” – Uncle Ellis

20. “The crime you see now, it’s hard to even take its measure. It’s not that I’m afraid of it. I always knew you had to be willin’ to die to even do this job. But I don’t want to push my chips forward and go out and meet somethin’ I don’t understand. A man would have to put his soul at hazard. He’d have to say: ‘Okay, I’ll be part of this world.’” – Sheriff Ed Tom Bell

22. Carla Jean Moss: “Sheriff, was that a true story about Charlie Walser?”

Sheriff Ed Tom Bell: “Who’s Charlie Walser? Oh! Well—huh—a true story? I couldn’t swear to every detail, but it’s certainly true that it is a story.”

23. Carla Jean Moss: “I ain’t got the money. What little I had is long gone, and there are bills plenty to pay yet. I buried my mother today. Can’t pay for that neither.”

Anton Chigurh: “I wouldn’t worry about it.”

Carla Jean Moss: “I need to sit down.”

24. Deputy Wendell: “You think this boy Moss has got any notion of the sorts of sons of bitches that’re huntin’ him?”

Sheriff Ed Tom Bell: “I don’t know, he ought to. He’s seen the same things I’ve seen, and it’s certainly made an impression on me.”

Llewelyn Moss: “Uh, oh, good. Good! I need everything else.”

Llewelyn Moss: “Lotta people come in here without any clothes on?”

Do You Have Somewhere to Hide?

As humans, it is in our nature to commit mistakes. But, that doesn’t necessarily mean that we are acquitted of the consequences that come with it.

In the movie, Moss decides to take the money even though he knows better. That’s when all the hiding and chasing began.

Even though Moss was lucky enough to get away from the killer, someone else was still able to find him and kill him in the end. This shows that no matter how hard we try to escape the repercussions of our actions, we will always receive them in one way or another.

The consequences of our actions will follow us till the day we die. So, to ensure we don’t regret anything in the end, we must be kindhearted, conscientious, and compassionate.

With that, we hope this list of No Country for Old Men quotes was able to wake up your morals and principles. Let us remember to weigh the pros and cons of our decisions and let our good-natured selves take it from there.