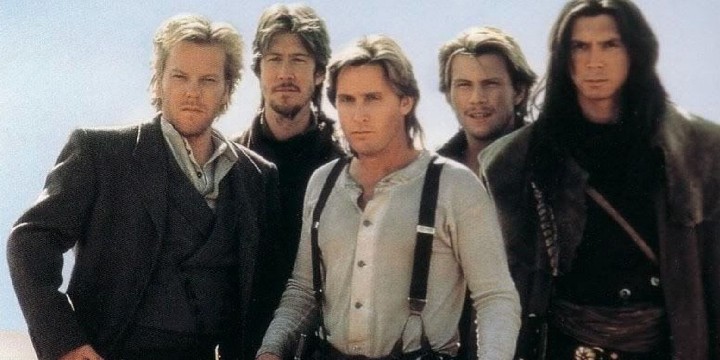 Here are our favorite Young Guns quotes that will show you whether or not retaliation or revenge is good for you.

In this movie, a cattle rancher named John Tunstall is murdered by his rival and his men. Not long after this, his employees, Billy the Kid, Doc Scurlock, José Chavez y Chavez, Richard Brewer, Dirty Steve, and Charlie Bowdre seek to avenge his death. Through their efforts, they were deputized and given warrants for the arrest of the murderers.

Sadly, Billy the Kid was unable to wait for justice. He started gunning down unarmed men and ended up killing one of their colleagues. Because of this, they were stripped of their badges.

Just through this plot preview, you can already see how Young Guns is a movie packed full of action with many quotes on seeking retribution. If this made you curious, check out our list below! We’ve collected the best Young Guns quotes that we’re sure you’ll love!

And don’t forget to check out these No Country for Old Men quotes and Tombstone quotes.

1. Charlie Bowdre: “Hey, Chavez, how come they ain’t killing us?”

Dirty Steve: “Because we’re in the spirit world, asshole. They can’t see us.”

José Chavez y Chavez: “Many nights, my friend—many nights I’ve put a blade to your throat while you were sleeping. Glad I never killed you, Steve. You’re all right.”

3. Lawrence Murphy: “Well. The belted earl has spoken. All I see are hired thieves.”

Lawrence Murphy: “Well, I’ve had you pegged as the type that likes—educatin’ young men.”

4. “You know, sir, I do admire you, and I sure would like to touch the gun that’s gonna kill Billy the Kid.” – Billy the Kid

Billy the Kid: “Alex, if you stay, they’re gonna kill you. And then I’m gonna have to go around and kill all the guys who killed you. That’s a lot of killing.”

6. “See, you get three or four good pals. Well, then, you’ve got yourself a tribe. And there ain’t nothing stronger than that.” – Billy the Kid

7. Dirty Steve: “There are people who will never secede—.”

8. José Chavez y Chavez: “I told you I would find the way, and the way is west.”

Billy the Kid: “West, huh? Well, west is that way, and the bastards we gotta kill are that way.”

Young Guns Quotes That Live in Our Heads Rent-Free

9. “Did you guys see the size of that chicken?” – Dirty Steve

Young Guns Quotes That Are Full of Wit

17. Dick Brewer: “Rumor has it you killed a man, Billy. You don’t seem like the killing sort.”

Dirty Steve: “Yeah, Billy. What’d you kill him for?”

Billy the Kid: “He was hacking on me.”

Buckshot Roberts: “I ain’t got no business with that warrant no more, peckerhead son of a bitch.”

19. Yen Sun: “I know what you’ve come to do. You’ve come to lay with me and cut me into tiny pieces. You’re the bandit that eats children and old people.”

20. “Did you know pigs are as smart as dogs? It’s true. I knew this guy in El Capitan who taught his pig to bark at strangers.” – Charlie Bowdre

21. “Dear Governor Axtell. I’ve heard that you will give 200 dollars for my head. Perhaps we should meet and talk. I am at the Juarez village at the border. Send three men, and instruct them not to shoot, as I am unarmed. In short, sir, I surrender. Your obedient servant, William H. Bonney. PS: I changed my mind. Kiss my ass.” – Billy the Kid

Charlie Bowdre: “He’s there enough to be dancing with a pretty girl while we’re sitting around pulling our tallywackers.”

More Young Guns Quotes to Keep You on Your Toes

23. “We work for Mr. Tunstall as regulators. We regulate any stealing off his property. We’re damn good too! Mr. Tunstall’s got a soft spot for runaways, derelicts, and vagrant types. But you can’t be any geek off the street, gotta be handy with the steel, if you know what I mean, earn your keep.” – Charlie Bowdre

24. “Hey, you ain’t no regulator, boy. You just stay here with the pork. They’re smarter than you anyway; you might learn something.” – Charlie Bowdre

25. “I’m not a pistoleer or a knife smith like that greaser Chavez Chavez over there. I’m a pugilist.” – Charlie Bowdre

How Does One Achieve Justice?

In the movie, Billy the Kid and the rest of the gang decided to seek justice to avenge the death of John Tunstall. However, though they were able to get revenge on Tunstall’s rival and murderers, their wrong decision led them to untoward consequences. In the end, they were also hunted down by local authorities because of their unlawful actions.

Just like our favorite characters experienced, justice can sometimes seem elusive. The less money and connections you have, the less opportunity you have to achieve it. This is why some people don’t trust the lawful process and instead take matters into their own hands.

But, remember that justice and the truth will always prevail. Know that as long as you fight for it through good and moral means, you will achieve it. Never let revenge take hold of your heart and push you to do bad things to others.

Learn from the mistakes that the characters from Young Guns experienced. Whenever you need some reminders of the lessons you’ve gained from the movie, feel free to check this collection again!