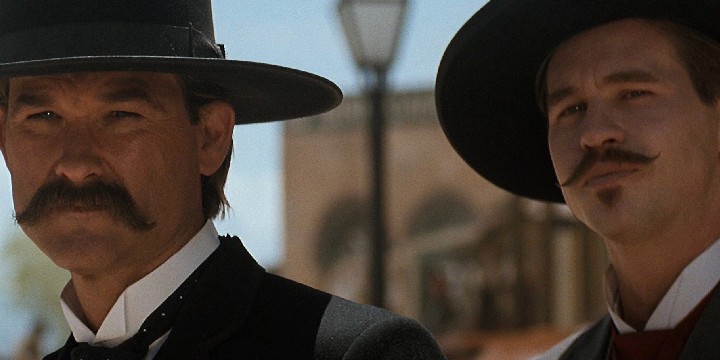 These Tombstone quotes will make you understand the futility of seeking revenge!

Tombstone is a Western drama movie directed by George Cosmatos and released in 1993. It is based on real-life events surrounding the gunfight at the O.K. Corral and the Earp Vendetta Ride. The movie stars Kurt Russell as Wyatt Earp, Val Kilmer as Doc Holliday, and Sam Elliott as Virgil Earp.

It all starts when Morgan Earp is murdered by three cowboys who work for a corrupt political boss named Johnny Ringo. Wyatt decides to take matters into his own hands by setting out with his two brothers, Virgil and Morgan, to hunt down the cowboys. Wyatt told Doc Holliday, his friend, that he was planning on hunting down Ringo, but Doc had another plan in mind.

However, while exacting revenge, Wyatt and Doc Holliday start to feel remorse for their actions. They noticed that all their revenge was pointless and meaningless.

Indeed, revenge is something that many of us have thought about at one time or another. But, remember that it won’t be a good solution to your pain and suffering. Read on to learn more about this topic and its relevance to the characters!

And don’t forget to check out these Urban Cowboy quotes and Django Unchained quotes.

Doc Holliday: “There’s no normal life, Wyatt. It’s just life. Get on with it.”

Doc Holliday: “Sure you do. Say goodbye to me. Go grab that spirited actress and make her your own. Take that beauty from it, don’t look back. Live every second. Live right on to the end. Live Wyatt. Live for me. Wyatt, if you were ever my friend—if ya ever had even the slightest of feelin’ for me, leave now. Leave now, please.”

2. Doc Holliday: “It appears my hypocrisy knows no bounds.”

3. Wyatt Earp: “What makes a man like Ringo, Doc? What makes him do the things he does?”

Doc Holliday: “A man like Ringo has got a great big hole, right in the middle of him. He can never kill enough, or steal enough, or inflict enough pain to ever fill it.”

Wyatt Earp: “What does he need?”

4. Wyatt Earp: “Go ahead, skin it! Skin that smokes wagon and sees what happens!”

Wyatt Earp: “I’m gettin’ tired of your gas. Now jerk that pistol and go to work! I said throw down, boy!”

5. “Look like somebody just walked over your grave.” – Doc Holliday

6. Jack Johnson: “Doc, you oughta be in bed. What the hell you doin’ this for anyway?”

Jack Johnson: “Hell, I got lots of friends.”

8. Wyatt Earp: “All right, Clanton. You called down the thunder. Well, now you’ve got it! You see that? It says United States Marshal!”

Wyatt Earp: “Take a good look at him, Ike, ’cause that’s how you’re gonna end up! The Cowboys are finished, you understand? I see a red sash; I kill the man wearin’ it! So run, you cur—run! Tell all the other curs the law’s comin’! You tell ’em I’m coming, and hell’s coming with me, you hear? Hell’s coming with me!

Doc Holliday: “I have two guns, one for each of ya.”

Doc Holliday: “You’re a daisy if you do!”

13. “I have nothing left, nothing to give you. I have no pride, no dignity, no money. I don’t even know how we’ll make a living, but I promise I’ll love you the rest of your life.” – Wyatt Earp

Johnny Ringo: “Smell that, Bill? Smells like someone died.”

17. “Look at all the stars. You look up, and you think, ‘God made all this, and He remembered to make a little speck like me.’ It’s kind of flattering, really.” – Morgan Earp

18. “Remember what I said about people seein’ a bright light before they die? It ain’t true. I can’t see a damn thing.” – Morgan Earp

Doc Holliday: “Damn it, you’re the most fallible, stubborn, self-deluded, bull-headed man I’ve ever known in my entire life.”

Doc Holliday: “You’re the only human being in my entire life that ever gave me hope.”

Short Tombstone Quotes to Give You Goosebumps

23. “I already got a guilty conscience. Might as well have the money too.” – Crawley Dake

24. “You gonna do somethin’ or just stand there and bleed?” – Wyatt Earp

25. “Nonsense, I have not yet begun to defile myself.” – Doc Holliday

More Tombstone Quotes for Those Who Love Western Movies

Johnny Ringo: “Yeah, you look it.”

Doc Holliday: “And you must be Ringo. Look, darling, Johnny Ringo. The deadliest pistoleer since wild bill, they say. What do you think, darling? Should I hate him?”

Doc Holliday: “Yes, but there’s just something about him. Something around the eyes, I don’t know, reminds me of—me. No. I’m sure of it. I hate him.”

Doc Holliday: “That is a hell of a thing for you to say to me.”

29. Doc Holliday: “I beg to differ, sir. We started a game we never got to finish. Play for blood, remember?”

Johnny Ringo: “Oh, that. I was just foolin’ about.”

30. Morgan Earp: “It said that a lot of people when they die, they see this light. Like in a tunnel. They say it’s the light leadin’ you to heaven.”

Wyatt Earp: Really? Well, what about hell? They got a sign there or what?”

Did These Tombstone Quotes Make You Understand That Revenge Won’t Solve Anything?

There’s no denying that we all feel vengeful when people do something to make us angry. To feel better about ourselves and vent our rage, we want to make them suffer more than we’ve felt. But, Tombstone makes us realize that getting revenge will give us nothing but harm.

One of the lessons that can be found in Tombstone is that revenge comes at a cost. This is shown in the movie when Wyatt and Doc Holliday kill cowboys at the O.K. Corral, then suffer remorse. Instead of feeling satisfied and at peace, they felt a pang of guilt.

This shows that vengeance doesn’t give us peace of mind and makes us feel better. We only make ourselves feel worse by refusing to forgive others. So, it is always better to forgive the other person who has done something wrong to us, even if they do it intentionally or unintentionally.

We hope these Tombstone quotes were able to help you realize that vengeance will always be futile. Remember that to forgive is to forge a peaceful and compassionate path in life!