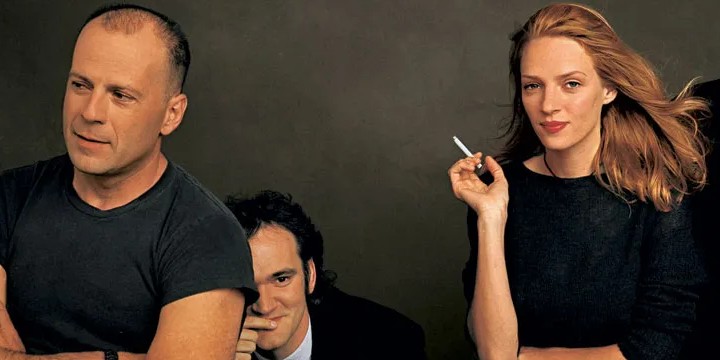 Check out these top 30 Pulp Fiction quotes that’ll undoubtedly make you reflect on your actions!

For those who don’t know, Pulp Fiction is among Quentin Tarantino’s most famous works to this date! There has also been immense praise for its writing, which puts topics like redemption, pride, and more into the spotlight.

In the movie, the complicated lives of hitmen and their families get intertwined. Yes, it’s a crime thriller packed with violent scenes. But, beyond them lie meaningful lessons we can apply in our day-to-day lives.

Take Vincent Vega’s personality as an example. He takes everything as it is; this is the same as the saying we have in real life, which is, “It is what it is.” There are many things in this world we can’t control, so we just have to go with the flow so we can live contentedly.

To learn more about him and the rest of the characters from Pulp Fiction, read our collection below. We’re positive that whether or not you’re a fan, you’ll love this list of the movie’s timeless quotes!

And don’t forget to check out these Grease quotes and Scarface quotes.

1. “The night of the fight, you may feel a slight sting. That’s pride f*cking with you. F*ck pride. Pride only hurts; it never helps.” – Marsellus Wallace

2. “If my answers frighten you, then you should cease asking scary questions.” – Jules Winnfield

3. “You play with matches, you get burned.” – Vincent Vega

Mia Wallace: “Uncomfortable silences. Why do we feel it’s necessary to yak about bullshit in order to be comfortable?”

Mia Wallace: “That’s when you know you’ve found somebody special. When you can just shut the f*ck up for a minute and comfortably enjoy the silence.”

Raquel: “I have character.”

Winston Wolfe: “Just because you are a character doesn’t mean that you have character.”

6. “Trying to forget anything as intriguing as this would be an exercise in futility.” – Mia Wallace

7. “I do believe Marsellus Wallace, my husband, your boss, told you to take me out and do whatever I wanted. Now I wanna dance, I wanna win. I want that trophy, so dance good.” – Mia Wallace

10. “Whether or not what we experienced was an ‘According to Hoyle’ miracle is insignificant. What is significant is that I felt the touch of God. God got involved.” – Jules Winnfield

11. Jules Winnfield: “I’m not giving you that money. I’m buying something from you. Wanna know what I’m buyin’ Ringo?”

Jules Winnfield: “Your life. I’m givin’ you that money, so I don’t have to kill your *ss. You read the Bible?”

Jules Winnfield: “There’s a passage I got memorized. Ezekiel 25:17. ‘The path of the righteous man is beset on all sides by the inequities of the selfish and the tyranny of evil men. Blessed is he who, in the name of charity and goodwill, shepherds the weak through the valley of the darkness, for he is truly his brother’s keeper and the finder of lost children. And I will strike down upon thee with great vengeance and furious anger those who attempt to poison and destroy My brothers. And you will know I am the Lord when I lay My vengeance upon you.’ Now, I been sayin’ that sh*t for years. And if you ever heard it, that meant your *ss. You’d be dead right now. I never gave much thought to what it meant. I just thought it was a cold-blooded thing to say to a motherf*cker before I popped a cap in his *ss. But I saw some sh*t this mornin’ made me think twice. See, now I’m thinking: maybe it means you’re the evil man. And I’m the righteous man. And Mr. 9mm here, he’s the shepherd protecting my righteous *ss in the valley of darkness. Or it could mean you’re the righteous man and I’m the shepherd, and it’s the world that’s evil and selfish. And I’d like that. But that sh*t ain’t the truth. The truth is you’re the weak. And I’m the tyranny of evil men. But I’m tryin’, Ringo. I’m tryin’ real hard to be the shepherd.”

12. “You wanna play blind man? Go walk with the shepherd. Me? My eyes are wide open.” – Jules Winnfield

Jules Winnfield: “What country you from?”

Jules Winnfield: “‘What’ ain’t no country I ever heard of, do they speak English in ‘What?’”

Jules Winnfield: “English, motherf*cker, do you speak it?”

Jules Winnfield: “Then you know what I’m sayin’!”

Winston Wolfe: “Well, let’s not start sucking each other’s dicks quite yet.”

15. “Normally, both your *sses would be dead as f*cking fried chicken, but you happen to pull this sh*t while I’m in a transitional period so I don’t wanna kill you; I wanna help you. But I can’t give you this case, it don’t belong to me. Besides, I’ve already been through too much sh*t this morning over this case to hand it over to your dumb *ss.” – Jules Winnfield

16. Vincent Vega: “Have you ever given a foot massage?”

Jules Winnfield: “Sh*t yeah. I got my technique down and everything. I don’t be ticklin’ or nothin’.”

Vincent Vega: “Would you give a guy a foot massage?”

Vincent Vega: “You give them a lot?”

Vincent Vega: “You know, I’m getting kinda tired. I could use a foot massage myself.”

Jules Winnfield: “Man, you best back off; I’m gittin’ a little pissed here.”

17. Vincent Vega: “You know what the funniest thing about Europe is?”

Vincent Vega: “Alright, well you can walk into a movie theater in Amsterdam and buy a beer. And I don’t mean just like in no paper cup; I’m talking about a glass of beer. And in Paris, you can buy a beer at McDonald’s. And you know what they call a, uh, a Quarter Pounder with Cheese in Paris?”

Jules Winnfield: “They don’t call it a Quarter Pounder with Cheese?”

Vincent Vega: “Nah, man, they got the metric system; they wouldn’t know what the f*ck a Quarter Pounder is.”

Jules Winnfield: “What do they call it?”

Vincent Vega: “They call it a Royale with Cheese.”

Jules Winnfield: “What do they call a Big Mac?”

Vincent Vega: “A Big Mac’s a Big Mac, but they call it Le Big Mac.”

Jules Winnfield: “Le Big Mac. What do they call a Whopper?”

Vincent Vega: “I dunno, I didn’t go into Burger King. But, you know what they put on french fries in Holland instead of ketchup?”

Pulp Fiction Quotes to Add to Your Must-Reads

18. “You see, this profession is filled to the brim with unrealistic motherf*ckers. Motherf*ckers who thought their *sses would age like wine. If you mean it turns to vinegar, it does. If you mean it gets better with age, it don’t.” – Mia Wallace

19. Lance: “You’re going to give her an injection of adrenaline directly to her heart. But she’s got, uh, breastplate. So you gotta pierce through that. So what you have to do is, you have to bring the needle down in a stabbing motion.”

Lance: “No, you don’t gotta f*cking stab her three times! You gotta stab her once, but it’s gotta be hard enough to break through her breastplate into her heart, and then once you do that, you press down on the plunger.”

Vincent Vega: “What happens after that?”

Lance: “I’m kinda curious about that myself.”

20. Fabienne: “Whose motorcycle is this?”

Fabienne: “Whose chopper is this?”

Yolanda: “You just know, you touch him, you die.”

22. Vincent Vega: “Jules, did you ever hear the philosophy that once a man admits that he’s wrong that he is immediately forgiven for all wrongdoings? Have you ever heard that?”

Jules Winnfield: “Get the f*ck out of my face with that sh*t! The motherf*cker that said that sh*t never had to pick up itty-bitty pieces of skull on account of your dumb *ss.”

Jules Winnfield: “Well, I’m a mushroom-cloud-layin’ motherf*cker, motherf*cker! Every time my fingers touch my brain, I’m Superfly T.N.T. I’m the Guns of the Navarone! In fact, what the f*ck am I doin’ in the back? You’re the motherf*cker who should be on brain detail! We’re f*ckin’ switchin’! I’m washin’ the windows, and you’re pickin’ up this nigga’s skull!”

23. Winston Wolfe: “You must be Jules, which would make you Vincent. Let’s get down to brass tacks, gentlemen. If I was informed correctly, the clock is ticking. Is that right, Jimmie?”

Winston Wolfe: “I was led to believe that if she comes home and finds us here, she wouldn’t appreciate it none too much?”

Jimmie Dimmick: “She wouldn’t at that.”

Winston Wolfe: “That gives us exactly 40 minutes to get the f*ck out of Dodge. Which, if you do what I say when I say it, should be plenty. Now, you’ve got a corpse in a car, minus a head, in a garage. Take me to it.”

More Pulp Fiction Quotes for Everyone Who Grew up Watching It

Jules Winnfield: “Why the f*ck did you do that?”

26. “The way your dad looked at it, this watch was your birthright. He’d be damned if any slopes gonna put their greasy yellow hands on his boy’s birthright, so he hid it, in the one place he knew he could hide something: his *ss. Five long years, he wore this watch up his *ss. Then when he died of dysentery, he gave me the watch. I hid this uncomfortable piece of metal up my *ss for two years. Then, after seven years, I was sent home to my family. And now, little man, I give the watch to you.” – Captain Koons

Vincent Vega: “Yeah, I think so. That means God came down from Heaven and stopped the bullets.”

Jules Winnfield: “Yeah, man, that’s what it means. That’s exactly what it means! God came down from Heaven and stopped the bullets.”

Vincent Vega: “I think we should be going now.”

Vincent Vega: “Chill the f*ck out, Jules, this sh*t happens.”

Vincent Vega: “Are you Jewish?”

Vincent Vega: “Why not?”

30. Jules Winnfield: “I hate to shatter your ego, but this is not the first time I’ve had a gun pointed at me.”

Ringo: “You don’t take your f*cking hand off that case, it’ll be your last.”

Who Are Your Favorite Characters From Pulp Fiction and What Did They Teach You?

Pulp Fiction is a complex movie with lots of twists and turns. However, because of that nature, you’re also sure there’s something you can learn from each of its characters. Aside from accepting things as they are, it also focuses on redemption.

If you’ve watched Pulp Fiction, you’ll notice how each of the characters was given a chance to redeem themselves. They were considered outlaws. But even so, in the end, they were still given a choice: would they choose the straight and moral path or continue on the path they’re in now?

It’s the same with us. As humans, it’s normal to make mistakes and do bad things. But, at the end of the day, we always have the chance to correct what we did wrong. We can apologize, or even take steps to actively correct our wrongdoings.

Sadly, some get consumed by pride. We get so self-righteous that we can’t accept what we did wrong. This is the main reason behind our struggles to improve as humans and build better relationships with others.

With that, we hope these Pulp Fiction quotes were able to help you let go of your pride so you can start your journey toward a better you. Remember, whenever you make mistakes, take the chance to redeem yourself. Don’t ever waste a second chance given to you!