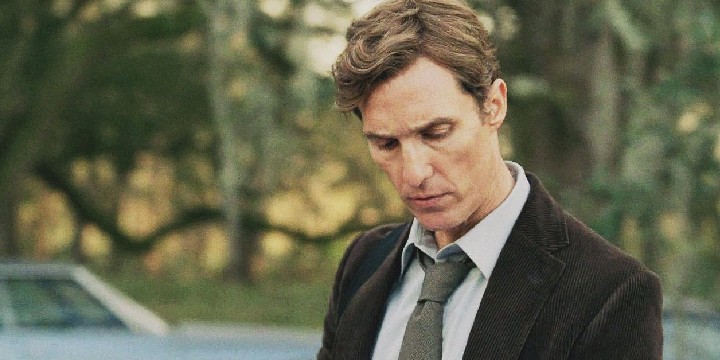 Your life will definitely change in a positive way by reading these Rust Cohle quotes on existence, morality, and love.

Rust Cohle is one of the main characters in the True Detective series. He is an intelligent and committed homicide detective who, from time to time, blurts out his cynical, deep, and philosophical thoughts about life.

Despite looking like an unlikeable character on the surface, many fans know how kind he is even with his dark past. Later in the series, people also learn that Rust’s cynical and gloomy outlook results from his suffering from grief and pain. But, even with all his negativity, his words still hold truth and meaning about the world.

So, if you are interested in his character and life-changing quotes, then add this to your must-read list now. Check out our complete collection below to learn more about Rust Cohle.

And make sure to read these True Detective quotes and Breaking Bad quotes.

1. “When you can’t remember your lives, you can’t change your lives, and that is the terrible and the secret fate of all life. You’re trapped by that nightmare you keep waking up into.”

3. “Given how long it’s taken for me to reconcile my nature, I can’t figure I’d forgo it on your account, Marty.”

4. “The world needs bad men. We keep the other bad men from the door.”

5. “In eternity, where there is no time, nothing can grow. Nothing can become. Nothing changes. So death created time to grow the things that it would kill, and you are reborn but into the same life that you’ve always been born into.”

7. “If the only thing keeping a person decent is the expectation of divine reward, then brother, that person is a piece of sh*t. And I’d like to get as many of them out in the open as possible. You gotta get together and tell yourself stories that violate every law of the universe just to get through the g*dd*mn day? What’s that say about your reality?”

8. “If the common good has got to make up fairy tales, then it’s not good for anybody.”

9. “You know, people that give me advice, I reckon they’re talking to themselves.”

10. “Life’s barely long enough to get good at one thing. So be careful what you get good at.”

Rust Cohle Quotes That’ll Leave a Lasting Impact on You

11. “People incapable of guilt usually do have a good time.”

14. “And you could just let go, finally know that you didn’t have to hold on so tight.”

15. “I sure hope that old lady was wrong about death not being the end of it.”

16. “You see, we all got what I call a life trap—a gene deep certainty that things will be different, that you’ll move to another city and meet the people that’ll be the friends for the rest of your life, that you’ll fall in love and be fulfilled, f*cking fulfillment and closure, whatever the f*ck those two f*ckin’ empty jars to hold this sh*t storm, and nothing is ever fulfilled until the very end, and closure. No, no, no. Nothing is ever over.”

18. “There is no such thing as forgiveness. People just have short memories.”

19. “People, I have seen the finale of thousands of lives, man. Young, old, each one so sure of their realness. You know that their sensory experience constituted a unique individual with purpose and meaning. So certain that they were more than biological puppets. The truth wills out, and everybody sees. Once the strings are cut, all fall down.”

20. “I think human consciousness is a tragic misstep in evolution. We became too self-aware. Nature created an aspect of nature separate from itself. We are creatures that should not exist by natural law. We are things that labor under the illusion of having a self. This accretion of sensory experience and feeling programmed with total assurance that we’re each somebody. When, in fact, everybody’s nobody. Maybe the honorable thing for our species to do is deny our programming, stop reproducing, walk hand in hand into extinction, one last midnight, brothers and sisters opting out of a raw deal.”

22. “The ontological fallacy of expecting a light at the end of the tunnel, well, that’s what the preacher sells, same as a shrink. See, the preacher, he encourages your capacity for illusion. Then he tells you it’s a f*cking virtue. Always a buck to be had doing that, and it’s such a desperate sense of entitlement, isn’t it?”

23. “It’s like, in this universe, we process time linearly forward. But outside of our spacetime, from what would be a fourth-dimensional perspective, time wouldn’t exist, and from that vantage, could we attain it. We’d see our spacetime would look flattened, like a single sculpture with matter in a superposition of every place it ever occupied. Our sentience just cycling through our lives like carts on a track. See, everything outside our dimension that’s eternity, eternity looking down on us. Now, to us, it’s a sphere, but to them, it’s a circle.”

24. “I see a propensity for obesity, poverty, a yearn for fairy tales. Folks puttin’ what few bucks they do have into a little wicker basket being passed around. I think it’s safe to say nobody here’s gonna be splitting the atom, Marty.”

25. “I think about my daughter now and what she was spared. Sometimes, I feel grateful. The doctor said she didn’t feel a thing, went straight into coma. Then, somewhere in that blackness, she slipped off into another deeper kind. Isn’t that a beautiful way to go out? Painlessly as a happy child? Trouble with dying later is you’ve already grown up. The damage is done. It’s too late.”

26. “I don’t think that man can love, at least not the way that he means. Inadequacies of reality always set in.”

27. “Kids are the only thing that matter. They’re the only reason for this whole man-woman drama.”

29. “Look, as sentient meat, however illusory our identities are, we craft those identities by making value judgments. Everybody judges all the time. Now, you got a problem with that, you’re living wrong.”

30. “This place is like somebody’s memory of a town, and the memory is fading. It’s like there was never anything here but jungle.”

31. “People out here, it’s like they don’t even know the outside world exists. Might as well be living on the f*cking moon.”

32. “It’s Thursday, and it’s past noon. Thursday is one of my days off. On my days off, I start drinking at noon. You don’t get to interrupt that.”

33. “Sometimes, I think I’m just not good for people. That it’s not good for them to be around me, I wear them down, they get unhappy.”

34. “I contemplate the moment in the garden, the idea of allowing your own crucifixion.”

35. “Certain linguistic anthropologists think that religion is a language virus that rewrites pathways in the brain, dulls critical thinking.”

36. “Back then, the visions, most of the time, I was convinced that I’d lost it. But there were other times I thought I was main-lining the secret truth of the universe.”

37. “I’d consider myself a realist, all right? But in philosophical terms, I’m what’s called a pessimist.”

38. “Of course, I’m dangerous. I’m police. I can do terrible things to people with impunity.”

39. “My life’s been a circle of violence and degradation long as I can remember. I’m ready to tie it off.”

40. “The newspapers are going to be tough on you. And prison is very, very hard on people who hurt kids. If you get the opportunity, you should kill yourself.”

What Do You Think of Rust Cohle’s Life Philosophy?

True Detective fans recognize the wisdom that Rust drops in his every monologue. But, what really teaches us about life is how he picked himself up together and hoped for better things to come.

Like Rust Cohle, every one of us has gone through some bad experiences. We know the feeling of grief, despair, and loneliness. But, we should realize that hope and love can still serve as our light and guiding force even in our darkest days.

Rust Cohle’s story only proves that each one of us can crawl out of the cave and experience happiness for ourselves. If we keep being scared, we will never grow and discover the world outside us. We will never meet the people who will change us and help us improve ourselves and our life.

Indeed, Rust Cohle is an inspiration to be brave in fighting evil on the outside and battling the demons within. Let these quotes serve as your motivation to find the path toward joy and peace!

Which Rust Cohle quote is your favorite? Do you have more to add to the collection? Let us know what you think in the comments section below.