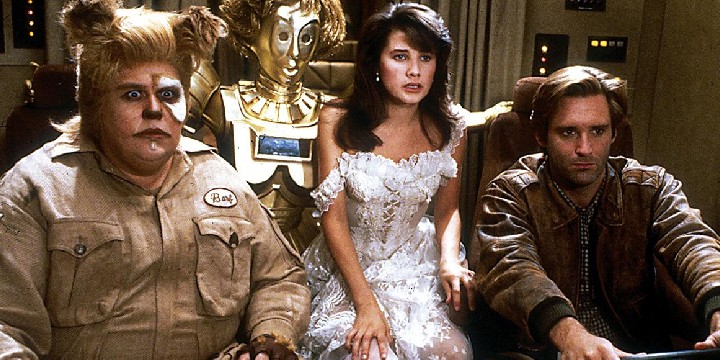 Enjoy and read these Spaceballs quotes, full of funny and goofy lines that will keep you entertained!

Mel Brooks co-wrote, produced, and directed the 1987 American space opera parody film Spaceballs. It is a spoof of the well-known and adored Star Wars franchise.

Mel Brooks combined the silliest elements of all the major space adventures in a way that will satisfy you! With that, here are the best Spaceballs quotes that stood the test of time.

And make sure to read these Young Frankenstein quotes and Blazing Saddles quotes.

2. “Now you see that evil will always triumph because good is dumb.” – Lord Dark Helmet

3. “Out of order? Even in the future, nothing works!” – Lord Dark Helmet

5. “So, the combination is one, two, three, four, five? That’s the stupidest combination I ever heard in my life! That’s the kinda thing an idiot would have on his luggage.” – Lord Dark Helmet

6. “No sir, I didn’t see you playing with your dolls again!” – Colonel Sandurz

8. “There’s only one man who would dare give me the raspberry—Lone Starr!” – Lord Dark Helmet

9. “Excuse me. I’m trying to conduct a wedding here which has nothing to do with love. Please, be quiet!” – Druidian Priest

10. “Yes. I always have my coffee when I watch radar, you know that!” – Lord Dark Helmet

12. “Listen, we’re not just doing this for money. We’re doing it for a shit load of money!” – Lone Starr

Hilarious Spaceballs Quotes to Make You Stand Up and Laugh

17. “I hate it when my Shwartz gets twisted!” – Lord Dark Helmet

18. “You idiots! These are not them! You’ve captured their stunt doubles!” – Captain of the Guard

19. “Get out of my escape pod you bearded bitch!” – Lord Dark Helmet

22. “It’s either the fourth of July or someone’s trying to kill us!” – Dot Matrix

25. “That was my virgin alarm. It’s programmed to go off before you do!” – Dot Matrix

27. “Absolutely nothing! Which is what you are about to become.” – Lord Dark Helmet

29. “Say goodbye to your two best friends, and I don’t mean your pals in the Winnebago.” – Lord Dark Helmet

30. “Well, you opened your fortune cookie, so here’s your fortune. Lone Starr, you know that medallion that you wear around your neck, but you don’t know what it means? Well, here’s what it means. It’s a royal birth certificate. Yes! Your father was a king. Your mother was a queen. Which makes you a certified prince.” – Yogurt

33. “Once we kidnap the princess, we will force her father, King Roland, to give us the combination to the air shield, thereby destroying Planet Druidia and saving Planet Spaceball.” – Colonel Sandurz

34. “Great. Now, we can take every last breath of fresh air from Planet Druidia. What’s the combination?” – President Skroob

35. “This ship will self-destruct in 20 seconds. This is your last chance to push the cancellation button.” – Self-Destruct Voice

38. “I’m having trouble with the radar, sir.” – Radar Technician

45. “The Ring! I can’t believe you fell for the oldest trick in the book! What a goof! What’s with you, man? Come on! You know what? Here, let me give it back to you.” – Lord Dark Helmet

47. “Did I miss something? When did we get to Disneyland?” – Lone Starr

48. “It’s my industrial-strength hair-dryer, and I can’t live without it!” – Princess Vespa

49. “You have the ring, and I see your Schwartz is as big as mine. Now, let’s see how well you handle it.” – Lord Dark Helmet

51. “What the hell am I looking at? When does this happen in the movie?” – Lord Dark Helmet

52. “So Princess Vespa, you thought you could outwit the imperious forces of Planet Spaceball. Well, you were wrong. You are now our prisoner and you will be held captive until such time as all the air is transferred from your planet—to ours.” – Lord Dark Helmet

Spaceballs Quotes That Bring You Into Their Intense World

59. “Before you die there is something you should know about us, Lone Starr.” – Lord Dark Helmet

60. “One pod left and three of us, and I’m the president. Well, boys, it’s a very lovely ship, I think you should go down with it. Goodbye. What the hell’s the matter with this seat belt? Ahhh!” – President Skroob

63. “So, Lone Starr. Yogurt has taught you well. If there’s one thing I despise, it is a fair fight. But if I must, then I must. May the best man win. Put ‘er there.” – Lord Dark Helmet

Spaceballs Quotes and Conversations That Will Make You Feel Nostalgic

76. “I told you never to call me on this wall! This is an unlisted wall!” – President Skroob

79. “Dearly beloved, we are gathered here today to witness Princess Vespa, daughter of King Roland going right past the altar, heading down the ramp and out the door!” – Minister

80. “Sandurz, Sandurz. You got to help me. I don’t know what to do. I can’t make decisions. I’m a president!” – President Skroob

82. “Not really. I was found on the doorstep of a monastery.” – Lone Starr

83. “Fasten all seatbelts, seal all entrances and exits, close all shops in the mall, cancel the three-ring circus, secure all animals in the zoo!” – Colonel Sandurz

Spaceball Quotes to Immerse You in Their Adventure

90. “That is his name, sir. Asshole, major asshole!” – Colonel Sandurz

91. “No you fool, we’re following orders. We were told to comb the desert so we’re combing it.” – Lord Dark Helmet

92. “Of course, you do. Druish princesses are often attracted to money and power, and I have both, and you know it!” – Lord Dark Helmet

95. “The kids love this one. And last but not least, Spaceballs the doll, me.” – Yogurt

96. “That’s much too early. Prepare to fast-forward!” – Colonel Sandurz

99. “Can we talk? Okay, we all know Prince Valium is a pill. But you could have married him for your father’s sake and had a headache for the next 25 years.” – Dot Matrix

101. “Please bring her back safely! And if it’s at all possible, try to save the car.” – King Roland

Spaceballs Quotes That Will Tell You More About the Movie

104. “On a sadder note, Pizza the Hutt was found dead earlier today in the back seat of his stretch limo. Evidently, the notorious gangster became locked in his car and ate himself to death. Coming up, Pongo’s review of Rocky 5,000!” – Newsman

106. “What’s the matter with this thing? What’s all this churning and bubbling? You call that a radar screen?” – Lord Dark Helmet

108. “I am the keeper of a greater power, a power known throughout the universe as the—no, the Schwartz!” – Yogurt

111. “Yes! Instant cassettes. They’re out in stores before the movie is finished!” – Colonel Sandurz

113. “Prepare for Metamorphosis, are you ready Kafka?” – Lord Dark Helmet

115. “How can there be a cassette of Spaceballs the movie? We’re still in the middle of making it!” – Lord Dark Helmet

116. “We are here to join these two together in holy—moly!!” – Druidian Priest

121. “Because we’re in the middle of a desert and we’re not going to get very far once that blazing sun gets overhead.” – Lone Starr

Was Spaceballs Part of Your Childhood Too?

The plot revolves around a pilot and his sidekick who want to save a princess from the evil Spaceballs group. Lord Dark Helmet takes on the role of Darth Vader from Star Wars.

The comedy sci-fi movie attracted viewers due to its close portrayal of Star Wars itself. More than 30 years after its theatrical release, Spaceballs continues to make people laugh.

This spoof film taught us how to deal with problems and seize opportunities. Regardless of being a parody, fans are anticipating and wishing for a sequel.

So, did you like our collection? Which quotes are your favorites? Join the discussion below.