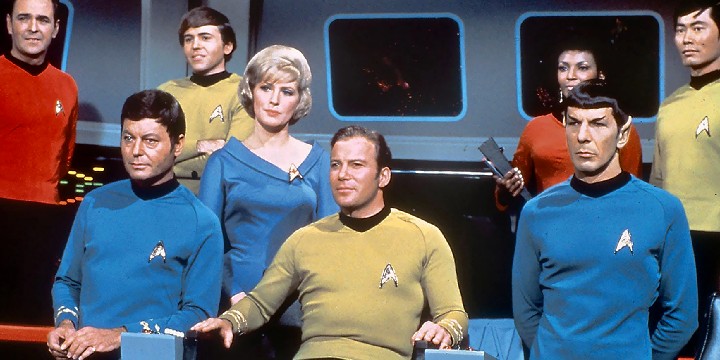 Let these Star Trek quotes show you how friendship, logic, and fun are no different, no matter where you are!

Star Trek is a sci-fi series created by Gene Roddenberry in the 1970s. It became a pop culture phenomenon that expanded through different forms of media. It currently has countless movie adaptations and sequels that fans keep watching repeatedly.

Like the Vulcans, humans can also reach their full potential by training the mind to reason. This method is one of the universe’s secrets that Star Trek has vowed to teach its viewers.

As the series ventures into conflict and wars, it teaches us that the heart and mind are essential in achieving growth. No doubt, there are countless lessons to be learned from this cult favorite. So, hop on the ride and explore the fantastic world of Star Trek!

And make sure to read these Spock quotes and Captain Kirk quotes.

1. “To all mankind: May we never find space so vast, planets so cold, heart and mind so empty, that we cannot fill them with love and warmth.” – Garth of Izar

3. “We prefer to help ourselves. We make mistakes, but we’re human—and maybe that’s the word that best explains us.” – James T. Kirk

5. “You know the greatest danger facing us is ourselves and irrational fear of the unknown. There is no such thing as the unknown. Only things temporarily hidden, temporarily not understood.” – James T. Kirk

6. “Change is the essential process of all existence.” – Spock

7. “If we’re going to be damned, let’s be damned for what we really are.” – Jean-Luc Picard

8. “I have been told that patience is sometimes a more effective weapon than the sword.” – Worf

10. “Leave bigotry in your quarters; there’s no room for it on the bridge.” – James T. Kirk

11. “A species that enslave other beings is hardly superior, mentally or otherwise.” – James T. Kirk

12. “With the first link, the chain is forged. The first speech censored, the first thought forbidden, the first freedom denied, chains us all irrevocably.” – Jean-Luc Picard

13. “The prejudices people feel about each other disappear when they get to know each other.” – James T. Kirk

14. “One man cannot summon the future. But one man can change the present!” – Spock

15. “The only person you’re truly competing against is yourself.” – Jean-Luc Picard

16. “There is a way out of every box, a solution to every puzzle; it’s just a matter of finding it.” – Jean-Luc Picard

17. “Our species can only survive if we have obstacles to overcome. You remove those obstacles. Without them to strengthen us, we will weaken and die.” – James T. Kirk

19. “What makes one man an exceptional leader? We see indications that it’s his negative side that makes him strong, that his evil side, controlled and disciplined, is vital to his strength. Your negative side is removed from you, the power of command begins to elude you.” – Spock

20. “I realize that command does have its fascination, even under circumstances such as these, but I neither enjoy the idea of command nor am I frightened of it. It simply exists, and I will do whatever logically needs to be done.” – Spock

21. “When governments murder those who speak the truth, it is time to get new governments.” – Diane Duane

Star Trek Quotes to Help You Live In the Now

23. “Now, I don’t pretend to tell you how to find happiness and love when everyday’s a struggle to survive. But I do insist that you do survive because the days and the years ahead are worth living for!” – Edith Keeler

Star Trek Quotes for Some Guidance in Life

26. “It is possible to commit no errors and still lose. That is not a weakness. That is life.” – Jean-Luc Picard

27. “Your will to survive, your love of life, your passion to know—everything that is truest and best in all species of beings has been revealed to you. Those are the qualities that make a civilization worthy to survive.” – Vian

28. “A man either lives life as it happens to him, meets it head-on and licks it, or he turns his back on it and starts to wither away.” – Dr. Phillip Boyce

29. “When honor dies—when trust is a useless thing—what use is life?” – Spock

32. “Confidence is faith in oneself. It can’t easily be given by another.” – Deanna Troi

33. “Insults are effective only where emotion is present.” – Spock

34. “A library serves no purpose unless someone is using it.” – Atoz

35. “You can use logic to justify almost anything. That’s its power. And its flaw.” – Kathryn Janeway

36. “Flair is what marks the difference between artistry and mere competence.” – William T. Riker

38. “I see no logic in wanting to worship a deity who demands you live in perpetual fear.” – Spock

Star Trek Quotes That Zoom in on Humanity

40. “Humans do have an amazing capacity for believing what they choose—and excluding that which is painful.” – Spock

41. “To be human is to be complex. You can’t avoid a little ugliness from within and from without.” – James T. Kirk

42. “When the personality of a human is involved, exact predictions are hazardous.” – Leonard McCoy

43. “Curious, how often you humans manage to obtain that which you do not want.” – Spock

44. “That may be the most important thing to understand about humans. It is the unknown that defines our existence. We are constantly searching, not just for answers to our questions, but for new questions. We are explorers. We explore our lives day by day, and we explore the galaxy, trying to expand the boundaries of our knowledge. And that is why I am here. Not to conquer you with weapons or with ideas. But to coexist and learn.” – Benjamin Sisko

Profound Star Trek Quotes to Unravel the Nature of Man

45. “Perhaps man wasn’t meant for paradise. Maybe he was meant to claw, to scratch all the way.” – James T. Kirk

47. “In critical moments, men sometimes see exactly what they wish to see.” – Spock

Star Trek Quotes That Will Change the Way You Perceive Freedom

48. “Without freedom of choice, there is no creativity.” – James T. Kirk

50. “Human beings do not survive on bread alone but on the nourishments of liberty. For what indeed is a man without freedom—naught but a mechanism, trapped in the cogwheels of eternity.” – Harry Mudd

Star Trek Quotes That Explore the Idea of God

51. “Sharing an orbit with God is no small experience.” – Deanna Troi

52. “What Hamlet said with irony I say with conviction: ‘What a piece of work is man! How noble in reason, how infinite in faculties, in form and moving how express and admirable, in action how like an angel, in apprehension how like a god!'” – Jean-Luc Picard

Star Trek Quotes to Show You How Evil Works

55. “Evil does seem to maintain power by suppressing the truth.” – Spock

59. “This is why one must be careful with life. Death is the most hateful thing. Don’t allow the destruction of what you can never restore.” – Diane Duane

61. “I haven’t faced death. I’ve cheated death. I’ve tricked my way out of death and patted myself on the back for my ingenuity; I know nothing.” – James T. Kirk

62. “Sir, you have a many-legged beast crawling up your shoulder.” – Spock

63. “Could you please continue the petty bickering? I find it most intriguing.” – Data

65. “I have never understood the female capacity to avoid a direct answer to any question.” – Spock

More Star Trek Quotes to Emphasize the Importance of Technology

67. “Computers make excellent and efficient servants, but I have no wish to serve under them.” – Spock

69. “I speak of rights! A machine has none; a man must. If you do not grant him that right, you have brought us down to the level of the machine; indeed, you have elevated that machine above us!” – Samuel T. Cogley

70. “Improve a mechanical device, and you may double productivity. But improve man, you gain a thousandfold.” – Khan Noonien Singh

Did These Quotes Open Your Eyes to the World?

Venturing out into the unknown is not an easy feat. But, it is through this curiosity that we can grow and develop as individuals.

This is one of the main lessons that Star Trek wants to impart to its viewers. Life is not limited to what you can see, hear, and touch. Most of the time, there are countless amazing things that we are yet to experience.

As they went on their voyage, they learned many things about the world, their teammates, and themselves. In the same way, if we explore beyond our comfort zones, we’ll be able to open our eyes to the different realities that people go through every day.

These realities will then lead us to make choices that can impact ourselves and the world. It’s difficult, but thanks to Star Trek, we’re made aware that every decision should be made with logic and emotion. Listen to both your heart and your mind, find a balance, and we’re sure you’ll make the best choice possible.

No doubt, Star Trek is a show that entertains and shares pearls of wisdom we can never get from the usual shows. So, we hope that you were able to learn a thing or two through this collection. Feel free to reread the list and find more new lessons relevant to you!

Are you a fan of Star Trek? Are there any other quotes you’d like us to add? Comment below.