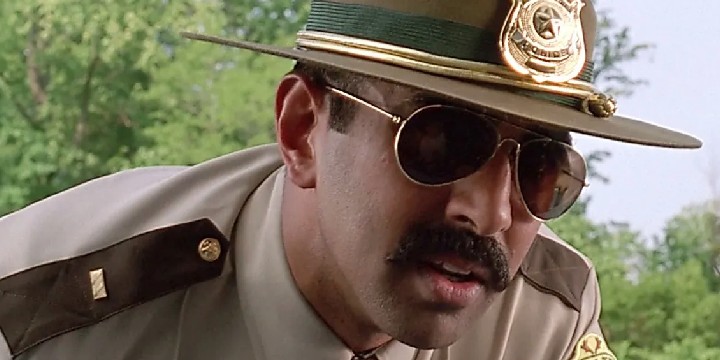 If you want your fair share of good laughs, read these Super Troopers quotes we’ve compiled!

It’s a given fact that real-life cops don’t actually act the same way as those in the movie. Once you’ve gotten over that, then you’d see the remarkable and unforgettable humor that the movie has.

It’s certainly a breath of fresh air to see people of authority act like fools. So, if you want to liven up your day, read through this list of the best Super Troopers quotes!

And don’t forget to check out these The Wedding Singer quotes and Free Guy quotes.

1. “Do I look like a cat to you boy? Am I jumpin’ around all nimbly bimbly from tree to tree? Am I drinking milk from a saucer? Do you see me eating mice?” – Trooper Carl Foster

2. “I’ll believe ya when me shit turns purple and smells like rainbow sherbet.” – Captain John O’Hagen

4. “Am I saying meow? Don’t think boy, meow, do you know how fast you were going?” – Trooper Carl Foster

6. “Bullshit. You couldn’t pull me over, and even if you did I’d activate my car’s wings, and I’d fly away.” – Trooper Rodney Farva

Lieutenant Thorny Ramathorn: “Good. I’ve been dead on all morning.”

8. Captain John O’Hagen: “What did you find out at the weigh station?”

9. Captain John O’Hagen: “Did you guys put in any transfers yet?”

Trooper Mac Womack: “I applied for a guard job—at the post office.”

15. “See if they’ve got any chocolate bananas—Foster?” – Trooper Rabbit Roto

Super Troopers Quotes You Won’t Get Enough Of

16. Captain John O’Hagen: “I swear to God I’ll pistol whip the next guy who says, ‘Shenanigans.’”

Trooper Mac Womack: “Hey Farva, what’s the name of that restaurant you like with all the goofy shit on the walls and the mozzarella sticks?”

Lieutenant Thorny Ramathorn: “You know, Farva, only you can make a dark man blush. And no, we’re not doing it.”

18. Trooper Mac Womack: “But our shenanigans are cheeky and fun!”

Lieutenant Thorny Ramathorn: “Yeah, and his shenanigans are cruel and tragic.”

Trooper Carl Foster: “Which makes them not really shenanigans at all.”

19. Officer Ursula Hanson: “You’re not going to tell anybody about this?”

Officer Ursula Hanson: “Don’t use that boyfriend voice with me.”

Super Troopers Quotes That Will Make You Laugh Out Loud

21. “Who can say ‘meow’ the most? You guys are real crazy; hey look out for these guys.” – Trooper Rodney Farva

22. “Get some rubber gloves. From now on, you’re my cleaning lady. Beat it!” – Captain John O’Hagen

23. “I’m not even gonna dignify myself with a response to that.” – Trooper Rodney Farva

24. “Do we look like the two dumbest guys in the world to you?” – Trooper Mac Womack

25. “No, Farva, you are under arrest for being a complete and total fuckhead.” – Trooper Mac Womack

26. “Just cleaning out the old locker, she stinks like ass, but I’ll sure miss her. I guess you could say that about all my girls.” – Trooper Rodney Farva

29. Lieutenant Thorny Ramathorn: “I’ll give you the fat guy for Foster. And, uh, how about that stupid guy for Rabbit?”

Officer Ursula Hanson: “Well, you’re going to have to be more specific; they’re both kind of fat and stupid.”

30. Officer Samuel Smy: “You know, you might get ahead around here if you made the extra effort.”

Officer Ursula Hanson: “Oh, why? Did you want me to wipe your ass?”

Did These Super Troopers Quotes Give You a Chance to Make Your Day a Little Bit Brighter?

Super Troopers is a goofy movie. Who would even dare question that? It’s a low-budget movie that has gained many fans since its release.

In the movie, our favorite officers are tasked to bust a drug ring to stay on the job. After all, their department has had many major budget cuts and a lot of criticism due to their incompetence. However serious the premise of the movie is, one cannot deny the humor and comedy inserted into each scene.

This might also be why State Troopers has become such a hit. Despite its ridiculous humor and scenes, seeing people of authority goofing around is a unique thing that many viewers appreciate. In a way, it helps us understand that people in power are humans like us, too.

There’s an abundance of swearing, sexual innuendos, vice, and violence in the movie. But, Super Troopers remains one of the funniest movies ever made for its fans. There are many things you can’t take seriously, yet it has a unique charm that’ll brighten your day every time you watch it!

Whenever you feel down and need a good laugh, remember to read through this list of Super Troopers quotes again! Keep the collection in your bookmarks so you can look back on your favorite lines any time!