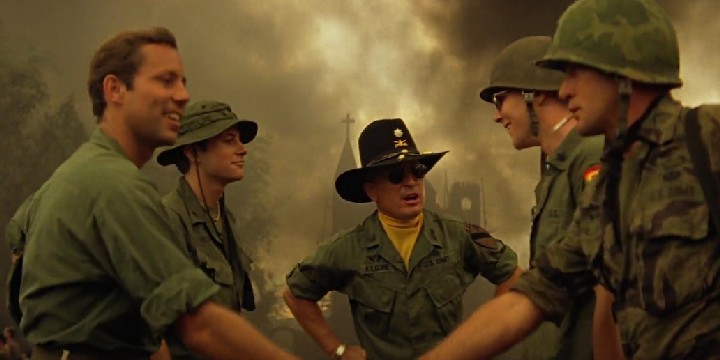 Here are the top 60 Apocalypse Now quotes to enlighten you about morality and freedom.

Apocalypse Now is an American war movie released in 1979. It tells the story of Captain Willard’s mission to assassinate an army officer named Colonel Kurtz.

In the movie, Colonel Kurtz was presumed to be an insane murderer that should be eliminated immediately.

But, as the story progresses and we learn more about the characters, we realize that war brings out the worst in people regardless of their moral compass.

Apocalypse Now has the power to expose the darkest parts of men in war, making it culturally and historically significant.

It helps us have heart and compassion for our veterans and active members fighting for our country.

Because of its relevance, even decades after its release, the movie continues to be one of the greatest ever made.

No doubt, Apocalypse Now is packed with valuable and must-read insights.

Make sure you read through to the end to find out more!

And don’t forget to check out these Full Metal Jacket quotes and We Were Soldiers quotes.

1. “Have you ever considered any real freedoms? Freedoms from the opinion of others, even the opinions of yourself?” – Colonel Walter Kurtz

2. “Everyone gets everything he wants. I wanted a mission, and for my sins, they gave me one.” – Captain Benjamin Willard

3. “You have to have men who are moral, and at the same time, who are able to utilize their primordial instincts to kill without feeling, without passion, without judgment.” – Colonel Walter Kurtz

4. “There are two of you. One that kills and one that loves.” – Roxanne Sarrault

5. “I am beyond their timid lying morality, and so I am beyond caring.” – Captain Benjamin Willard

6. “Trouble is I’d been back there, and I knew that it just didn’t exist anymore.” – Captain Benjamin Willard

7. “I’ve seen horrors, horrors that you’ve seen, but you have no right to call me a murderer. You have a right to kill me. You have a right to do that, but you have no right to judge me. It’s impossible for words to describe what is necessary to those who do not know what horror means. Horror, horror has a face, and you must make a friend of horror. Horror and moral terror are your friends. If they are not, then they are enemies to be feared.” – Colonel Walter Kurtz

8. “What do you call it when the assassins accuse the assassin? A lie. A lie and we have to be merciful.” – Colonel Walter Kurtz

9. “I used to think that if I died in an evil place, then my soul wouldn’t be able to make it to heaven.” – Jay Hicks

10. “He had only two ways home: death or victory.” – Captain Benjamin Willard

12. “I love the smell of napalm in the morning. You know, one time we had a hill bombed, for 12 hours. When it was all over, I walked up. We didn’t find one of ’em, not one stinking d*nk body. The smell, you know that gasoline smell, the whole hill. Smelled like victory.” – Lieutenant Colonel Bill Kilgore

13. “You can either surf, or you can fight!” – Lieutenant Colonel Bill Kilgore

14. “It was the way we had over here of living with ourselves. We’d cut them in half with a machine gun and give them a Band-Aid. It was a lie—and the more I saw of them, the more I hated lies.” – Captain Benjamin Willard

15. “We train young men to drop fire on people, but their commanders won’t allow them to write ‘f*ck’ on their airplanes because it’s obscene!” – Colonel Walter Kurtz

16. “Part of me was afraid of what I would find and what I would do when I got there. I knew the risks or imagined I knew. But the thing I felt the most, much stronger than fear, was the desire to confront him.” – Captain Benjamin Willard

17. “The Vietnamese, we worked with them, made something, something out of nothing. We want to stay here because it’s ours, it belongs to us. It keeps our family together. I mean, we fought for that. While you Americans, you are fighting for the biggest nothing in history!” – Hubert de Marai

18. “Hey, man, you don’t talk to the Colonel. You listen to him. The man’s enlarged my mind.” – American Photojournalist

20. “This is the way the f*cking world ends! Look at this f*cking sh*t we’re in, man! Not with a bang, but with a whimper. And with a whimper, I’m f*cking splitting, Jack.” – American Photojournalist

Apocalypse Now Quotes to Think About

21. “The man is clear in his mind, but his soul is mad.” – American Photojournalist

22. Roxanne Sarrault: “Do you know why you can never step into the same river twice?”

23. “They weren’t looking for anything more than a way home.” – Captain Benjamin Willard

25. “He likes you because you’re still alive.” – American Photojournalist

26. “When I was here, I wanted to be there.” – Captain Benjamin Willard

28. “I hardly said a word to my wife until I said yes to a divorce.” – Captain Benjamin Willard

Apocalypse Now Quotes That Expose the Realities of War

29. “The crew were mostly kids. Rock and rollers with one foot in their grave.” – Captain Benjamin Willard

30. “Charging a man with murder in this place was like handing out speeding tickets in the Indy 500. I took the mission. What the hell else was I gonna do?” – Captain Benjamin Willard

31. “We must incinerate them. Pig after pig. Cow after cow. Village after village. Army after army.” – Colonel Walter Kurtz

32. “I’m still only in Saigon. Every time I think, I’m gonna wake up back in the jungle.” – Captain Benjamin Willard

33. “With your army, your strength, your power, you could win if you want to! You can win!” – Francis de Marais

35. “As long as cold beer, hot food, rock ‘n’ roll, and all the other amenities remain the expected norm, our conduct of the war will only gain impotence.” – Colonel Walter Kurtz

36. “Someday, this war’s gonna end. That’d be just fine with the boys on the boat.” – Captain Benjamin Willard

37. “You understand, Captain, that this mission does not exist, nor will it ever exist.” – Colonel Lucas

38. “The war was being run by a bunch of four-star clowns who were gonna end up giving the whole circus away.” – Captain Benjamin Willard

39. “How many people had I already killed? There were those six that I knew about for sure. Close enough to blow their last breath in my face. But this time, it was an American and an officer. That wasn’t supposed to make any difference to me, but it did.” – Captain Benjamin Willard

40. “Well, you see, Willard, in this war, things get confused out there, power, ideals, the old morality, practical military necessity. But out there with these natives, it must be a temptation to be god because there’s a conflict in every human heart, between the rational and the irrational, between good and evil. And good does not always triumph. Sometimes, the dark side overcomes what Lincoln called the better angels of our nature. Every man has got a breaking point. You and I have one. Walter Kurtz has reached his. And very obviously, he has gone insane.” – General Corman

41. “I was going to the worst place in the world, and I didn’t even know it yet. Weeks away and hundreds of miles up a river that snaked through the war like a main circuit cable, plugged straight into Kurtz.” – Captain Benjamin Willard

42. “They were going to make me a major for this, and I wasn’t even in their f*cking army anymore. Everybody wanted me to do it, him most of all. I felt like he was up there waiting for me to take the pain away. He just wanted to go out like a soldier standing up, not like some poor wasted rag-assed renegade. Even the jungle wanted him dead. That’s who he really took his orders from anyway.” – Lieutenant Colonel Bill Kilgore

43. “Been here a week now, waiting for a mission, getting softer.” – Captain Benjamin Willard

45. “Why don’t you Americans learn from us, from our mistakes? Mon Dieux!” – Francis de Marais

46. “My orders say I’m not supposed to know where I’m taking this boat, so I don’t.” – Chief Quartermaster George Phillips

47. “Charlie didn’t get much USO. He was dug in too deep or moving too fast.” – Captain Benjamin Willard

48. “Lieutenant, bomb that tree line about 100 yards back! Give me some room to breathe!” – Lieutenant Colonel Bill Kilgore

Funny Apocalypse Now Quotes to Break the Seriousness of the Movie

49. “What the hell do you know about surfing, Major? You’re from g*dd*mn*d New Jersey!” – Lieutenant Colonel Bill Kilgore

50. “Every minute I stay in this room, I get weaker, and every minute Charlie squats in the bush, he gets stronger.” – Captain Benjamin Willard

51. “Any man brave enough to fight with his guts strapped to him can drink from my canteen any day.” – Lieutenant Colonel Bill Kilgore

More Apocalypse Now Quotes for Everyone Who Loves War Movies

53. “The heads. You’re looking at the heads.” – American Photojournalist

54. “One through nine, no maybes, no supposes, no fractions. You can’t travel in space. You can’t go out into space, you know, without, like, you know, uh, with fractions. What are you going to land on, one-quarter, three-eighths? What are you going to do when you go from here to Venus or something? That’s dialectic physics.” – American Photojournalist

60. “Sometimes, he goes too far. He’s the first one to admit it.” – American Photojournalist

Did These Apocalypse Now Quotes Make You Think About War and Being Human?

Society has long stigmatized and ignored the need to understand the dark sides of human nature. By watching Apocalypse Now, we take a step closer to understanding the madness of men and war.

In fact, through the movie, we can see the characters’ complexities and human characteristics being targeted in the middle of battle. Some become brutal, while others lose faith in others and their own souls. After all, the world’s struggles and ugly sides are exposed when war ensues.

An environment full of violence can undeniably turn the sanest men into unrecognizable beasts. We may not be in a position to choose whether or not to start or stop a war. But, as members of society, we all have the responsibility to build a more caring and kind community for everyone in the world.

We hope that these quotes were able to give you insight into morality and war. The next time you watch the movie, keep these top quotes in your mind and reflect on life.

Which Apocalypse Now quote is your favorite? Do you have more quotes to add? Leave a comment below!