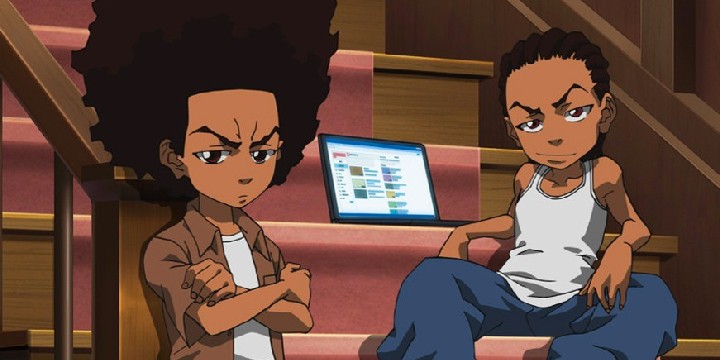 Read these The Boondocks quotes and learn more about life and society!

The Boondocks is an adult animated sitcom about the Freeman family, with members who have different beliefs and perspectives. They moved from Chicago to the boondocks because their granddad wanted to enjoy his golden years peacefully.

But, the siblings, Huey and Riley Freeman, have different plans. They are opinionated boys who provoke others in the neighborhood because of their different views and opinions!

Watching this series will help you understand cultures and lifestyles from different perspectives. If you’re interested to know more about these lessons, this collection should be on your must-read list!

And don’t forget to check out these Huey Freeman quotes and Archer quotes.

1. “Vision? What do you know about my vision? My vision would turn your world upside down, tear asunder your illusions, and send the sanctuary of your own ignorance crashing down around you. Now ask yourself, are you ready to see that vision?” – Huey Freeman

2. Riley Freeman: “I can’t wait for people to start hating; I can’t wait!”

Huey Freeman: “So you judge your success by the amount of ill will you generate from those around you.”

Riley Freeman: “Hey, if people aren’t mad at you, you’re doing something wrong.”

3. “It’s time to rise. It’s time to walk the road of freedom. It’s time to throw off the yoke of oppression, break free the chains, and regain control of our destinies. It’s time for revolution.” – Huey Freeman

4. “Maybe there are forces in this universe we don’t understand. But I still believe we make our own miracles.” – Huey Freeman

5. “Obi-Wan Kenobi once said, ‘Your eyes can deceive you, don’t trust them.’ It seems to be getting harder. Distinguishing reality from the illusions people make for us or the ones we make for ourselves. I don’t know, maybe that’s part of the plan—to make me think I’m crazy. It’s working.” – Huey Freeman

6. “Excuse me, everyone. I have a brief announcement to make, Jesus was Black. Ronald Reagan was the devil, and the government is lying about 9/11. Thank you for your time, and have a good night.” – Huey Freeman

7. “I did a song called, ‘Stomp Em’ in the nuts. Which was ironically about stomping n*ggas in the nuts.” – Thugnificent

8. “I’m trying to explain to you that Ronald Reagan was the devil. Ronald Wilson Reagan? Each of his names has six letters. 6-6-6? Man, doesn’t that offend you?” – Huey Freeman

The Boondocks Quotes That’ll Inspire You

9. “The ancestors already bought and paid for our crown; all we have to do is wear it.” – Huey Freeman

10. “I want my people to be free! I will enlighten the masses! My voice will ring out across the globe and make a difference.” – Huey Freeman

11. “I never prayed before. I don’t even know who I’m praying to. Maybe I’m too young to know what the world is supposed to be, but it is not supposed to be this. It can’t be this. So, please.” – Huey Freeman

The Boondocks Quotes for a Day Full of Wisdom

Huey Freeman: “Well, of course they’re shooting back at us! You’re robbing their store!”

Gin Rummy: “You can’t assume that people are going to shoot back at you. It was an unknown unknown.”

Huey Freeman: “Need I remind you that this has nothing to do with our original plan?”

Gin Rummy: “Damn it, Huey! Robbery etiquette says you can’t criticize a robbery plan during the actual robbery. You have to wait till the robbery’s over.”

13. Gin Rummy: “I always say the absence of evidence is not the evidence of absence.”

The Boondocks Quotes to Relive Your Favorite Scenes

15. “Well, if you ever want to talk, just remember—I’m always listening.” – The White Shadow

16. “What is the point of talking if nobody ever learns.” – Huey Freeman

17. “I did battle with ignorance today; ignorance won.” – Huey Freeman

Huey Freeman: “This is going to be the worst day of your life. I’m bringing nunchucks.”

19. Huey Freeman: “Why does it always have to end up like this?”

Riley Freeman: “‘Cause you’re a bitch.”

20. Robert Freeman: “Mr. Wuncler, I’m sorry about the whole, you know, my grandson shooting your grandson out of the window thing. Are you mad?”

Ed Wuncler: “In 30 years, that boy will be the President of the United States. And he’ll still be a f*cking idiot. Now, are we gonna have that drink or what?”

21. Huey Freeman: “You killed a man in defense of your ego.”

23. Doctor: “Mr. Stinkmeaner, the cancer has spread to your eyes. I’m afraid you will never see again.”

Colonel H. Stinkmeaner: “Well, at least I won’t have to look at your ugly *ss no more!”

24. Robert Freeman: “Stereotypes? In soul plane? That’s nonsense. Say, how about we tell your daddy we saw something else? Hmm?”

Huey Freeman: “That really doesn’t seem to be a good idea.”

Robert Freeman: “Hush, boy. You know, it’s okay to break the rules every once and a while. I won’t tell if you won’t.”

Riley Freeman: “We got to do something!”

Huey Freeman: “I’ve got an idea! Why don’t we go to college, so we don’t end up like Gangstalicious?”

More The Boondocks Quotes That Emphasize the Characters’ Different Views

Huey Freeman: “For being an irresponsible White person.”

28. “Black Entertainment Television is the worst thing I’ve ever seen in my life! Usher, Michael Jackson is not a genre of music! And don’t get me started on soul plane—I’ve seen what’s around the corner! I’ve seen what’s over the horizon! And I promise you, you naggers have nothing to celebrate! I know I won’t get there with you because I’m going to Canada!” – Martin Luther King, Jr.

29. “If n*gga moments had their own category, n*gga moments would be the third leading killer of Black men behind pork chops and F.E.M.A. It’s a fact.” – Huey Freeman

30. “Removing an evil nagger spirit from a negro is as hard as removing the stink from a hunk of shit.” – Uncle Ruckus

Did This Collection Make You Realize That Everyone Has a Unique Perspective?

Sometimes, we judge other people just because their appearance and culture are not familiar to us. But, it’s not okay to criticize an individual over things that are not under their control.

Even if it’s just a joke, you should not go that far because people have different levels of sensitivity. It might feel like a light jab to you. But, you don’t know how the other truly feels inside.

The Boondocks opened people’s eyes to different perspectives. Through it, we learn that even our closest friends or family members might have unique views and opinions. And, albeit different, we should respect them!

We should be more mindful of the words that come out of our mouths because we won’t ever be 100% sure how they affect others. Yes, there are circumstances where we can’t avoid misinterpreting how other people act. But, keep in mind that our opinions do not always need to be voiced.

Hopefully, this list of The Boondocks quotes was able to help you respect everyone’s uniqueness. Remember, judging others because they are different says a lot about your character. Think twice before you mock others!