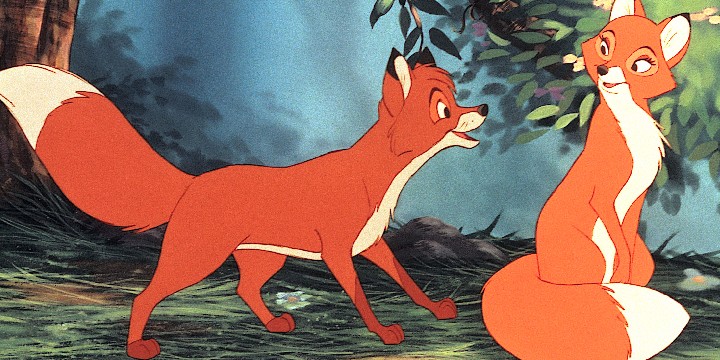 We’re sure you’ll learn many valuable insights you can apply in life through this list of The Fox and the Hound quotes!

We all need friends who will help us in life. And, while many believe in the saying, “Birds of the same feather flock together,” the truth is that the world we live in is filled with many different kinds of people—all unique and special in their own ways. However, being different doesn’t mean we can’t be friends.

This lesson is the main focus of The Fox and the Hound. In it, Tod, a fox, becomes best friends with Copper, a hound dog. They’re destined to become enemies in nature’s natural law—with Copper hunting down Tod.

Though the movie didn’t end with them standing side by side, from the events that unfolded, we can say that they remained friends, albeit not together. Copper and Tod still went their separate ways, but their friendship could never be broken.

As in the movie, life, society, and nature sometimes force us to act a certain way. But, we don’t always have to conform. So, read on and find meaningful lessons to live by!

And make sure to check out these Bambi quotes and Lady and the Tramp quotes.

Best The Fox and the Hound Quotes

2. “Goodbye may seem forever; farewell is like the end, but in my heart’s a memory, and there you’ll always be.” – Widow Tweed

Tod: “And we’ll keep on being friends forever. Uh, won’t we, Big Mama?”

Big Mama: “Darlin’, forever is a long, long time. And time has a way of changin’ things.”

Tod: “And we’ll always be friends forever, won’t we?”

5. Copper: “I thought that was you, Tod. I heard you coming. Boy, you’ve really grown.

Tod: You have, too, Copper. I saw you coming back with Chief and the hunter.”

Copper: “It’s great to see you, Tod. But you know, you—you shouldn’t be over here. You’re going get us both into a lot of trouble.”

Copper: “Tod, those days are over. I’m a hunting dog now.  You—you better get out of here before old Chief wakes up.”

6. “Chief, get back in there before I break your other leg.” – Amos Slade

Copper: “Us hound dogs always do that when we’ve found what we’ve been tracking.”

9. Copper: “I think I did a good job tracking down those varmints for you.”

Tod: “Gee willikers. Is he ever big? His ears aren’t as big as yours, Copper.”

Copper: “That’s not the part you gotta worry about.”

Copper: “That’s the part you gotta worry about!”

Boomer: “Oh, that farm boy! He knew nothing about fishin’!”

Dinky: “Now see what you’ve done?! You cost us our breakfast!”

Boomer: “I cost us our breakfast? It was your fault!”

Tod: “A worm for breakfast? Yeech!”

Dinky: “Yeah. Well, yakkin’ and shiverin’ ain’t getting us anywhere. We’ll get that no-good worm when we come back!”

15. Widow Tweed: “Amos Slade, you trigger-happy lunatic! Give me that gun!”

Amos Slade: “My radiator! Why, you blasted female! I’ll—.”

Tweed: “Hold it, right there!”

Amos Slade: “Dagnabbit, woman! Your thievin’ fox was after my chickens!”

Tweed: “Rubbish and poppycock! I don’t believe it. He wouldn’t hurt a thing!”

Amos Slade: “You callin’ me a liar, you muddle-headed female?! I saw it happen!”

Tweed: “Amos Slade, that temper of yours is going to get you into a lot of trouble someday!”

Amos Slade: “Temper?! Temper?! Woman, you ain’t seen my temper! If I ever catch that fox on my property again, I’ll blast him! And next time I won’t miss!”

Thought-Provoking The Fox and the Hound Quotes to Reflect On

16. “How about that? What does one have to do to get some sympathy around here?” – Chief

18. “If only the world wouldn’t get in the way If only people would just let you play They say you’re both being fools You’re breaking all the rules They can’t understand The magic of your wonderland.” – Big Mama

19. “If you’re so foxy and old Chief is so dumb, then why does that hound get the fox on the run? ‘Cause he’s got the hunter, and the hunter’s got the gun.” – Big Mama

The Fox and the Hound Quotes That Are Everybody’s Favorites

Copper:  “I’m on the trail of something.”

Tod: “Sure. Okay, now go ahead and close your eyes and count.”

22. “We met it seems, such a short time ago. You looked at me, needing me so. Yet from your sadness, our happiness grew. Then I found out, I need you, too. I remember how we used to play. I recall those rainy days, the fires glowed, which kept us warm. And now I find, we’re both alone.” – Widow Tweed

25. “Well, well. Company has come to see the invalid. How do you like that? They didn’t even ask how I’m feeling.” – Chief

Do You Admire the Friendship and Bond That Copper and Tod Have?

The world we live in is cruel, cold, and harsh. It allows us to build friendships and bonds that we think we’ll be able to keep forever. But, in the end, fate will come in and try to break them apart.

In The Fox and the Hound, Copper and Tod became friends despite the natural laws of nature and what society expected of them. They spent their childhood happily, even with the threat of adulthood that was about to come.

When they grew up and stepped into what we can call their roles in society, the world tested them. It tried to keep them apart, but in the end, Copper went against the rules to save his one true friend. And, though they couldn’t stay together until the end, it’s still beautiful to see how strong and impactful friendship can be in life.

So, aspire to build long-lasting friendships that’ll stand the test of time. You don’t have to be the same as your friends in thoughts, words, and deeds. But, it’s essential to be able to support one another, come what may.

With that, we hope we were able to show you the special bond that Copper and Tod have. It’s a complicated world, but everything will be more bearable with friends.