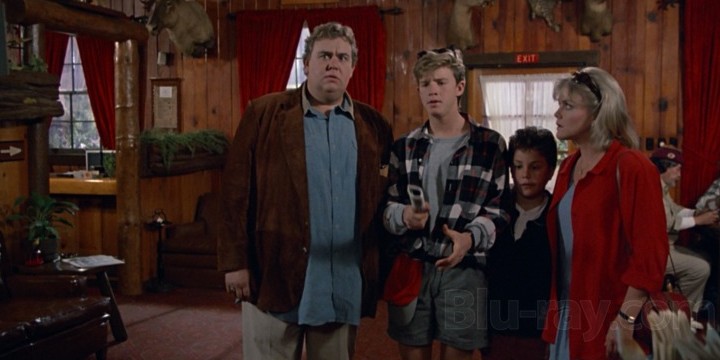 Here are some awesome The Great Outdoors quotes that will give you and your family some meaningful life lessons!

The Great Outdoors is a comedy movie starring Dan Aykroyd as Roman Craig and John Candy as Chet Ripley. Chet is a simple and humble person who always wants to spend time with his family. On the contrary, Roman is a rude and offensive individual obsessed with money.

Their differences have always led to each other’s annoyance and hilarious fights. As a loving husband and father, Chet takes his family to a lake resort in Wisconsin, expecting that they’ll have peaceful quality time with each other.

But, all his expectations collapse when unexpected and unwelcome visitors, Roman and his family, arrive. They went on to experience endless misfortunes because of Roman, a mythical bear, and other wildlife creatures.

The Great Outdoors is a hilarious movie embedded with great lessons. So, if this made you curious about the plot and its characters, read our complete list below!

And don’t forget to check out these Coming to America quotes and Uncle Buck quotes.

Roman Craig: “How come Chet’s kids look at him like he’s Zeus and ours look at me like I’m a rack of yard tools at Sears? Why can’t they connect with me?”

Kate Craig: “Well, maybe if you spent less time at work and more time with us, it would—.”

2. Roman Craig: “I think we should go into town tomorrow and pick up a ski boat. What do you say? Sound good, guys? Uncle Roman will blow some coin on a kick-ass drag boat!”

Roman Craig: “Pontoon boat? What the hell are you gonna do with a pontoon boat? Retake Omaha Beach?”

3. “So when you go to bed tonight, and you hear a noise, whatever you do, don’t look out the window—because there might be a bear!” – Chet Ripley

4. Roman Craig: “How about the gourmet here? You know what he wanted? Hotdogs! You know what they make those things out of, Chet? You know? Lips and *ssholes!”

Chet Ripley: “Hahaha, I guess I’m old-fashioned. I like *ssholes.”

Roman Craig: “Ha, and I like lips! Kisses Connie’s lips If I could market lips like those, I would make another million.”

5. Roman Craig: “I think that just about does it.”

Roman Craig: “It might take him a moment for that last bite to go down, but it will go down!”

6. Roman Craig: “There’s no mystery here, Chet. I know how you really feel about me.”

Roman Craig: “Yeah, and I knew that if I was ever to give you something, you figure there’d be strings attached.”

Chet Ripley: “Is that a fact?”

Roman Craig: “Yeah, that’s a fact. At our wedding, you were in the John. Kate and Connie’s dad. You were talking. Do you happen to remember the substance of that conversation?”

Roman Craig: “Well, I do, and it’s one I’ll never forget. I heard you say—and I quote—‘that Roman Craig is a crooked son of a bitch.’ Next time you stab somebody in the back, Chester, you better check under the stalls for feet. You may think I’m made out of armor and nails, man, but when I get cut, it hurts. That cut me, and I hurt.”

Chet Ripley: “Roman, I’m really sorry. I had a lot to drink that night. I really don’t remember saying that, but if you said I did, then I must have. I apologize to you both. It was a terrible thing to say.”

Roman Craig: “Look, I don’t hold grudges, and I don’t have any hard feelings. To show you I’m the type of guy who can forgive and forget, well, I’d still like to offer you a piece of that investment.”

7. “What a gas! Chet’s gonna sh*t a solid gold brick when he sees us; what a great surprise!” – Roman Craig

8. “Wait a minute. No way! Wait a hot sh*tting minute. Rule one, no relative of mine is going to eat hot dogs as long as he is sharing my cabin.” – Roman Craig

9. “Good evening. How’s it going? Listen, girls, uh—as your father, I feel it incumbent upon me to set the record straight on the validity of the tale which Uncle Chet shared with us this evening. I know that a terrifying story like that coming from the mouth of a recognized authority figure could be traumatizing for kids like yourselves. I know that because I had a similar experience with my Uncle Roy and a story he used to tell about a family who went into the woods and was attacked by a band of escaped Army psychiatric patients who’d been subjected to violent, hellish, torturous behavior-modification experiments. It seems they escaped from the metal boxes the Army kept them in, found his family in the woods, fell upon them, slaughtered them, and ate them. Now that story, phew, it gave me nightmares not to be believed. Well, I thought that Uncle Chet’s story upset you in the same way. I’m here to say that there actually is no bear and that all that Uncle Chet was saying was just a yarn, spinning for our entertainment. And even if there were a bear out there, I’m in the house to protect you. So, no more thinking about bears. Alright? No more thinking about unpleasant things. We’re gonna close our eyes and dream about nice things. About cuddly, soft, fluffy things. Okay? Super. Good night. Sleep tight.” – Roman Craig

The Great Outdoors Quotes That’ll Give You Goosebumps

10. Roman Craig: “The rest of us are all probably going to die of heart attacks and strokes long before you.”

Chet Ripley: “I hope so. Wouldn’t that be great? Get just to see a bunch of people drop that you hate. God, that would be something I tell you.”

Kate Craig: “It touched me!”

Roman Craig: “It’s been touching you for 12 years; you never freak!”

Roman Craig: “It’s served me well; I’m the one with the Mercedes.”

Roman Craig: “Are you jealous? Chester!”

Chet Ripley: “Don’t call me Chester! Call me that one more time, and you’re gonna go home with a dent in your forehead!”

Chet Ripley: “Would you like one to match his?”

Humorous The Great Outdoors Quotes for a Day Filled With Laughter

14. Roman Craig: “These are the biggest worms I have ever encountered.”

Chet Ripley: “No, that was the truth.”

Chet Ripley: “That was a shot.”

Roman Craig: “Speaking of shots, set us up!”

Ben Ripley: “Does this mean we won’t be getting Christmas presents this year from Aunt Kate and Uncle Roman?”

Connie Ripley: “Okay, nobody is blowing anything out of their *ss. What we are having is a little problem, and it doesn’t mean your father and I don’t love your Aunt Kate and Uncle Roman. What it means is that we’re having some emotions.”

Connie Ripley: “I don’t want to hear anything else about anyone blowing anything out of their *ss!”

Ben Ripley: “You might as well blow the whole family out of your *ss while you’re at it, Dad!”

Chet Ripley: “Do you understand what’s going on here, son? Do you know what your mother and I are trying to say?”

Chet Ripley: “Well, it’s the first good idea you’ve had since you’ve been here. And by the way, don’t steal any of our stuff.”

Kate Craig: “Haha, what stuff is there to steal?”

Connie Ripley: “We got stuff!”

24. “You wouldn’t know a good time if it fell out of the sky and landed on your face and started to wiggle!” – Roman Craig

Chet Ripley: “You were picking your nose.”

Did This Collection Motivate You to Prioritize Your Family’s Happiness?

We, as humans, tend to chase after wealth and fame. There’s nothing inherently wrong with this, especially if you have a family to support. But, we must remember not to be too into work that we forget to spend quality time with our loved ones—just like what happened with Roman.

After crashing Chet and his family’s vacation, he realizes that money is not a measurement of how good you are as a father and husband. In reality, what matters is how you provide joy to your family.

Beyond that, this movie makes us realize that spending time with family has a powerful contribution to our happiness and peace. So, let’s learn from Chet’s actions and Roman’s mistakes and realizations.

We hope that this collection was able to help you see the value of spending time with your family to form deep, meaningful bonds with each other. Remember that your family’s happiness will depend on how much time you spend together!