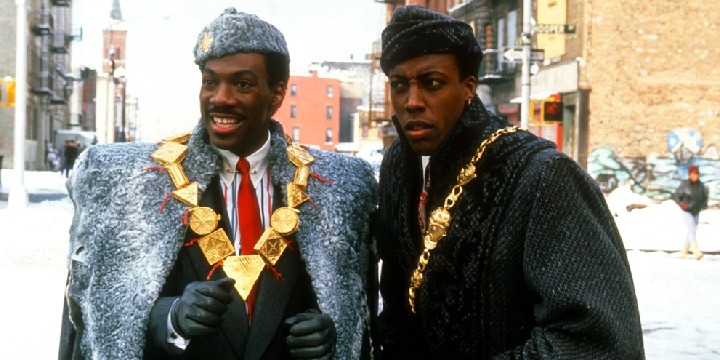 These Coming to America Quotes will inspire you to find the love that you deserve!

Coming to America is a romantic comedy movie that became a cult classic. Its plot focuses on a wealthy prince, Akeem Joffer, who is dissatisfied with how all girls kneel to serve him just because he is a royal. When his parents arranged his marriage without his consent, Akeem Joffer took action.

He flew from Africa to New York with his servant and friend, Semmi, to find a bride who would love him for who he was. Akeem then crosses paths with Lisa McDowell, who possesses all the qualities he seeks.

Their relationship was difficult to keep, but Akeem did everything to pursue the woman he wanted to be with.

So, if you’re also looking for the one for you, these Coming to America quotes will be a perfect piece of inspiration!

And don’t forget to check out these Uncle Buck quotes and The Great Outdoors quotes.

Prince Akeem Joffer: “No journey is too great when one finds what he seeks.”

2. “So you see, my son, there is a very fine line between love and nausea.” – King Jaffe Joffer

3. King Jaffe Joffer: “Time does fly fast, my son. It seems only yesterday I ordered your first diaper change. Now you’re a man about to be married. She will give you much pleasure, don’t you think?”

Prince Akeem Joffer: “I’m not sure if I’m ready.”

King Jaffe Joffer: “Son, I know we never talked about this. I always assumed you had sex with your bathers. I know I do.”

4. Semmi: “Let me get this straight. You can have a woman that will obey your every command, but you want a woman who has an opinion!”

Prince Akeem Joffer: “Only dogs are to obey.”

5. Prince Akeem Joffer: “Behold, Semmi. Life. Real life! A thing that we have been denied for far too long! Good morning, my neighbors!”

6. Prince Akeem Joffer: “But when I marry, I want the woman to love me for who I am, not because of what I am.”

King Jaffe Joffer: “And who are you?”

Prince Akeem Joffer: “I am a man who has never tied his own shoes before.”

King Jaffe Joffer: “Wrong. You are a prince who has never tied his shoes. Believe me. I tied my own shoes once. It is an overrated experience.”

Coming to America Quotes That Live in Our Heads Rent-Free

7. “I want a woman that will arouse my intellect as well as my loins.” – Prince Akeem Joffer

8. “Fascinating! Semmi, look at this! America is great indeed. Imagine a country so free, one can throw glass on the streets!” – Prince Akeem Joffer

10. Darryl Jenks: “So, what do you people play in Africa? Chase the monkey?”

Prince Akeem Joffer: “No, our favorite game there is football, but I believe you call it ‘soccer.’”

11. “But it is also a tradition that times must and always do change, my friend.” – Prince Akeem Joffer

12. “Is it just me, or does every woman in Queens have some kind of an emotional problem?” – Prince Akeem Joffer

13. Lisa McDowell: “Would you really have given up all of this just for me?”

Prince Akeem Joffer: “Of course. If you like, we can give it all up now.”

14. Prince Akeem Joffer: “I have recently been placed in charge of garbage. Do you have any that needs to be disposed of?”

Prince Akeem Joffer: “When it fills up, call me. I will take it out most urgently.”

Prince Akeem Joffer: “When you think of garbage, think of Akeem.”

Coming to America Quotes for Your Entertainment

15. “Oha, it is my 21st birthday. Do you think perhaps just once I might use the bathroom by myself?” – Prince Akeem Joffer

16. “I want a woman so black when you make love you need a flashlight.” – Morris

17. I don’t know whether to shake your hand or kiss it, or bow, or what. I feel like breakdancing.” – Cleo McDowell

18. Prince Akeem Joffer: “It would be wise for you to put the weapon down.”

Prince Akeem Joffer: “Please refrain from using any further obscenities in the presence of these people.”

Prince Akeem Joffer: “I’m warning you. I will be forced to thrash you.”

Short Coming to America Quotes That You Must Read Today

20. “If loving the Lord is wrong, then I don’t wanna be right!” – Reverend Brown

21. “But how can a man get excited about a woman he’s never seen?” – Prince Akeem Joffer

26. “Now I want you to reach onto God’s unchanging hand. He helped Joshua fight the battle of Jericho. He helped Daniel escape the lion’s den. He helped Gilligan get off the island.” – Reverend Brown

27. Prince Akeem Joffer: “Sir, where can one go to find nice women here?”

Clarence: “You gotta get out and look; they ain’t just gonna fall on your lap.”

Semmi: “We’ve been to every bar in Queens.”

Clarence: “Well, that’s where you messed up. Son, you can’t go to a bar to find a nice woman. You gotta go to a nice place, a quiet place like a library, there are good women there and ‘erm, church, they’re good girls.”

Interesting Coming to America Quotes That Are Worth Remembering

Clarence: “Yeah, I met Dr. Martin Luther King in 1962 in Memphis, Tennessee. I walking down the street, minding my own business, just walking on. Feeling good. I walk around the corner, a man walks up, hit me in my chest, right. I fall to the ground, right? And I look up, and it’s Dr. Martin Luther King. I said, ‘Dr. King?’ and he said, ‘Oops, I thought you were somebody else.'”

Clarence: “Knocked the wind out of me; yes, he did.”

29. Prince Akeem Joffer: “So, you would share your bed and your fortune with a beautiful fool?”

Semmi: “That is the way it has always been with men of power. It is tradition.”

30. Prince Akeem Joffer: “Oh sir, the giants of New York took on the packers of green bay. And in the end, the giants triumphed by kicking an oblong ball made of pigskin through a big ‘H.’ It was a most ripping victory.”

Cleo McDowell: “Son, I’m only going to tell you this one time.”

Cleo McDowell: “If you want to keep working here, stay off the drugs.”

31. Saul: “A man has the right to change his name to whatever he wants to change it to. And if a man wants to be called Muhammad Ali, godammit, this is a free country, you should respect his wishes and call the man Muhammad Ali!”

Saul: “Then you’re a putz. All of you are putzes. They should change the sign outside from My-T-Sharp to the ‘Three Putzes.’”

34. “Hey, I started out mopping the floor just like you guys. But now, I’m washing lettuce. Soon I’ll be on fries, then the grill. In a year or two, I’ll make assistant manager, and that’s when the big bucks start rolling in.” – Maurice

35. “Girl, you look so good, someone ought to put you on a plate and sop you up with a biscuit.” – Reverend Brown

Did This Collection Make You Believe That Only True Love Can Bring You Real Happiness?

We are all looking for the kind of love that’ll make each day worth living. But, our world does not hand us everything on a silver platter. As Prince Akeem demonstrated, finding true love requires much effort and sacrifice.

In the movie, Akeem has all the luxuries many people desire, yet he is still unsatisfied. He was even offered the opportunity to marry a girl who would serve him for the rest of his life, but he declined. He believed true happiness could only be found when people fall in love with each other’s personalities rather than their social standing.

Coming to America makes us realize that when you are genuinely passionate about something or someone, you will be able to do everything for them. It also helps us understand that social status, influence, and money are nothing without love and genuine affection.

So, before you commit, ensure that person is worth all your love. Remember, the perfect one for you will make you feel safe and secure through effort and determination. Never scale down your standard for love because, if it’s genuine, it’ll go its way up to reach you.