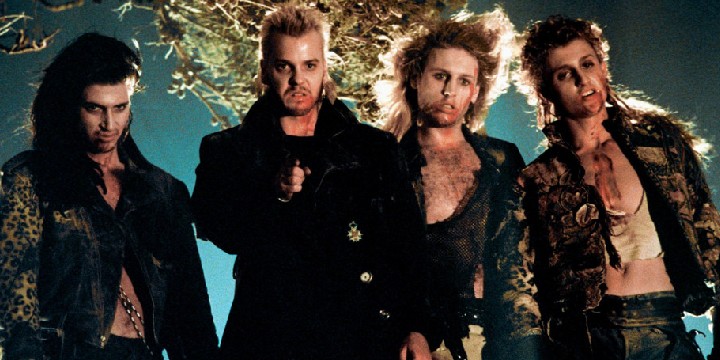 These top 40 The Lost Boys quotes will show you the movies’ most memorable lines that will spook you, make you laugh out loud, and teach you about life.

The Lost Boys’ first movie was released in 1987, and it was a critical and commercial success earning over $32 million. It is a black comedy horror movie directed by Joel Schumacher about two brothers discovering vampires. Due to its success, two more movies, The Lost Boys: The Tribe and The Lost Boys: The Thirst, were produced.

Yes, it is a horror-comedy movie full of rock music and ’80s pop culture. However, it also contains a hidden meaning about youth and its horrors. So, if you are interested, then we highly encourage you to check out our complete collection below.

And don’t miss out these vampire quotes and Twilight quotes.

1. “Look at your reflection in the mirror. You’re a creature of the night, Michael, just like out of a comic book! You’re a vampire, Michael.” – Sam Emerson

2. “We’re on the right trail. Flies and the undead go together like bullets and guns. Come on.” – Edgar Frog

4. “You don’t have to beat me, Michael. You’ve just gotta try and keep up.” – David Powers

6. “If all the corpses buried around here were to stand up all at once, we’d have one hell of a population problem.” – Grandpa

8. “One thing about living in Santa Carla I never could stomach, all the damn vampires.” – Grandpa

9. Michael Emerson: “If something happens down there, I won’t have the strength to protect you.”

Sam Emerson: “This time, I’ll protect you. Even though you’re a vampire, you’re still my brother.”

10. Alan Frog: “You think we just work at a comic book store for our folks, huh?”

Sam Emerson: “Actually, I thought it was a bakery.”

Edgar Frog: “This is just a cover. We’re dedicated to a higher purpose. We’re fighters for truth, justice, and the American way.”

The Lost Boys Quotes That Will Teach You About Vampires

12. “I think I should warn you all, when a vampire bites it, it’s never a pretty sight. No two bloodsuckers go the same way. Some yell and scream, some go quietly, some explode, some implode, but all will try to take you with them.” – Edgar Frog

13. “We’ve located the nest of the vampires deep within this abandoned slaughterhouse. It’s also haunted by cannibal pirates. It’s built on an ancient Indian burial ground where they used to burn witches.” – Lars Von Goetz

14. “Oh, I’m actually scanning the book into my Kindle. I decided, you know, I might as well educate myself about all the possibilities of the dark underworld.” – Edgar Frog

15. “Don’t ever invite a vampire into your house, you silly boy. It renders you powerless.” – Max

16. “Did you know that lycanthrope or female werewolves, she-wolves, actually can change anytime they want to? They don’t have to do it under a full moon. That’s a myth.” – Edgar Frog

17. “You’d better get yourself a garlic T-shirt, buddy, or it’s your funeral.” – Edgar Frog

Memorable The Lost Boys Quotes for All the Fans

20. “It’s that girl from the boardwalk. Is she one of them? She’s one of them! And don’t tell me it doesn’t make her a bad person, Mike.” – Sam Emerson

21. “I can never sleep with the closet door open, either. Not even a crack. Sam, this is a terrible thing to admit, but I think that one of the reasons I divorced your father was because he never believed in the closet monster.” – Lucy Emerson

23. “A lot of valuable information can be gained by reading comic books.” – Edgar Frog

24. “Rules! We’ve got some rules around here. Second shelf is mine. That’s where I keep my root beers and my double-thick Oreo cookies. Nobody touches the second shelf but me. There’s another rule around here, and I want you to pay close attention. Don’t touch anything. Everything is exactly where I want it.” – Grandpa

Cool The Lost Boys Quotes That Are Full of Action

26. “Listen, just so you know, if you try to stop us or vamp out in any way, I’ll stake you without even thinking twice about it!” – Edgar Frog

29. Alan Frog: “Think of it more as a survival manual. There’s our number on the back, and pray you never need to call us.”

Sam Emerson: “I’ll pray I never need to call you. Sure.”

David Powers: “I tried to make you immortal.”

Michael Emerson: “You tried to make me a killer!”

David Powers: “You are a killer.”

31. Max: “It was all going to be so perfect, Lucy. Just like one big, happy family. Your boys and my boys.”

Sam Emerson: “So what’s the rush? You’re chasing that girl, aren’t you? Come on, admit it. I’m at the mercy of your sex glands, bud.”

Sam Emerson: “So what are you, the flying nun?”

Lucy Emerson: “Oh, they’re just young. We were that age too, once. But they dress better.”

36. Michael Emerson: “Grandpa, is it true that Santa Carla’s the murder capital of the world?”

Grandpa: “There are some bad elements around here.”

Sam Emerson: “Wait a second, let me get this straight. You’re telling me we’ve moved to the murder capital of the world?”

37. “Lucy, you’re the only woman I ever knew that didn’t improve her situation by getting divorced.” – Grandpa

39. “I tried to eat that guy. Do you realize that? Do you know what it’s like for me to want to drink blood? Do you know how disgusting that is? I’m a vegetarian!” – Nicole Emerson

40. “What, you don’t like rice? Tell me, Michael, how could a billion Chinese people be wrong?” – David Powers

Did The Lost Boys Change Your Perspective About Youth?

The Lost Boys was born from the idea of J.M. Barrie’s character, Peter Pan, who never grows up like the vampires in the movie. It is a dark reflection of what being like a kid forever means.

We can all agree that staying in our youth forever was once our dream growing up. All the responsibilities and commitments are too much because it tests our maturity in life. Like Sam and Michael, who have discovered their own version of Neverland, they were forced to come to terms with what it means to be human and make the decision to grow up.

So, we hope these The Lost Boys quotes were able to encourage you to enter the world of adults. Remember that never growing up is not all rainbows and fairies. It may also mean entering the lair of vampires and experiencing different horrors like what Sam and Michael did.

Which The Lost Boys quote is your favorite? What did you learn from this list? Comment your answers below!