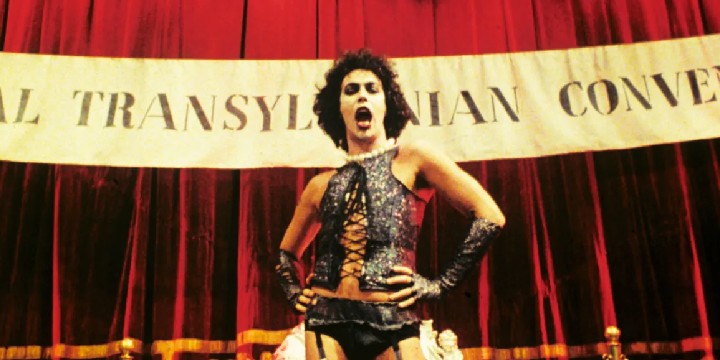 These The Rocky Horror Picture Show quotes will remind you that there are no boundaries when it comes to love and sexuality!

The Rocky Horror Picture Show started as a stage play in 1973. It is a cult classic movie known for its unique style, audience participation, and sexual innuendos. In fact, many scenes are considered dangerous to perform because of their sexual nature.

The story begins with the innocent couple, Janet and Bard, who are lost and seek help at the castle of Dr. Frank-N-Furter. For those who don’t know, Dr. Frank-N-Furter is from the planet Transsexual in the galaxy of Transylvania. He is a mad scientist who lives alone with his servants, Riff Raff and Magenta.

When Janet and Bard arrive at the castle looking for directions to their destination, they are seduced by the environment. Also, a storm was raging that night, and they had a flat tire, so they decided to stay for the night. The couple doesn’t realize that this will be the start of their love story’s horror.

If you’re curious about what will happen to them and the other characters in the movie. Read on and find out what lessons you can learn from The Rocky Horror Picture Show!

And don’t forget to check out these Frankenstein quotes.

1. “It’s not easy having a good time! Even smiling makes my face ache.” – Dr. Frank-N-Furter

3. “I would like, if I may, to take you on a strange journey.” – Criminologist

4. “’Cause I’ve seen blue skies through the tears in my eyes. And I realize I’m going home.” – Dr. Frank-N-Furter

6. “That’s a rather tender subject. Another slice, anyone?” – Dr. Frank-N-Furter

9. Brad Majors: “What have you done with Janet?”

Dr. Frank-N-Furter: “Nothing. Why do you think I should?”

11. “You’re like a sponge. You take, take, take, and drain others of their love and emotion.” – Columbia

14. “If only we were amongst friends or sane persons!” – Janet Weiss

Magenta: “You’re into a time slip.”

Riff Raff: “And nothing can ever be the same.”

17. “Tonight, my unconventional conventionalists, you are about to witness a new breakthrough in biochemical research, and paradise is to be mine!” – Dr. Frank-N-Furter

18. “Do you think I made a mistake splitting his brain between the two of them?” – Dr. Frank-N-Furter

The Rocky Horror Picture Show Quotes to Think About

19. “And crawling, on the planet’s face, some insects, called the human race. Lost in time and lost in space—and meaning.” – Criminologist

20. “There’s a light in the darkness of everybody’s life.” – Brad Majors and Janet Weiss

21. “The darkness must go down the river of night’s dreaming. Flow morphia slow, let the sun and light come streaming into my life.” – Riff Raff

22. “It took a small accident to make it happen, and that’s how I discovered the secret, the elusive ingredient, that spark that is the breath of life. Yes, I have that knowledge. I hold the secret. To life itself! You see, you are fortunate, for tonight is the night that my beautiful creature is destined to be born! Hoopla!” – Dr. Frank-N-Furter

Dr. Frank-N-Furter: “And you shall receive it in abundance!”

25. “So come up to the lab and see what’s on the slab. I see you shiver with anticipation. But maybe the rain isn’t really to blame, so I’ll remove the cause, but not the symptom.” – Dr. Frank-N-Furter

What’s the Most Valuable Lesson You’ve Learned From These The Rocky Horror Picture Show Quotes?

Sometimes, we don’t reveal our true selves to others because we fear being judged or criticized. But, The Rocky Horror Picture Show teaches us that we must accept ourselves and be proud of our own culture, and identity.

“Don’t dream it, be it,” is a quote from the movie that has inspired many people. This is because this line teaches us that we should take pride in our identities instead of conforming to society’s standards. We should be proud of who we are, not ashamed of it.

We know this isn’t easy. After all, it’s easier to conform than to stand out, especially when you fear judgment or criticism. However, if you genuinely want to be happy and live authentically, you must embrace your individuality and let go of anything holding you back.

In this way, like the characters in the movie, you will free yourself from the expectations of others and can make choices based on what brings you joy. To end this, we hope these The Rocky Horror Picture Show quotes were able to help you accept yourself. Always keep this collection in mind whenever you need a guide in the future!