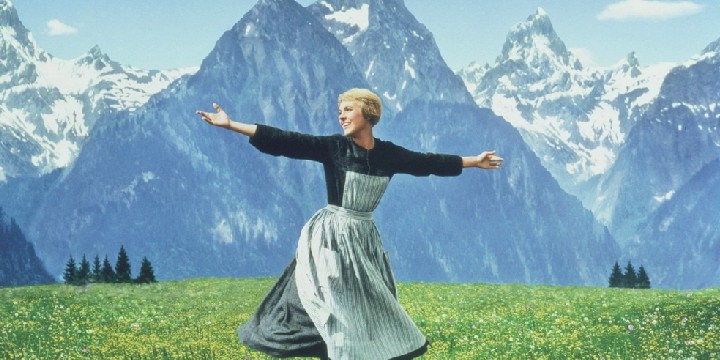 These The Sound of Music quotes will make you sing day in and day out!

Practically everyone in our generation knows of The Sound of Music. It’s a 1965 musical movie starring Julie Andrews, playing Maria, who takes on a job as the von Trapp children’s governess. During her employment, she must decide whether she wants to become a nun or not.

While everything in the movie is set before the start of World War II, Maria and her family’s singing shows us the power of music and how beautiful the world is.

Read on to learn more about Maria and how she captured the hearts of the von Trapps. We’ve got the best The Sound of Music quotes just for you.

And don’t forget to check out these Mary Poppins quotes and My Fair Lady quotes.

Best The Sound of Music Quotes

1. “When the Lord closes a door, somewhere He opens a window.” – Maria

3. “Somewhere out there is a lady who I think will never be a nun. Auf Wiedersehen, darling.” – Baroness Elsa von Schraeder

4. “After all, the wool from the black sheep is just as warm.” – Sister Margaretta

5. “You brought music back into the house. I had forgotten.” – Captain von Trapp

6. “You know how Sister Berthe always makes me kiss the floor after we’ve had a disagreement? Well, lately I’ve taken to kissing the floor whenever I see her coming, just to save time.” – Maria

7. Captain von Trapp: “It’s the dress. You’ll have to put on another one before you meet the children.”

Maria: “But I don’t have another one. When we entered the abbey our worldly clothes were given to the poor.”

Captain von Trapp: “What about this one?”

Maria: “The poor didn’t want this one.”

9. “Well, you can’t marry someone when you’re in love with someone else, can you?” – Captain von Trapp

Mother Abbess: “Some people would call that honesty.”

11. “Climb every mountain, ford every stream, follow every rainbow, ’til you find your dream.” – Mother Abbess

12. “Maria, these walls were not meant to shut out problems. You have to face them. You have to live the life you were born to live.” – Mother Abbess

Maria: “You didn’t tell me how old you are, Louisa.”

14. “The first rule of this household is discipline.” – Captain von Trapp

Gretl von Trapp: “It got caught.”

Maria: “Caught in what?”

17. “When you know the notes to sing, you can sing most anything.” – Maria

18. “When the dog bites, when the bee stings, when I’m feeling sad, I simply remember my favorite things, and then I don’t feel so bad.” – Maria

Gretl von Trapp: “Why am I always last?”

Max Detweiler: “Because you are the most important.”

20. “My fellow Austrians, I shall not be seeing you again, perhaps for a very long time. I would like to sing for you now, a love song. I know you share this love. I pray that you will never let it die.” – Captain von Trapp

21. “There’s nothing more irresistible to a man than a woman who’s in love with him.” – Baroness Elsa von Schraeder

Maria: “Oh, no, sir. I’m sorry, sir. I could never answer to a whistle. Whistles are for dogs and cats and other animals, but not for children and definitely not for me. It would be too humiliating.”

Captain von Trapp: “Fraulein, were you in this much trouble at the Abbey?”

Maria: “Excuse me, sir. I don’t know your signal.”

23. Captain von Trapp: “Fraulein Maria, did I or did I not say that bedtime is to be strictly observed in this household?”

Maria: “Yes, well the children were scared of the thunderstorm and—you did, sir.”

Captain von Trapp: “And do you or do you not have trouble following these simple instructions?”

Maria: “Only during thunderstorms, sir.”

24. Captain von Trapp: “Is it possible, or could I have just imagined it—have my children, by any chance, been climbing trees today?”

Captain von Trapp: “Oh, is that what you call them?”

Maria: “I made them—from the drapes that used to hang in my bedroom.”

Maria: “They still have plenty of wear left. The children have been everywhere in them.”

Captain von Trapp: “Do you mean to tell me that my children have been roaming about Salzburg dressed up in nothing but some old drapes?”

Maria: “Mm-hm. And having a marvelous time!”

25. “Fond as I am of you, I really don’t think you’re the right man for me. You’re, um—you’re much too independent. And I—I need someone who needs me desperately or at least needs my money desperately.” – Baroness Elsa von Schraeder

Is The Sound of Music a Go-to Movie in Your Household?

The Sound of Music is packed with incredible singing, meaningful lyrics, and catchy tunes. The movie is so timeless that its soundtrack is being played in many households worldwide, even today. Together with all this, The Sound of Music imparts lessons on family, new opportunities, and more.

One of the most wisdom-packed lines from the movie comes from Maria when she says, “When the Lord closes a door, somewhere He opens a window.” This is excellent advice for everyone who has failed, been rejected, or lost hope. Life will often discourage us because of its many downs, but hold on to your faith; everything happens as God intends.

Love is also another central theme of The Sound of Music. It’s a movie that tackles love between a man and a woman and love between a parent and a child. There have been lots of twists and turns, but eventually, Maria, Captain von Trapp, and the kids lived a life filled with unending love for each other.

We’re sure The Sound of Music will remain in the hearts of its fans for years to come. So, revisit our list whenever you want to read lines from your favorite characters!