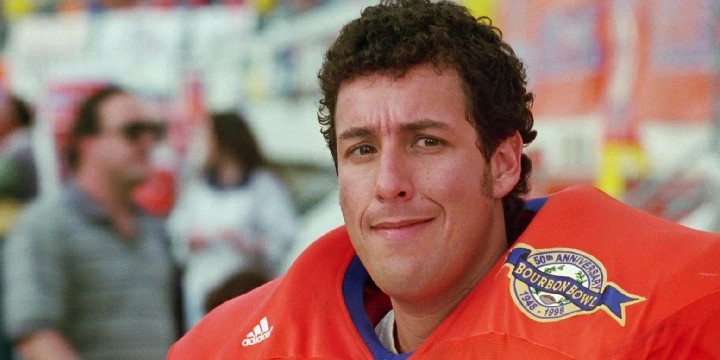 Brace yourself with these The Waterboy quotes that will help you get up when you are tackled by life.

The Waterboy is a sports comedy film released in 1998. It features Adam Sandler, a famous comedy actor, as Bobby, the protagonist of the film.

You will never be short of laughs from this film, and along the way, you’ll get tons of values that you can apply as you move through life.

It is a movie that centers on love, compassion, and empathy.

And don’t forget to check out these Ghostbusters quotes and Anchorman quotes.

1. “You don’t have what they call ‘the social skills.’ That’s why you never have any friends, except for yo’ mama.” – Mama Boucher

3. Mama’ Boucher: “Bobby, they ever catch that gorilla that busted out at the zoo and punched you in the eye?”

4. “No son of mine is gonna play any foosball.” – Mama Boucher

7. “Everything is the Devil to you, Mama. Well, I like school, and I like football. And I’m gonna keep doin’ them both because they make me feel good.” – Bobby Boucher Jr.

8. “Gatorade not only quenches your thirst better, it tastes better too, idiot.” – Coach Klein

10. “Mama say that happiness is from magic rays of sunshine that come down when you feelin’ blue.” – Bobby Boucher Jr.

11. “Mama not a fan of restaurants, or, of, of, of me, goin’ to one, but, but, but if you like, sometimes, on a Sunday afternoon, with charcoal bi-biscuits and a grill.” – Bobby Boucher Jr.

12. “Bobby Boucher, what did Mama tell you about girls!” – Mama Boucher

13. “Mama, I gotta read this book and six other books tonight, or else I can’t play football.” – Bobby Boucher Jr.

20. “My Mama says that alligators are ornery because they got all them teeth and no toothbrush.” – Bobby Boucher Jr.

21. “Are men supposed to wear pajamas featuring a cartoon character by the name of Deputy Dawg?” – Mama Boucher

Hilarious The Waterboy Quotes to Lighten Your Mood

27. Paco: “Look at Bobby tackle. I haven’t seen a tackle like that since Joe Montana.”

Walter: “Joe Montana was a quarterback, you idiot.”

29. “I am not what you would call a handsome man. The good Lord chose not to bless me with, with charm, athletic ability, or a fully functional brain. You see, you’re an inspiration to all of us who, who weren’t born handsome, and charming, and cool, and, and—.” – Paco

34. “Which brings me to my second point, kids. Don’t do crack.” – Lawrence Taylor

37. “I don’t believe in that sort of thing, personally. Astrology is one of the many tools of the devil.” – Mama Boucher

39. “The medulla oblongata is where anger, jealousy, and aggression come from. Now, is there anybody here who can tell me where happiness comes from? Anyone? All right, let’s hear what Mama has to say on the subject.” – Professor

Remarkable The Waterboy Quotes That Will Soften Your Heart

Mama Boucher: “Did somebody hurt you, my boy? Who hurt you? You tell Mama who hurt you!”

43. “Well, ya better do something. You gotta stick up for yourself, Bobby.” – Coach Klein

45. “It is imperative that you allow me to be your waterboy.” – Bobby Boucher Jr.

47. “Yes, yes, that is another first for me. And I appreciate what you’re showing me right now.” – Bobby Boucher Jr.

49. “You come into Mama’s bedroom. Mama will brush your hair.” – Mama Boucher

51. Bobby Boucher Jr.: “You do not have to, have to pay me. I-I will do it for free. Just promise me that you will never distribute the contents of that jug to any human person.”

55. “The hell with school, dopey! Take the money! You and me can be partners! Just like that Tiger Woods and his dad! Uh-oh.” – Roberto

57. “Hey Walter! I bet you fifty bucks Guy Grenouille throws a touchdown pass on the first play. Check it out!” – Paco

58. “But what about the finely tuned athletic machine?” – Bobby Boucher Jr.

61. Mama Boucher: “I don’t ever want you associating with little girls.”

Mama Boucher: “Because little girls are the Devil!”

66. Mama Boucher: “You gonna lose all your fancy ‘foolsballs’ games! And you’re gonna fail your big exam! Because school is—.”

69. “You said it was gonna be a touchdown pass, you crazy asshole!” – Walter

Courageous The Waterboy Quotes to Fire Up Your Soul

73. “You gonna add another championship trophy to the old case downstairs?” – Lynn Swann

76. “Foosball? Bunch of overgrown monsters man-handlin’ each other. ‘Member when that man wanted you to play foosball, Bobby?” – Mama Boucher

77. “Yeah, that was pretty funny. How ’bout the time Bobby tackled the guy from Louisville and threw him into the stands?” – Lyle Robideaux

Mean Quotes From The Waterboy

82. “I don’t want that loser on the team. Everybody’s gonna laugh at us.” –Guy Grenouille

Other The Waterboy Quotes When You Need Some Laughs

81. “Y’all remember the time he intercepted the ball, and his pants fell off, and he ran for the touchdown bare ass?” – Guy Grenouille

83. “That’s kinda like my old man told me one time, Lynn. The only thing better than a crawfish dinner is five crawfish dinners.” – Coach Red Beaulieu

85. “I’ll be playing with your Mama tonight.” – West Mississippi Lineman

87. “Oh yea, plenty of times. The other night, I was with my Mama and Coach Klein at the same time.” – Bobby Boucher Jr.

88. “Now, is there anyone here that can tell me why most alligators are abnormally aggressive? Anybody? Anyone? Yes, sir. You, sir.” – Professor

90. “Well, even though he was slightly discourteous to me recently, I’m gonna have to say, Captain Insano.” – Bobby Boucher Jr.

Which Quotes Helped You Stand Up for Yourself?

Although Bobby is a peculiar character, we often find ourselves relating to his hardships in life. Football has become a metaphor for the battles we face head-on.

In reality, we cannot always depend on our loved ones for support. Sometimes, fighting for yourself is needed for us to grow and mature.

Some things can be really hard, but knowing that we overcame them on our own builds our confidence and strength. It also helps us stand up for others and protect them. May this collection motivate you to hold firm and tackle life.

So, what other Adam Sandler films do you like? Are you a fan of The Waterboy? We would like to hear from you in the comments below.