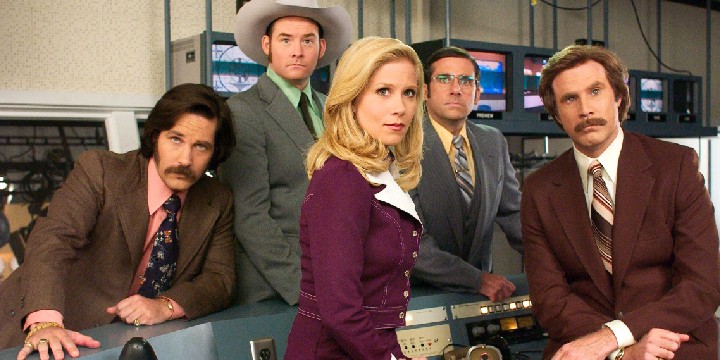 We’ve rounded up our favorite Anchorman quotes that’ll fuel you up for the day.

Anchorman: The Legend of Ron Burgundy is a satirical comedy released in 2004 that tells the story of the top-rated newsman in San Diego. The movie is set in the 1970s when discrimination against women was much more evident than today. Because of this, when the company welcomed Veronica Corningstone, there were many qualms from the other employees, especially Ron.

Everything went downhill when Veronica was promoted to co-anchor after receiving higher ratings than Ron. This shows that no matter what others think, women are equal to men and can do whatever men can do. In the end, Ron accepted this fact, and they worked together as co-anchors for the World News Center.

There should be no discrimination between men and women, and though Anchorman uses comedy to bring this to light, it is still an effective and relevant message. Read on to learn more about the characters and the lessons they share with viewers!

And don’t forget to check out these Cool Hand Luke quotes and Joe Dirt quotes.

1. “It is anchorman, not anchor lady! And that is a scientific fact!” – Champ Kind

Ron Burgundy: “I’m very important. I have many leather-bound books, and my apartment smells of rich mahogany.”

Ed Harken: Dammit: “Who typed a question mark on the teleprompter?”

4. Ron Burgundy: “Boy, that escalated quickly. I mean, that really got out of hand fast.”

Champ Kind: “It jumped up a notch.”

5. Ron Burgundy: “It’s a formidable scent. It stings the nostrils. In a good way.”

Ron Burgundy: “Brian, I’m gonna be honest with you, that smells like pure gasoline.”

Brian Fantana: “They’ve done studies, you know? Sixty percent of the time, it works every time.”

6. “I wanna say something. I’m gonna put this out there: if you like it, you can take it. If you don’t, send it right back. I want to be on you.” – Ron Burgundy

7. “I love scotch. Scotchy scotch scotch. Here it goes down, down into my belly.” – Ron Burgundy

9. “Where’d you get those clothes? The toilet store?” – Brick Tamland

Anchorman Quotes That Live in Our Heads Rent-Free

10. “Oh, Ron, there are literally thousands of men that I should be with instead, but I am 72% sure that I love you!” – Veronica Corningstone

11. “I’m gonna punch you in the ovary; that’s what I’m gonna do. A straight shot. Right to the babymaker.” – Ron Burgundy

12. “Are you trying to tell me that there’s a party in your pants and that I’m invited?” – Veronica Corningstone

13. Ed Harken: “A lot of you have been hearing the affiliates complaining about a lack of diversity on the news team.”

Champ Kind: “What in the hell’s diversity?”

Ron Burgundy: “Well, I could be wrong, but I believe diversity is an old, old wooden ship that was used during the Civil War era.”

Ed Harken: “Ron, I would be surprised if the affiliates were concerned about the lack of an old, old wooden ship, but nice try.”

14. “Okay, before we start, let’s go over the ground rules. No touching of the hair or face. And that’s it. Now, fight!” – Ron Burgundy

Anchorman Quotes to Change the Way You Think

19. “I’m going to do the thing that God put Rod Burgundy on this Earth to do: have salon-quality hair and read the news.” – Ron Burgundy

20. “I’m sorry, Veronica. We’ve had this discussion before. I’m not going to let you be the anchor.” – Ed Harken

22. “Who the hell is Julius Caesar? You know I don’t follow the NBA.” – Ron Burgundy

23. “The only way to bag a classy lady is to give her two tickets to the gun show and see if she likes the goods.” – Ron Burgundy

24. Ron Burgundy: “Sharp broadcast all of you. Great show, especially from you on the floor. A lot of hustle. I liked that.”

Ed Harken: “Do you even know what you just said?”

Ed Harken: “You’re probably right, but I’ve got to fire you.”

More Anchorman Quotes to Add to Your Must-Reads

26. “Oh, I can barely lift my right arm ’cause I did so many. I don’t know if you heard me counting. I did over a thousand. Just watch out for the guns; they’ll getcha.” – Ron Burgundy

27. Ron Burgundy: “Discovered by the Germans in 1904, they named it San Diego, which of course, in German means a whale’s vagina.”

Ron Burgundy: “I’m sorry, I was trying to impress you. I don’t know what it means. I’ll be honest, I don’t think anyone knows what it means anymore. Scholars maintain that the translation was lost hundreds of years ago.”

Veronica Corningstone: “No, that’s—that’s what it means. Really.”

28. “You know how to cut to the core of me, Baxter. You’re so wise. You’re like a miniature Buddha, covered with hair.” – Ron Burgundy

29. “It’s terrible, she has beautiful eyes, and her hair smells like cinnamon!” – Ron Burgundy

Ron Burgundy: “Really? What was her name?”

Ron Burgundy: “That’s not a good start, but keep going.”

Brian Fantana: “She was Brazilian, or Chinese, or something weird. I met her in the bathroom of a K-Mart, and we made out for hours. Then we parted ways, never to see each other again.”

What’s Your Main Takeaway From Anchorman?

Work is a competition, and sometimes even the survival of the fittest. For jobs like the one Ron Burgundy has, it’s usually so cutthroat that you always have to give your best every second of the day. However, sadly, a lot of people think that women have no place at work and that only men can excel.

This was what they believed in the 1970s in Anchorman: The Legend of Ron Burgundy. Unfortunately, many still think the same way to this day.

Although that’s the case, remember that change starts with just one person. If you are a man who believes that women can do the same things as men do, then you will be able to open up new opportunities for them. In the same way, as a woman, don’t listen to the limitations set upon you by others.

Anchorman is a comedy, but it certainly leaves a lasting impact on the lives of every viewer. With that, we hope we were able to give you a more profound understanding of this 2004 satirical comedy release!