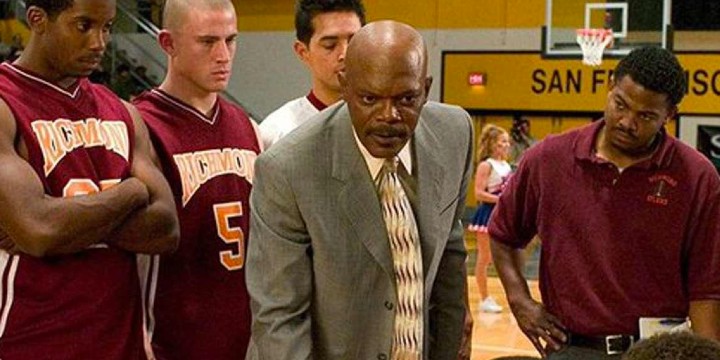 This compilation of Coach Carter quotes will get you in the zone and give you the right mindset when it comes to victory.

Coach Carter is a sports drama movie about a high school basketball coach who made drastic changes to the school’s rotten system.

His dedication and strict discipline turned a struggling team into an undefeated powerhouse respected by their opponents.

Because it’s based on actual events, the movie became even more relevant to students and teachers worldwide.

Indeed, his life and career served as a positive influence that inspired many people to be brave and stand for what they believed in.

Through Coach Carter, we’re able to see the pride of a real sportsman who positively molded the lives of his players inside and outside the basketball court.

Check out our complete list below if you want to learn from him as well!

And make sure to read these Moneyball quotes and Remember the Titans quotes.

1. “If you listen and learn, you will win basketball games. And gentlemen, winning in here is the key to winning out there.” – Coach Ken Carter

3. “When we step on the floor every second that clock is ticking, we are pedal to the metal.” – Coach Ken Carter

5. “You have achieved something that some people spend their whole lives trying to find. What you achieved is that ever-elusive victory within.” – Coach Ken Carter

6. “Your playing small does not serve the world. There is nothing enlightened about shrinking so that other people won’t feel insecure around you. We are all meant to shine as children do.” – Coach Ken Carter

7. “Now just because you deserve this doesn’t mean they’re gonna give it to you. Sometimes you gotta take what’s yours.” – Coach Ken Carter

8. Coach Ken Carter: “What is your deepest fear Mr. Cruz, that you are inadequate?”

Timo Cruz: “Our deepest fear is not that we are inadequate. Our deepest fear is that we are powerful beyond measure. It is our light, not our darkness, that most frightens us. And as we let our own lights shine, we unconsciously give other people permission to do the same. As we are liberated from our own fear, our presence automatically liberates others.”

9. “You men played like champions. You never gave up. And champions, they hold their heads high.” – Coach Ken Carter

10. “We control the tempo of the game. We make them play Richmond Oiler ball.” – Coach Ken Carter

11. “We treat ourselves with respect.” – Coach Ken Carter

12. “Push the ball, go hard to the hole. Everybody attacks the board. You got that?” – Coach Ken Carter

14. “You said we’re a team. One person struggles, we all struggle. One person triumphs, we all triumph.” – Jason Lyle

16. “The board sent the message loud and clear. Winning basketball games is more important than graduating from high school and going to college. I’m sorry, I just can’t support that message.” – Coach Ken Carter

17. “Some of my teammates went to prison. Some of them ended up dead. I took this job because I wanted to effect change in a special group of young men, and this is the only way that I know how to do that.” – Coach Ken Carter

18. “Since when is winning not enough? Playing hard not enough?” – Coach Ken Carter

21. “Now, I want you to go home and look at your lives tonight and look at your parents’ lives and ask yourself, ‘Do I want better?’ If the answer is yes, I will see you here tomorrow.” – Coach Ken Carter

22. “If you endorse the fact that 15, 16, 17-year-old boys cannot honor the simple rules of a basketball contract, how long do you think it’ll be before they’re out there breaking laws?” – Coach Ken Carter

23. “You really need to consider the message you’re sending these boys by ending the lockout. It’s the same message that we as a culture send to our professional athletes, and that is that they are above the law.” – Coach Ken Carter

Coach Carter Quotes to Live By

25. “Let’s take the time to say whatever it is we want while the doors are closed.” – Coach Ken Carter

26. “Those are numbers. Those are some stats for your ass.” – Coach Ken Carter

28. “And, your job is to educate these kids. I suggest you start doing yours.” – Coach Ken Carter

29. “Everything I knew about basketball, I learned from women.” – Coach Ken Carter

35. “Richmond High only graduates 50% of the students. And of those that do graduate only 6% go to college. Which tells me, when I walk down those halls and I look in your classrooms maybe only one student is going to go to college.” – Coach Ken Carter

36. “And the answer for young African-American men here is this: probably to prison.” – Coach Ken Carter

39. “If you don’t perform in the classroom, you will not play.” – Coach Ken Carter

41. “Before you leave my gym, you must pay an exit price of 50 made free throws before you can go.” – Coach Ken Carter

42. “You gave such a good answer and gave the coach attitude, you win the bonus prize of 500 pushups! Would you like to go for the grand prize of 1000?” – Coach Ken Carter

44. “Gentlemen, you told me you deserved to be here. Well, you’re not playing like it.” – Coach Ken Carter

Coach Carter Quotes to Remind You of Your Favorite Scenes

47. “Okay Mr. Cruz. Leave my gym right now. I’ll ask you one more time to leave my gym before I help you leave.” – Coach Ken Carter

48. “‘Nigga’ is a derogatory term used to insult our ancestors. See, if a white man used it, you’d be ready to fight. Your using it teaches him to use it. You’re saying it’s cool. Well, it’s not cool, and when you’re around me, I don’t want to hear that shit! Are we clear?” – Coach Ken Carter

49. “And, I promise you, I will do everything in my power to get you to college and a better life.” – Coach Ken Carter

51. “Junior Battle is like a solar eclipse. We rarely see him, but when we do, it’s always special.” – Mr. Gesek

52. “We have a game tomorrow so get some rest tonight. Remember: ties and jackets tomorrow.” – Coach Ken Carter

54. Timo Cruz: “You don’t understand. I wanna come back on the team. What do I gotta do to play?”

Coach Carter: “Don’t worry about that, son. Just come inside.”

More Coach Carter Quotes for True Fans of the Movie

56. “Everything in my power tells me if I take you back I’ll be making a mistake and you’ll make a fool of me.” – Coach Ken Carter

57. “Let’s see how many you can do in—one hour and seven minutes.” – Coach Carter

58. “From what I can see a very confused and scared young man.” – Coach Ken Carter

59. “What you achieved goes way beyond the win-loss column or what’s gonna be written on the front page of the sports section tomorrow.” – Coach Ken Carter

Coach Carter: “What do we love?”

Did These Quotes Inspire You to Be Victorious in Whatever You Do in Life?

Coach Carter is a movie that revolves around basketball. However, the lessons embedded in it do not end in the four corners of the gym. It extends to some essential aspects of life, like the importance of good discipline and education.

He used basketball to reach and touch the students’ hearts. But, he also made it clear to them that there’s more to life than just sports. While we should enjoy and cultivate our skills and passions, we should also look ahead and make sure we secure the future we’ll be living in.

The movie also zoomed in on the importance of adhering to a disciplined life. This is a powerful fact of life that applies to basketball players and everyone in the world. After all, being self-disciplined would boost our chances of achieving our life goals.

Undoubtedly, Coach Carter is a great movie that will create champions in sports and real life. Let these quotes from Coach Carter himself and the rest of the characters guide you as you go toward the path to your dreams!

Which of these quotes inspired you to achieve greatness? Are you ready to become a champion? Share your thoughts and join our discussion below.