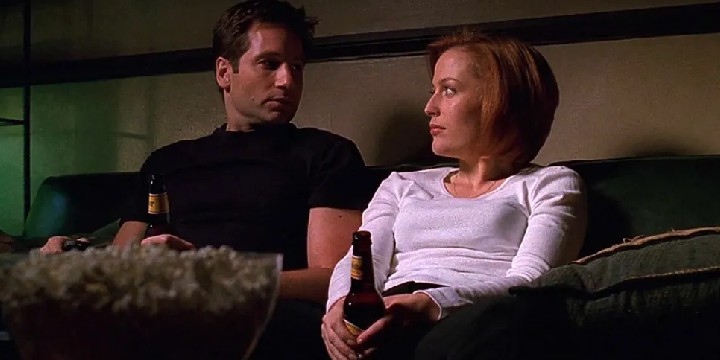 If you love anything related to sci-fi or the paranormal, then you’re in for a treat with these The X-Files quotes we’ve compiled!

This series revolves around FBI Special Agents Dana Scully and Fox Mulder, whose task is investigating X-File cases. There are all sorts of things recorded under these files, but there’s one thing in common. These are all unsolved cases involving the paranormal.

Discussing the paranormal is already exciting. However, what makes The X-Files even better is that Mulder and Scully’s beliefs couldn’t have been more different. Mulder believes in aliens, the paranormal, and anything related to them; Scully, on the other hand, wants to prove everything through science.

Their contradictions make The X-Files even more complicated and meaningful. So, if you’re curious about their cases and how they solved them, read on. We have the best quotes from this iconic TV series.

And don’t forget to check out these NCIS quotes and Prison Break quotes.

1. “Though we may not be alone in the universe, in our own separate ways, on this planet, we are all alone.” – José Chung

2. “The truth is out there, but so are lies.” – Dana Katherine Scully

3. “Maybe faith is a type of insanity.” – Dana Katherine Scully

4. “You want to know about anarchy? You don’t tell me where that other bomb is, and I’ll make sure you spend your prison time on your bigoted hands and knees putting a big smile on some convict’s face.” – Fox William Mulder

5. “Did you really think you could call up the Devil and ask him to behave?” – Fox William Mulder

7. “Dreams are the answers to questions that we haven’t yet figured out how to ask.” – Fox William Mulder

8. “What if there was only one choice and all the other ones were wrong? And there were signs along the way to pay attention to.” – Dana Katherine Scully

9. “The road of excess leads to the palace of wisdom.” – Fox William Mulder

10. “Sometimes the only sane answer to an insane world is insanity.” – Fox William Mulder

Thrilling The X-Files Quotes for Sci-Fi and Mystery Enthusiasts

11. “Alien technology being used against us, not by aliens, not with aliens, but by a venal conspiracy of men against humanity.” – Fox William Mulder

12. “The science that we were taught takes us but a distance towards the truth.” – Dana Katherine Scully

13. “I’ve often felt that dreams are answers to questions we haven’t yet figured out how to ask.” – Fox William Mulder

14. “Mulder, sometimes I think the world is going to hell, and we’re the only two people who can save it.” – Dana Katherine Scully

15. “It’s been said that fear of the unknown is an irrational response to the excesses of the imagination. But our fear of the every day, of the lurking stranger and the sound of footfalls on the stairs, the fear of violent death and the primitive impulse to survive, are as frightening as any X-File, as real as the acceptance that it could happen to you.” – Fox William Mulder

16. “I don’t have time for your convenient ignorance.” – Dana Katherine Scully

19. “I want you to do me a favor. It’s not negotiable. Either you do it, or I kill you. You understand?” – Dana Katherine Scully

20. “I’m asking you to trust my judgment. To trust me.” – Dana Katherine Scully

21. “’Baby’ me, and you’ll be peeing through a catheter.” – Dana Katherine Scully

22. “To doubt it is a failure of more than the imagination. It is a failure to recognize the limits of our own stupidity, the nascency of our science, the rudiment of our tools.” – Cigarette Smoking Man

23. “The world will go on. Just in my image instead of God’s.” – Cigarette Smoking Man

24. “I didn’t set out to destroy the world, Mulder. People did.” – Cigarette Smoking Man

The X-Files Quotes That Will Have Your Mind Reeling

26. “All we can do, Scully, is pull the thread, see what it unravels.” – Fox William Mulder

27. “You see a man lying here, a seemingly weak man, but I’m the most powerful man in the world.” – Cigarette Smoking Man

30. “Scully, I gave up profiling before I gave up monsters. You’ve seen one serial killer; you’ve seen ’em all.” – Fox William Mulder

What Do You Think Is the Most Unique Thing About The X-Files?

If you’re an FBI agent, you would probably be one of the best if you were assigned to cover the X-Files. However, the show was successful not only because of its storyline. The actors had great chemistry, and each case seemed better than the last!

More than that, the show’s underlying themes make us believe in the power of hope, truth, and teamwork. All these things come into play and are made evident through Scully and Mulder’s interactions.

Facing the paranormal is scary, and we might even think we’re not powerful enough to overcome it. Yet, no matter how big of an adversity they faced, they always held on to hope and believed that they would conquer them through teamwork and unending effort.

Scully and Mulder were also in the business of finding out the truth. Their job’s main objective was to uncover the mysteries and conspiracies beneath these unsolved cases. Each of their cases was hard and challenging in its own way, but they persevered until the end.

Indeed, The X-Files is a must-watch! With that, we hope this list of its best quotes was able to entice you to grab your popcorn and watch all 11 seasons and maybe even the movies!