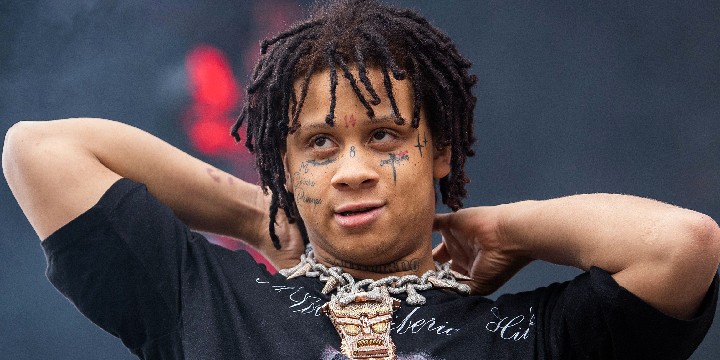 Allow these Trippie Redd quotes to give you some insights into the world of hip hop!

Despite being young, he is known worldwide for his writing and singing. Also, aside from having great melody and rhythm, his lyrics are also wonderfully written to share his wise messages across all his listeners.

Read on to find out how he became an iconic and successful rap artist.

And don’t forget to check out these Juice WRLD quotes and Lil Uzi Vert quotes.

2. “These people don’t want me alive, no, they want to play games with my life.”

4. “I do stuff on my own, I think for myself, and I’ve always looked out for others.”

5. “I want to accomplish something for myself and set a bar for myself, for somebody to be like, ‘Damn, Trippie legendary. He did such and such.’”

6. “I wanna prevail at everything.”

7. “Don’t worry about what other people say, you could be doing what they’re doing or even better than them.”

8. “We a different kind, and we be on different times.”

Trippie Redd Quotes About Being a Rapper

15. “Okay, and this is for every rapper that had a shot at sendin’ me your efforts ain’t getting you anywhere in this industry.”

Trippie Redd Quotes on His Great Passion for Music

17. “I listen to my music all day, every day. I study my craft. I try to figure things out within listening to my music.”

19. “I really just blend like rock, R&B, and rap together to create a sub-genre, but it’s very versatile.”

20. “Music took me from a real dark place to a real bright one.”

21. “I knew I was gonna experience loss down the line, but I never knew, like, it was gonna hit that hard. I didn’t think it was gonna be like that.”

23. “When it pops up, be ready. You learn from situations and when you learn from other situations, you’re better and you’ll know what’s next. You’ll grow and hopefully, the next one will be that.”

25. “I don’t really got no ultimate goal. I just wanna improve and get better.”

26. “I try to stay in tune with myself. I gotta figure out myself more.”

Trippie Redd Quotes About His Opinions and Beliefs

29. “It’s not about what hits Billboard or how many views you got on a video. It’s about copies sold. It’s about streams, you know?”

31. “If I die and I gotta couple Grammys on me, more than a couple hits on me, I got some plaques, and I got Billboards still up, and I done touched a lot of people’s souls and I’m viral, once that happens, then you can judge all you want.”

32. “I believe in the Devil. I believe there’s a God, too. I met God at church—the Catholic church.”

33. “I try to be tapped in with most of the artists coming up. I love finding new artists and listening to a new vibe. I love everything about finding someone that’s talented.”

34. “You gon’ feel it a lot more smoking. When you smoke, you gon’ feel the pain even more. You’re high, you’re going to be focused on that thing.”

37. “I did alternative rock before. That’s why my style is the way it is now.”

38. “I honestly just live in Trippie Redd’s world. I don’t live in America—I ain’t gonna live anywhere else but America.”

39. “I don’t really got too much on my mind to do, musically. Anything in music I wanna accomplish for sure but it’s not my life goal. Be happy, you know? Live my life the way I want to.”

42. “No artist that beefs with me or talks down on my name has that many platinum songs. They’re all gold.”

43. “I recorded it in the dark. I didn’t have no pen, no pad. I was in the dark in the whole opposite room. It was cold as f*ck. Nobody was watching me and sh*t, so I got really into character and made this sh*t.”

45. “Change is okay in every aspect because of these artists.”

46. “Get whatever tattoos you want, just make sure they mean something at least.”

47. “Me and my friends made a group called 1400 and the number always stuck with me. I always see it everywhere I go. There’s an angel behind the number, it’s an angelic number.”

Trippie Redd Quotes and Lyrics That Zoom in on Love

55. “Shawty, I just want your love for a minute. I be captain, baby, you can be lieutenant. Swear I lose my mind every time that I’m in it. You won’t get a dime, nah, no, not mine.”

56. “You used to say you in love, I used to say that sh*t back. Taking that sh*t from the heart, now look where the f*ck where we at.”

Trippie Redd Quotes and Lyrics to Keep You Entertained

59. “I was trapping, getting it by my ‘lone. Rocket got them pints for the low. Chris got the rocket, he gon’ blow.”

63. “If you ain’t heard then you’re too late. Yeah, fresh and clean like toothpaste.”

65. “I was in Lil Wayne’s studio, and I had recorded over this Detail-beat. And it was the ‘F*ck Love’ of course. And then I had posted on Instagram snippet the night after, or the day after matter of fact. And X had, he had texted me, he was like, ‘Bro, I need that.’ Sent it to him, and he was like, ‘Bro, I’m putting this on my album.’ I’m like, ‘Alright, pet.’ And that’s how it happened.”

66. “I just bought my mom a new wraith, thanking God for a brand new day, and I’m on the road, I’m just thinking about your face.”

67. “What’s your net worth? Diamonds ’round my neck like what my neck worth.”

69. “My favorite thing from Taco Bell is the Doritos locos tacos supreme.”

What Are Your Thoughts on Trippie Redd’s Rapping Style?

Rapping became a stepping stone and even opened up new opportunities for Trippie Redd. In fact, he is one of the younger hustlers who remains motivated throughout his career.

Trippie’s hardships are reflected in every beat of his music and song lyrics. Nonetheless, he did not let anything stand in his way of becoming a massive star in the music industry.

Unexpected events may occur in our lives, but it is entirely up to us how we respond to them. Trippie, like many others, never stopped learning and trying out new ways to live the life he desired. Let his quotes remind you to keep going and just believe in yourself wholeheartedly!

Which of these Trippie Redd quotes empowered you the most? Drop them down in the comments section below!