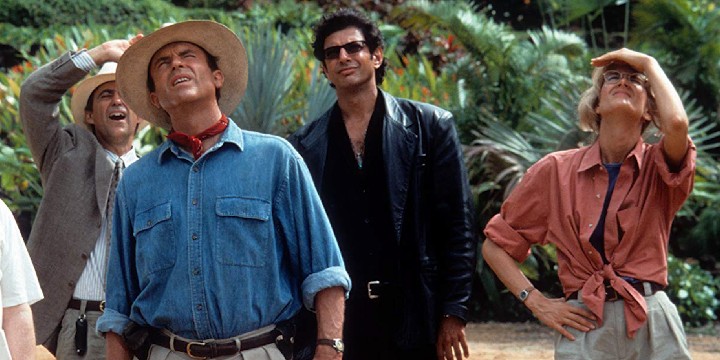 Experience thrill and excitement that would never go extinct through this collection of Jurassic Park quotes.

Jurassic Park is a sci-fi movie franchise that shows us what it’s like to live alongside dinosaurs.

Genius scientists successfully cloned and bred dinosaurs and planned to create an attraction out of them.

But, as the story progresses, they’ll come to see how playing with natural selection will lead to some pretty nasty consequences.

Everything in this movie franchise is awe-inspiring and screams adventure.

Michael Crichton, the author of the book that Jurassic Park was based on, truly was a genius with an extraordinary imagination to create a world where dinosaurs still live.

Indeed, Jurassic Park is one of the best sci-fi movie franchises ever made.

Each scene is a work of art and reveals the evolution of life and nature’s law of survival. So, if you’re looking for the movies’ best quotes, this collection is for you.

And don’t forget to check out these dinosaur quotes and Jaws quotes.

1. “If there is one thing the history of evolution has taught us, it’s that life will not be contained.” – Ian Malcolm

2. “All major changes are like death. You can’t see what is on the other side until you get there.” – Ian Malcolm

3. “If you want to leave your name on something, fine, but stop putting it on other people’s headstones.” – Ian Malcolm

4. “What’s so great about discovery? It’s a violent, penetrative act that scars what it explores. What you call discovery, I call the rape of the natural world.” – Ian Malcolm

5. “Some of the worst things imaginable have been done with the best intentions.” – Alan Grant

6. “Your scientists were so preoccupied with whether or not they could, they didn’t stop to think if they should.” – Ian Malcolm

7. “If I may—um, I’ll tell you the problem with the scientific power that you’re using here, it didn’t require any discipline to attain it. You read what others had done, and you took the next step. You didn’t earn the knowledge for yourselves, so you don’t take any responsibility for it.” – Ian Malcolm

9. “Don’t you see the danger, John, inherent in what you’re doing here? Genetic power is the most awesome force the planet’s ever seen, but you wield it like a kid that’s found his dad’s gun.” – Ian Malcolm

11. “Ah, now eventually you do plan to have dinosaurs on your, on your dinosaur tour, right?” – Ian Malcolm

12. “She’s learning where she fits on the food chain, and I’m not sure you want her to figure that out.” – Owen Grady

14. “‘Ooh, ah. That’s how it always starts. But then later, there’s running and screaming.” – Ian Malcolm

18. “You’re well remembered to wash your hands before you eat anything.” – Ian Malcolm

20. “I bring scientists, you bring the rock star.” – John Hammond

21. “Objects in the mirror are closer than they appear.” – Alan Grant

22. “I don’t blame people for their mistakes, but I do ask that they pay for them.” – John Hammond

25. “That’ll be a first—man and dinosaur all die together.” – Ian Malcolm

27. “We’re gonna make a fortune with this place.” – Donald Gennaro

29. Robert Muldoon: “They’re lethal at eight months, and I do mean lethal. I’ve hunted most things that can hunt you, but the way these things move—.”

Alan Grant: “Fast for a biped?”

Robert Muldoon: “Cheetah speed. Fifty, sixty miles an hour if they ever got out into the open, and they’re astonishing jumpers.”

30. “That means they only eat vegetables, but for you, I think they’d make an exception.” – Tim Murphy

Jurassic Park Quotes That Zoom in on Experiments, Ecosystems, and Extinction

31. “Well, the question is, how can you know anything about an extinct ecosystem? And therefore, how could you ever assume that you can control it? I mean, you have plants in this building that are poisonous, you picked them because they look good, but these are aggressive living things that have no idea what century they’re in, and they’ll defend themselves, violently if necessary.” – Ellie Sattler

32. John Hammond: “If I was to create a flock of condors on this island, you wouldn’t have anything to say.”

Ian Malcolm: “No, hold on. This isn’t some species that was obliterated by deforestation, or the building of a dam. Dinosaurs had their shot, and nature selected them for extinction.”

33. “The world has just changed so radically, and we’re all running to catch up. I don’t want to jump to any conclusions but look—dinosaurs and man, two species separated by 65 million years of evolution have just been suddenly thrown back into the mix together. How can we possibly have the slightest idea what to expect?” – Alan Grant

35. “I can’t get Jurassic Park back online without Dennis Nedry.” – Arnold

36. “Remind me to thank John for a lovely weekend.” – Ian Malcolm

40. “And now I’m sitting here, by myself, talking to myself. That’s chaos theory.” – Ian Malcolm

41. “I don’t think you’re giving us our due credit. Our scientists have done things which nobody’s ever done before.” – John Hammond

42.“Look, we can discuss sexism in survival situations when I get back.” – Ellie Sattler

44. Ellie Sattler: “Should we chance moving him?”

45. “I’ve been present for the birth of every little creature on this island.” – John Hammond

46. “Gee, the lack of humility before nature that’s being displayed here, uh—staggers me.” – Ian Malcolm

47. “There. Look at this. See? See? I’m right again. Nobody could’ve predicted that Dr. Grant would suddenly, suddenly jump out of a moving vehicle.” – Ian Malcolm

48. “I simply don’t understand this Luddite attitude, especially from a scientist. I mean, how can we stand in the light of discovery, and not act?” – John Hammond

49. “No, no, no. We have no animatronics here. These are the real miracle workers of Jurassic Park.” – John Hammond

50. “Quiet, all of you! They’re approaching the Tyrannosaur paddock.” – Robert Muldoon

Tim Murphy: “A do-you-think-he-saurus. What do you call a blind dinosaur’s dog?”

53. John Hammond: “All major theme parks have delays. When they opened Disneyland in 1956, nothing worked!”

Ian Malcolm: “Yeah, but, John, if The Pirates of the Caribbean breaks down, the pirates don’t eat the tourists.”

54. “But again, how do you know they’re all female? Does somebody go out into the park and pull up the dinosaurs’ skirts?” – Ian Malcolm

Ian Malcolm: “Me? Oh, hell yeah, three. I love kids. Anything at all can and does happen. Same with wives, for that matter.”

More Jurassic Park Quotes for Those Who Read the Book

57. “The planet has survived everything, in its time. It will certainly survive us.” – Michael Crichton, Author

59.“Nobody is driven by abstractions like ‘seeking truth.” – Michael Crichton, Author

60. “Discovery, they believe, is inevitable. So they just try to do it first.” – Michael Crichton, Author

Have You Ever Imagined Living Alongside Dinosaurs?

Life is nothing without thrill and adventure, and when it comes to science, discovering something new is a dream come true. But, nature has a way of balancing out the world. If we mess with it, then we’d better be ready to face the consequences—just like what our favorite characters from Jurassic Park did.

In Jurassic Park, scientists finally made a breakthrough and brought dinosaurs back to life. But, the force of nature is not to be messed with. After all, ecological balance, once destroyed, can cause severe side effects for all living organisms.

Yes, the way to move forward is to be curious and explore. But, we should never forget to respect life and nature. Do not play with it just for amusement and fun.

With that, we hope this collection of the best quotes from Jurassic Park were able to teach you a thing or two about the world we live in. Feel free to reread this list whenever you need a sneak peek of life with these prehistoric creatures!

Did these quotes make you see life from a deeper perspective? Were we able to bring you back to some of your favorite Jurassic Park scenes? Let us know by leaving a comment below.