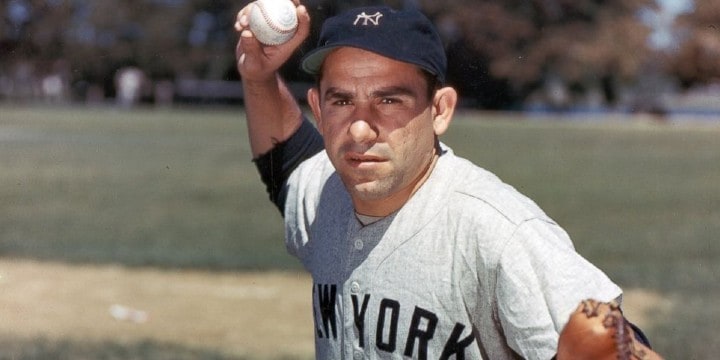 This collection of the best Yogi Berra quotes is a great way to start your day on a happy and positive note.

Many of us know Yogi Berra as one of the most famous baseball players who ever lived. Because of his many recognitions in the sport, he earned a spot in the Baseball Hall of Fame.

However, Yogi was not only famous for his contributions as one of the key players of the New York Yankees.

He was also loved and respected by family, friends, and the rest of the world because of what they call his “Yogi-isms.” These were a collection of his witty remarks on life, baseball, and everything in between.

So, if you’re curious about him, his career, and his thoughts on the world, then this collection is perfect for you.

Take note of your favorite sayings by one of America’s most celebrated baseball players!

And don’t forget to check out these baseball quotes and Roberto Clemente quotes.

1. “Nobody can be all smiley all the time, but having a good, positive attitude isn’t something to shrug off.”

9. “We made too many wrong mistakes.”

12. “That’s how I kept myself positive—by not getting all negative.”

Yogi Berra Quotes to Live By

13. “Always go to other people’s funerals. Otherwise, they won’t come to yours.”

18. “You’ve got to be very careful if you don’t know where you are going because you might not get there.”

19. “There are a lot of things in life you can’t control, but how you respond to things—that you can control.”

20. “Baseball is a game of confidence and overcoming failures and fears. That’s what life’s about too.”

22. “It’s tough to make predictions, especially about the future.”

Yogi Berra Quotes That Zoom in on Baseball

27. “The game is supposed to be fun. If you have a bad day, don’t worry about it. You can’t expect to get a hit every game.”

30. “What difference does a uniform make? You don’t hit with it.”

32. “I never blame myself when I’m not hitting. I just blame the bat and if it keeps up, I change bats. After all, if I know it isn’t my fault that I’m not hitting, how can I get mad at myself?”

33. “I’m a lucky guy and I’m happy to be with the Yankees. And I want to thank everyone for making this night necessary.”

35. “If the people don’t want to come out to the ballpark, nobody’s going to stop them.”

36. “But it don’t bother me. I never yet saw anybody hit the baseball with their face. Besides, I like to get kidded; that means they like me. When they stop kidding me, I’m in trouble.”

41. “Why buy good luggage? You only use it when you travel.”

43. “All pitchers are liars or crybabies.”

45. “We have a good time together, even when we’re not together.”

47. “Congratulations. I knew the record would stand until it was broken.”

48. “It was impossible to get a conversation going—everybody was talking too much.”

49. “He hits from both sides of the plate. He’s amphibious.”

51. “You better cut the pizza in four pieces because I’m not hungry enough to eat six.”

55. “In theory, there is no difference between theory and practice; in practice, there is.”

57. “I’m not going to buy my kids an encyclopedia. Let them walk to school like I did.”

58. “To say that I don’t have any worries or nerves is the opposite of the truth. I worry about not being able to get around on the fastball anymore, I worry about getting hurt and having to quit playing before my time.”

60. “I wish everybody had the drive he had. He never did anything wrong on the field. I’d never seen him dive for a ball, everything was a chest-high catch, and he never walked off the field.”

Did These Yogi Berra Quotes Make You View Life From a Lighter Perspective?

The ugly and dark sides of society make it hard for us to view life positively. Having people around us who try to bring us down doesn’t make it any easier for us to be carefree and happy in life. But, Yogi Berra remained positive, hopeful, and cheerful through all of that.

In a way, his demeanor helped inspire people across the globe to do the same. Though it all seemed natural to him, his witty lines and funny quips about life and baseball played a significant role in making other peoples’ days brighter and more bearable.

Through his “Yogi-isms” and baseball, he gave the world entertainment and a rope of hope to hold on to. So, read this list of Yogi Berra quotes whenever you need a boost. We’re sure it’ll help you take on whatever life throws at you!

What’s your favorite Yogi Berra quote? What other lessons did you learn from this collection? Share your thoughts in the comments section below.