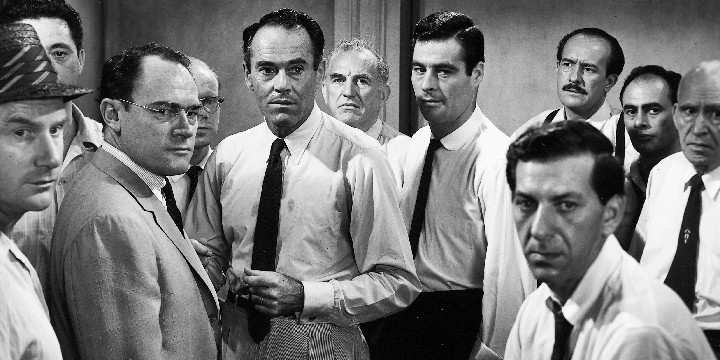 Let these 12 Angry Men quotes make you realize how society rots with racism, prejudice, and ignorance.

12 Angry Men is a 1957 courtroom drama movie based on a teleplay of the same name by Reginald Rose. It is a powerful story about a group of 12 men deciding the fate of an 18-year-old defendant.

Despite being released decades ago, the movie remains relevant because it uncovers the flaws of a jury system. Through it, we learn how our own subjective beliefs can change a single person’s life. Also, 12 Angry Men contains meaning and depth that provide us with nuggets of wisdom we can all reflect on.

So, don’t miss out by adding this to your must-read list. Here are our favorite quotes that will surely give you realizations about men and society!

And make sure to read these A Few Good Men quotes and Taxi Driver quotes.

1. “Facts may be colored by the personalities of the people who present them.” – Juror 11

3. “It’s very hard to keep personal prejudice out of a thing like this. And no matter where you run into it, prejudice obscures the truth.” – Juror 8

4. “It’s now your duty to sit down and try and separate the facts from the fancy.” – Judge

5. “There were 11 votes for ‘guilty.’ It’s not easy for me to raise my hand and send a boy off to die without talking about it first.” – Juror 8

6. “It takes a great deal of courage to stand alone even if you believe in something very strongly.” – Juror 9

7. “You come in here with your heart bleeding all over the floor about slum kids and injustice, but you make up these wild stories, and you’ve got some soft-hearted old ladies listening to you.” – Juror 3

8. “I’ll tell you something. The crime is being committed right in this room.” – Juror 10

10. “One man is dead. The life of another is at stake. I urge you to deliberate honestly and thoughtfully.” – Judge

15. “Nobody has to prove otherwise. The burden of proof is on the prosecution. The defendant doesn’t even have to open his mouth. That’s in the Constitution.” – Juror 8

16. “No. He wouldn’t really lie. But perhaps, he made himself believe he heard those words and recognized the boy’s face.” – Juror 9

17. “We’re not here to go into the reasons why slums are breeding grounds for criminals. They are. I know it.” – Juror 4

18. “Let me ask you this, do you really think the boy would shout out a thing like that so the whole neighborhood could hear him? I don’t think so. He’s much too bright for that.” – Juror 8

19. “But supposing he really did hear it. This phrase, how many times has each of us used it? Probably hundreds, ‘I could kill you for doing that, darling.’ We say it every day. It doesn’t mean we’re going to kill someone.” – Juror 8

20. Juror 3: “You’re talking about a matter of seconds! Nobody can be that accurate.”

Juror 8: “I think testimony that could put a boy into the electric chair should be that accurate.”

23. “I feel sorry for you. What it must feel like to want to pull the switch! Ever since you walked into this room, you’ve been acting like a self-appointed public avenger! You want to see this boy die because you personally want it, not because of the facts! You’re a sadist!” – Juror 8

24. “It’s hard to put into words. I just think he’s guilty. I thought it was obvious from the word, ‘go.’ Nobody proved otherwise.” – Juror 2

Juror 4: “I have a reasonable doubt.”

27. “Nine of us now seem to feel that the defendant is innocent, but we’re just gambling on probabilities. We may be wrong. We may be trying to return a guilty man to the community. No one can really know. But we have a reasonable doubt, and this is a safeguard that has enormous value in our system. No jury can declare a man guilty unless it’s sure. We nine can’t understand how you three are still so sure. Maybe you can tell us.” – Juror 8

28. “According to the testimony, the boy looks guilty. Maybe, he is. I sat there in court for six days, listening while the evidence built up. Everybody sounded so positive, you know, I began to get a peculiar feeling about this trial.” – Juror 8

29. “I don’t understand you, people! I mean all these picky little points you keep bringing up. They don’t mean nothing! You saw this kid just like I did. You’re not gonna tell me you believe that phony story about losing the knife and that business about being at the movies.” – Juror 10

31. “This is a quiet, frightened, insignificant old man who has been nothing all his life.” – Juror 9

32. “Look, let’s talk facts. These people are born to lie. Now, it’s the way they are, and no intelligent man is gonna tell me otherwise. They don’t know what the truth is. They are different. They act different.” – Juror 10

12 Angry Men Quotes to Learn More About the Justice System

33. “Listen, there are still 11 of us who think he’s guilty. You’re alone. What do you think you’re gonna accomplish? If you want to be stubborn and hang this jury, he’ll be tried again and found guilty, sure as he’s born.” – Juror 7

34. “Maybe, he didn’t bring it up because it would have meant bullying and badgering a helpless old man. You know that doesn’t sit well with a jury. Most lawyers avoid it if they can.” – Juror 8

37. “It’s a very awkward thing to stab down into the chest of someone who’s half a foot taller than you are.” – Juror 2

38. “Look, this boy’s been kicked around all his life. You know, living in a slum, his mother dead since he was nine. He spent a year and a half in an orphanage while his father served a jail term for forgery. That’s not a very good head start. He’s had a pretty terrible 16 years. I think, maybe, we owe him a few words. That’s all.” – Juror 8

39. “That’s old enough. He knifed his own father. Four inches into the chest. An innocent little 19-year-old kid. They proved it a dozen different ways.” – Juror 3

41. “Wait a minute, what are you trying to give us here? The phrase was ‘I’m gonna kill you.’ The kid yelled it at the top of his lungs. Don’t tell me he didn’t mean it! Anybody says a thing like that the way he said it. They mean it!” – Juror 3

More 12 Angry Men Quotes for a Better Understanding of Society

46. “Well, it’s not easy to stand alone against the ridicule of others. He gambled for support, and I gave it to him.” – Juror 9

49. “I used to play in a backyard that was filled with garbage. Maybe, it still smells on me.” – Juror 5

50. “What are you talkin’ to him like that for? Guy talks like that to an old man really oughta get stepped on, you know. You oughta have more respect, mister. If you say stuff like that to him again. I’m gonna lay you out.” – Juror 6

Did These 12 Angry Men Quotes Encourage You to Stand Up for Your Own Beliefs?

Often, we find ourselves being swayed by the opinions and beliefs of others, especially when we’re in groups. We even find ourselves being pressured to act against our integrity and core principles at times. This struggle between majority and self is what the movie zooms in on.

12 Angry Men exposes the conflict between consensus-building and being true to yourself. It is a realistic portrayal of how different people act on collective decision-making. Moreover, their heated conversations show their clashing morals and perspectives in life.

The same is true outside the reel; no matter how hard things get, we must still fight for our principles. We have to remember to have the courage to speak up despite the fear of shame and rejection.

Let these quotes inspire you to be brave and have the resolution to own up to your opinions. Keep the lessons you’ve learned from this collection in your mind, and remember to apply them in your life as you move forward.

Which 12 Angry Men quote is your favorite? Did you learn a lot from the collection? Comment below!