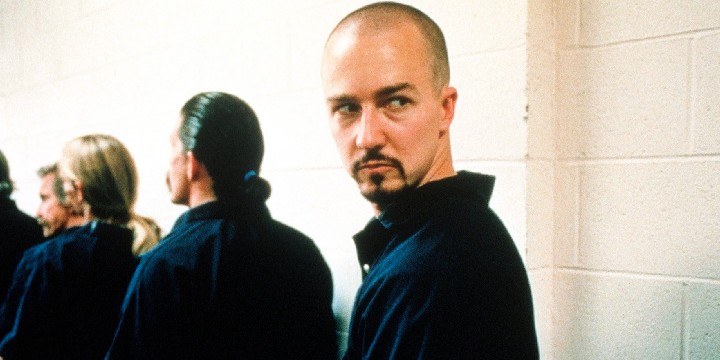 Our knowledge of history pushes us to act a certain way. However, history’s most notable influence is how we treat and interact with others. And, in American History X, we see how rampant discrimination is against people of color.

This issue is still present today, though it was considerably much worse in the years the movie was set. Derek grew up seeing the hate and violence Black people were being given. So, when two Black men provoked him, he killed them without hesitation.

In prison, Derek became friends with a Black man. His perspective on the world changed through his encounter with Lamont. And, when he got out, he wanted his brother to veer away from the life of hate he once lived.

American History X is a profound movie that will constantly have you reflecting on your choices. If you want to get a glimpse of what it has to offer, read on!

And don’t forget to check out these Blow quotes and Casino quotes.

Derek Vinyard: “I’m not. I’m lucky. I feel lucky because it’s wrong, Danny. It was wrong, and it was eating me up. It was going to kill me. And I kept asking myself all the time, how did I buy into this sh*t? It was because I was pissed off, and nothing I ever did ever took that feeling away. I killed two guys, Danny, I killed them. And it didn’t make me feel any different. It just got me more lost, and I’m tired of being pissed off, Danny. I’m just tired of it.”

2. “So I guess this is where I tell you what I learned—my conclusion, right? Well, my conclusion is: hate is baggage. Life’s too short to be pissed off all the time. It’s just not worth it. Derek says it’s always good to end a paper with a quote. He says someone else has already said it best. So if you can’t top it, steal from them and go out strong. So I picked a guy I thought you’d like. We are not enemies, but friends. We must not be enemies. Though passion may have strained, it must not break our bonds of affection. The mystic chords of memory will swell when again touched, as surely they will be, by the better angels of our nature.” – Danny Vinyard

3. “We’re so hung up on this notion that we have some obligation to help the struggling Black man, you know. Cut him some slack until he can overcome these historical injustices. It’s crap. I mean, Christ, Lincoln freed the slaves, like, what, 130 years ago. How long does it take to get your act together?” – Derek Vinyard

4. Dr. Bob Sweeney: “There was a moment when I used to blame everything and everyone for all the pain and suffering and vile things that happened to me, that I saw happen to my people. Used to blame everybody. Blamed White people, blamed society, blamed God. I didn’t get no answers ’cause I was asking the wrong questions. You have to ask the right questions.”

Dr. Bob Sweeney: “Has anything you’ve done made your life better?”

5. Danny Vinyard: “Look, Sweeney, did you bring me here to talk about Derek? Because what happened to him has nothing to do with me.”

Dr. Bob Sweeney: “Everything you do right now has something to do with Derek.”

6. “One in every three Black males is in some phase of the correctional system. Is that a coincidence, or do these people have, you know, like a racial commitment to crime?” – Derek Vinyard

8. “Alright, listen up. We need to open our eyes. There’s over two million illegal immigrants bending down in this state tonight. This state spent three billion dollars last year on services, on people who had no right to be here in the first place. Three billion dollars. Four hundred million just to lock up a bunch of illegal immigrant criminals who only got in this country because the f*cking INS decided it’s not worth the effort to screen for convicted felons.” – Derek Vinyard

Doris Vinyard: “He’s just a boy. Without a father.”

Murray: “Doris, you don’t know the world your children are living in.”

10. “Every night, thousands of these parasites stream across the border like some f*ckin’ piñata exploded.” – Derek Vinyard

14. “Don’t f*ck with me ’cause I’m the most dangerous man in this prison. You know why? ‘Cause I control the underwear.” – Lamont

15. “I think the street would kill you. Your rhetoric and your propaganda aren’t gonna save you out there.” – Dr. Bob Sweeney

16. “This racist propaganda, this ‘Mein Kampf’ psychobabble; he learned this nonsense, Murray, and he can unlearn it too.” – Dr. Bob Sweeney

17. Danny Vinyard: “He’s one of those proud-to-be nigger people. I hate those guys.”

Cameron Alexander: “Now wait a minute, Danny, he’s not proud. No, he’s a manipulative, self-righteous Uncle Tom who’s trying to make you feel guilty about writing about Adolf Hitler. Yeah, when some nigger or some spack writes about Martin Luther King or f*cking Caesar commie Chavez, he gets a pat on the head. You can see the hypocrisy in that, can’t you?”

18. “All the wrong people knew who I was anyways, so I figured I’m just gonna put up a flag and hope a friend sees it.” – Derek Vinyard

Derek Vinyard: “Right, my family, so you know what? I don’t give two sh*ts about you or anyone else or what they think. You’re not a part of it, and you never will be.”

American History X Quotes That Will Shift Your Worldview

Danny Vinyard: “I hate anyone that is a White Protestant.”

Danny Vinyard: “There is a burden to the advancement of the White race. Some of them are alright, I guess.”

22. Derek Vinyard: “Every problem in this country is race-related, not just crime. It’s like immigration, AIDS, and welfare—those are problems in them. The Black community, the Hispanic community, the Asian community, they’re not White problems.”

Reporter: “Derek, are those really issues that deal with poverty?”

Doris Vinyard: “I’m ashamed that you came out of my body!”

Derek Vinyard: “Yes, I do. You’ll be outta here in no time.”

Lamont: “C’mon man, it’s a piece of cake, a’ight? You just take it easy on the brothers, a’ight? The brothers!”

Cameron Alexander: “You made the fat kid a little nervous. He thinks the joint messed with your mind.”

Derek Vinyard: “It did.”

25. Derek Vinyard: “This country is becoming a haven for criminals, so what do you expect? You know, decent hard-working Americans like my dad are getting rubbed out by social parasites.”

26. Derek Vinyard: “We, as a society, grand cops a certain amount of authority to make those calls because we acknowledge that their job is difficult and dangerous! Very few people respect that and respect that authority.”

Derek Vinyard: “What? I didn’t say I respect the laws. I acknowledge a cop’s authority.”

Derek Vinyard: “Curtis, what are you doing? Weed is for niggers. You put that away right now. Have a little self-respect.”

Derek Vinyard: “Yeah, you know, I got this funny feeling.”

Derek Vinyard: “I’m thinking the only reason I’m getting outta here in one piece is you.”

29. Cameron Alexander: “This is stupid. Go cool off, get laid, do something, and come back when you’re ready to talk.”

Derek Vinyard: “Yeah, but it really doesn’t matter if I do, does it? Because you got a whole crop already lined up, you f*ckin’ chicken hawk!”

Derek Vinyard: “You prey on people, Cam. I lost three years of my life for your f*ckin’ phony cause, but I’m onto you now, you f*ckin’ snake.”

Cameron Alexander: “Hey, watch it, Derek, be careful. Remember where you are. This isn’t some f*ckin’ country club where you can waltz in and outta here!”

Derek Vinyard: “Shut up! Shut the f*ck up! I came here for one reason, to tell you that I’m out. Out! And Danny’s out, too. And if you come near my family again, I’m gonna f*cking kill you.”

Cameron Alexander: “Well, excuse me, but f*ck you, Derek. You can’t come in here barking threats at me. Look, you can do whatever you want, but Danny’s a good kid. He’s not some whiny pussy like you. He needs my help, and I’m gonna give it to him.”

Derek Vinyard: “If you come near Danny again, I will feed you your f*cking heart, Cameron.”

Cameron Alexander: “I won’t have to. He’ll come to me. I’m more important to him now than you’ll ever be.”

30. Derek Vinyard: “Nigger, you just f*cked with the wrong bull. You should’ve learned your lesson on the f*ckin’ basketball court. But you f*ckin’ monkey’s never got the message. My father gave me that truck, motherf*cker! You ever shoot at a fireman? You come here and shoot at my family? I’m gonna teach you a real lesson now, motherf*cker. Put your f*ckin’ mouth on the curb.”

Derek Vinyard: “Put it on the curb right now!”

How Did This List of Quotes Influence Your Worldview?

Hate is something that can make anything crumble. For Derek, hate drove him to commit an irreversible mistake.

However, we must understand that our prejudice toward people of other cultures, colors, or religions has no basis other than we think they’re different from us. Physically, yes, they might be. But, so what?

We’re all unique in our own ways. If you get to the very core of being human and if you get to one’s soul, you’ll realize that we’re all the same in the end. So, why foster hate in your heart?

This is something Derek learned the hard way when he was in prison. Not only that but he was also attacked by people whom he thought were the same as him. So, before it’s too late, we must all wake up and free ourselves from a hate-filled life!

Nothing good will ever come out of it, so don’t make life harder than it is for you and others. Stop acting based on prejudice; open your hearts to others instead! Learn from Derek Vinyard’s mistakes, and let yourself dream of a beautiful world free from discrimination and inequality!