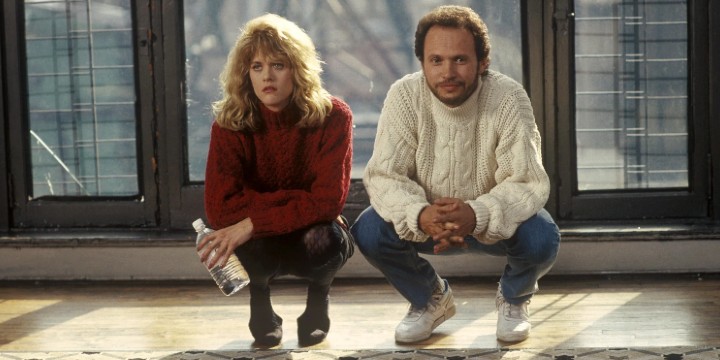 Here are the best When Harry Met Sally quotes that will make you re-watch this classic comedy film about love.

It tells the story from the first meeting of Harry and Sally up to their decade long encounters in New York City.

The film gives a fresh take on romance with its light-hearted humor and realistic storyline.

So, if you want to know more about this movie and its lessons, don’t miss out on this collection!

And make sure to read these Titanic quotes and The Sandlot quotes.

1. “You look like a normal person, but actually, you are the angel of death.” – Sally Albright

4. “Nothing. It’s just that all men are sure it never happened to them, and all women at one time or other have done it, so you do the math.” – Sally Albright

7. “Everybody, could I have your attention, please? I’d like to propose a toast to Harry and Sally. To Harry and Sally, if Marie or I had found either of them remotely attractive, we would not be here today.” – Jess

9. “You know, you may be the first attractive woman I’ve not wanted to sleep with in my entire life.” – Harry Burns

10. “As Harry puts it, men and women can never be friends because ‘the sex part always gets in the way.'” – Nora Ephron

11. “It is so nice when you can sit with someone and not have to talk.” – Harry Burns

12. “How much worse can it get than finishing dinner, having him reach over, pull a hair out of my head, and start flossing with it at the table?” – Sally Albright

13. “I’m saying that the right man for you might be out there right now, and if you don’t grab him, someone else will, and you’ll have to spend the rest of your life knowing that someone else is married to your husband.” – Marie

14. “No man can be friends with a woman he finds attractive.” – Harry Burns

15. “Harry, you’re going to have to try and find a way of not expressing every feeling that you have, every moment that you have them.” – Sally Albright

Related: All the Bright Places Quotes

16. “Waiter, there is too much pepper on my paprikash.” – Sally Albright

17. “Harry, you might not believe this, but I never considered not sleeping with you a sacrifice.” – Sally Albright

19. “I want you to know that I will never want that wagon wheel coffee table.” – Marie

23. “Six years later, you find yourself singing Surrey with a fringe, on top, in front of Ira!” – Harry Burns

25. “Had my dream again where I’m making love, and the Olympic judges are watching. I’d nailed the compulsories, so this is it, the finals. I got a 9.8 from the Canadians, a perfect 10 from the Americans, and my mother, disguised as an East German judge, gave me a 5.6. Must have been the dismount.” – Harry Burns

26. “Would you like to have dinner? Just friends.” – Harry Burns

28. “I have just as much of a dark side as the next person.” – Sally Albright

29. “Sure. Why don’t you have a dark side? No, you’re probably one of those cheerful people who dot their eyes with little hearts.” – Harry Burns

30. “You know, I have a theory that hieroglyphics are just an ancient comic strip about a character named Sphinxy.” – Harry Burns

31. “Right now, everything is great, everyone is happy, everyone is in love, and that is wonderful. But you gotta know that sooner or later you’re gonna be screaming at each other about who’s gonna get this dish.” – Harry Burns

33. “Why can’t we get past this? I mean, are we gonna carry this thing around forever?” – Harry Burns

34. “You see? That is just like you, Harry. You say things like that, and you make it impossible for me to hate you. And I hate you, Harry, I really hate you. I hate you.” – Sally Albright

35. “Someone is staring at you in personal growth.” – Marie

37. “What I’m saying is—and this is not a come-on in any way, shape, or form—is that men and women can’t be friends because the sex part always gets in the way.” – Harry Burns

40. “You say I’m having sex with these men without my knowledge?” – Sally Albright

What Lessons Did You Learn From When Harry Met Sally?

You can never run out of life lessons from Harry and Sally’s story. Their growth as individuals and as people inside the relationship teaches us a lot about the realities of life.

It is an uncommon film that diverts from the passionate young love we see in fairytales and films. Instead, it focused on the realistic dynamics of an adult relationship.

Harry and Sally’s experiences and growth are things we can always look up to. After all, we don’t have much choice but to move on from our losses and take a step forward.

Have you watched When Harry Met Sally? What lines are your personal favorites? Let us know in the comments below.