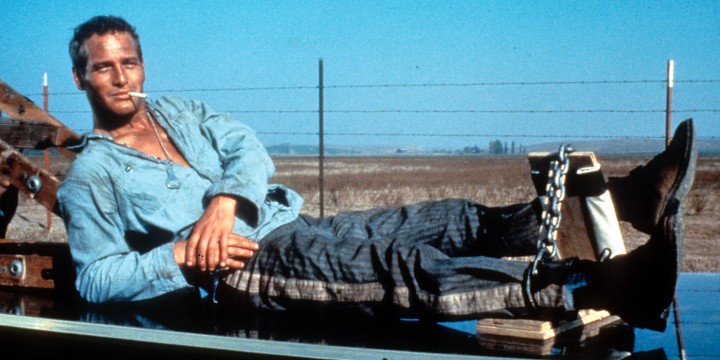 If you are a fan of classic films, you will surely enjoy this collection of 80 Cool Hand Luke quotes.

The story is  about the life of a prisoner, Lucas “Luke” Jackson, who by his wits and humor, has won the interest and respect of his fellow prisoners.

The film also shows Luke’s love for his mother as he attempted to escape prison multiple times just to see her for the last time.

Some critics say that the film shows opposition for the war during that time.

Luke’s engaging character and appealing charisma has made the film a blockbuster hit.

So sit back and relax as we go back in time. You will certainly be entertained by the most iconic quotes from one of the best movies in history.

And don’t forget to check out these Joe Dirt quotes and Nacho Libre quotes.

2. “What we’ve got here is failure to communicate. Some men, you just can’t reach. So you get what we had here last week, which is the way he wants it. Well, he gets it. I don’t like it any more than you men.” – Captain

5. “You know, sometimes, I wished people was like dogs, Luke. Comes a time, a day like, when the bitch just don’t recognize the pups no more, so she don’t have no hopes nor love to give her pain. She just don’t give a damn.” – Arletta

6. “He was smiling. That’s right. You know, that, that Luke, that smile of his. He had it on his face right to the very end. Hell, if they didn’t know it ‘fore, they could tell right then that they weren’t a-gonna beat him, that old Luke smile. Oh, Luke. He was some boy, Cool Hand Luke.” – Dragline

7. “Well, Arletta, things are just never the way they seem, you know that. Sometimes a man just has to go his own way.” – Luke

8. “John-boy, lemme tell you something. You know, them chains ain’t medals. You get ’em for making mistakes. And you make a bad enough mistake, and then you gotta deal with the man. And he is one rough old boy.” – Luke

9. “Oh boy, she knows exactly what she’s doing. She’s driving us crazy, and loving every minute of it!” – Luke

10. “Boy, you’re new meat. You’re gonna have to shape up fast and hard for this gang. We got rules here. In order to learn ’em, you gotta do more work with your ears than with your mouth.” – Dragline

17. “Anything so innocent and built like that just gotta be named Lucille.” – Dragline

18. “You gonna get used to wearin’ them chains after a while, Luke. Don’t you never stop listenin’ to them clinking. ‘Cause they gonna remind you of what I been saying, for your own good.” – Captain

22. “Nothin’, a handful of nothin’. You stupid mullet head, he beat you with nothin’, just like today, when he kept comin’ back at me—with nothin’.” – Dragline

32. “Anybody here? Hey, Old Man, You home tonight? Can You spare a minute? It’s about time we had a little talk. I know I’m a pretty evil fellow—killed people in the war, and got drunk, and chewed up municipal property and the like. I know I got no call to ask for much, but even so, You’ve got to admit You ain’t dealt me no cards in a long time. It’s beginning to look like You got things fixed so I can’t ever win out. Inside, outside, all of them—rules, and regulations, and bosses. You made me like I am. Now, just where am I supposed to fit in? Old Man, I gotta tell You, I started out pretty strong and fast, but it’s beginning to get to me. When does it end? What do You got in mind for me? What do I do now? Right. All right.” – Luke

33. “Are you still believin’ in that big bearded Boss up there? You think He’s watchin’ us?” – Luke

35. “My Lord, whatever I done, don’t strike me blind for another couple of minutes.” – Dragline

42. Dragline: “Why you got to go and say fifty eggs for? Why not thirty-five or thirty-nine?”

Luke: “I thought it was a nice round number.”

43. “Alright, stand back, you pedestrians, this ain’t no automobile accident.” – Dragline

46. “You hang on in there, Luke. You hang on. There’s gonna be some world-shakin’, Luke. We gonna send you a postcard.” – Dragline

49. “You tryin’ to say something? You got a flappin’ mouth. One of these days, I’m gonna have to flap me up some dust with it.” – Dragline

50. “Well, lookie here. I knew they’d get you. Them chains and a bonus of a couple of years, your running days are over forever, boy. Hell, I’d like to see you try to run again. You know, you getting so you smell so bad I can track you myself.” – Dog Boy

52. “Shut your mouth about my Lucille.” – Dragline

53. “Luke? You all right? They got us, boy. They’re out there, thicker than flies. Bosses, dogs, sheriffs, more guns than I’ve ever seen in my life. You ain’t got a chance. They caught up with me right after we split up. And they was aimin’ to kill ya. But I fixed it. I got ’em to promise if you give up peaceful, they won’t whip ya this time. Luke, you gotta listen to me. All ya got to do is give up nice and quiet. Just play cool.” – Dragline

55. “When it comes to the law, nothin’ is understood. I’m his official egg-peeler. That’s the law!” – Dragline

56. “He ain’t in the box because of the joke played on him. He back-sassed a free man. They got their rules.” – Dragline

57. “We ain’t got nothin’ to do with that. Would probably have happened to him sooner or later anyway, a complainer like him. He gotta learn the rules the same as anybody else.” – Dragline

59. “You got a grudge against another man, you fight him Saturday afternoon. Any man playing grabass or fightin’ in the building spends a night in the box.” – Carr

61. “Them clothes got laundry numbers on them. You remember your number and always wear the ones that has your number. Any man forgets his number spends a night in the box.” –  Carr

62. “These here, spoons you keep with you. Any man loses his spoon spends a night in the box.” – Carr

64. “First bell’s at five minutes of eight when you will get in your bunk. Last bell is at eight. Any man not in his bunk at eight spends the night in the box.” – Carr

66. “You got questions, you come to me. I’m Carr, the floorwalker. I’m responsible for order in here.” – Carr

70. “When a man’s mother dies, and uh, he gets to thinking about her funeral and paying respects, before he knows it, his mind ain’t right. He’s got rabbit in his blood and he runs.” – Captain

71. “I always hoped to see you well-fixed. Have me a crop of grand kids to fuss around with.” – Arletta

80. “Why, we always thought you was strong enough to carry it. Was we wrong?” – Arletta

90. “You was eyeballin’, Luke. You can’t gitcha mind on them weeds if yer eyeballing.” – Boss Paul.

Do You Agree That Luke is Cool?

Cool Hand Luke’s cast have won and been nominated in some of the most prestigious award-giving bodies like the Academy Awards. The film has placed the names of its cast in history. It was considered to set the standards for the film industry during that era.

Government institutions also preserved the film and considered it to be a significant part of American culture and history. Also, it’s most iconic line, “What we’ve got here is failure to communicate.” has been placed in the top American movie quotes of all time.

Cool Hand Luke teaches us to enjoy life, even amidst trials and struggles. A good outlook in life is really essential to a lifetime of happiness. Having a little bit of fun does not hurt.

Did we miss any of your favorite lines? Which quote did you like the most? Hit us up in the comments section below.