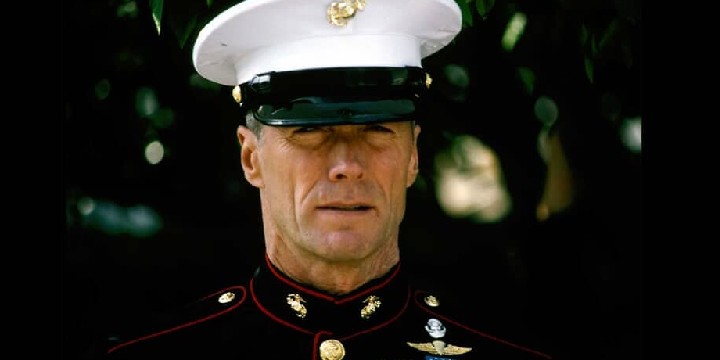 Whether you’re a fan of Clint Eastwood or not, these Heartbreak Ridge quotes will definitely leave you wanting more!

Clint Eastwood starred in, produced, and directed Heartbreak Ridge in 1986. He plays an aging Gunnery Sergeant, Tom Highway, who returns to his old unit to lead them. There, he takes over a group of undisciplined Marines and rebuilds them into a real fighting platoon.

Here are some of the best quotes from the movie that’ll teach you about discipline, leadership, and teamwork. We’re positive that the quotes will transform you into a person capable of leading your life in the best way possible.

Read the quotes below to learn more about the movie and his character!

And don’t forget to check out these Saving Private Ryan quotes and Apocalypse Now quotes.

1. “Why don’t you just sit there and bleed awhile before you taste some real pain.” – Tom Highway

3. “I’m gonna rip off your head and sh*t down your neck.” – Swede Johanson

6. “Well, I ask for Marines, the division sends me relics. The men in the recon platoon are less than highly motivated, to say the least. I want those men in shape.” – Major Powers

7. “Take your post. The Marines are looking for a few good men. Unfortunately, you ain’t it. We will blaze a path into battle for others to follow.” – Tom Highway

8. “This is the new Marine Corps. The new breed. Characters like you are an anachronism. You should be sealed in a case that reads break glass only in the event of war. Got no tolerance for you old timers who think that you know it better and can have it all your own way. Understand?” – Major Powers

10. “Marines are fighting men, sir. They shouldn’t be sitting around on their sorry *sses filling out request forms for the equipment they should already have.” – Tom Highway

11. “Well then, stick to it because you’re a walking cluster f*ck as an infantry officer.” – Colonel Meyers

12. “If your brain was half as smart as your mouth, skunk stool, you’d be a frickin’ 20-star general by now.” – Major Choozoo

13. “Ain’t gonna be so smart with your balls stuffed in your mouth, jarhead!” – Jail Binger

Heartbreak Ridge Quotes for Everyone Who Loves the Movie

16. “What the f*ck good are you doing back there? Without any cover fire I get my *ss blown off! While you guys are sitting there pumpin’ the neighbor’s dog we get every swinging’ dick in this platoon killed!” – Tom Highway

17. “Just because there’s no war going on does not give you the right to start one every time you get drunk.” – Judge Zane

19. “You know one of these days you’ll be puking blood in some alley and you’re going to look up and see me standing there!” – Reese

20. “Well, well, well, well. I’m here to tell you that life as you knew it has ended. You all may as well go into town tonight. You may as well laugh and make fools out of yourselves. Rub your pathetic little peckers against your honies or stick it in a knothole in the fence but whatever it is, get rid of it.” – Tom Highway

21. “Well, you disobeyed an order. I told you to stay in contact and not take this hill without me. Damn it! Get on your feet, Highway!” – Major Powers

23. “They’re not your men, you self-centered, egocentric, son of a b*tch! They’re the United States Marine Corps men! The Second Division’s men! The Eighth Marine Regiment’s men! In other words, they’re my men and so are you, get it?” – Major Powers

24. “You’re a dead Marine! You just got your legs blown off, and we have to send a search party out for your testicles.” – Tom Highway

25. “Who the hell do you think you are? Pissin’ on my squad car. You think you can break our rules and then just walk away? Or are we supposed to wet our pants over your dress blues and your g*ddamn colored ribbons? Take a look at that file of yours sometime, hero.” – Reese

26. “Just because we’re holding hands doesn’t mean we’ll be taking warm showers together until the wee hours of the morning.” – Tom Highway

27. “My men are ready to fight to the death to protect our country, sir.” – Major Powers

28. “We move swiftly. We move silently. We move deadly. Only one shake of those wangs ladies. Anymore than that constitutes pleasure and we’re not in that business. Sleep well, Mr. Jones?” – Tom Highway

29. “We’re going to approach this exercise in an orderly proficient manner, Sergeant Major. I want each round of ammunition counted and returned in the exact condition in which it was received.” – Major Powers

30. “I want this battalion to be the class of the division. I expect my non-commissioned officers to lead by example. Public fighting and insubordination to civilian authority are not what I call good standards!” – Major Powers

Did You Learn Anything New About Patience and Teamwork From Our Collection?

In the film, Tom Highway takes command of a disorganized and uninspired platoon. His main goal was to shape the platoon into a fighting unit. In the process, he and the group went through many challenges that improved them individually and as a team.

This movie indeed provides us with a lesson that can help us live a better and more productive life. Remember that there is no magic pill for getting better. The best way to do it is to work hard and face every challenge ahead.

Heartbreak Ridge and its characters remind us that it’s never too late to change and improve ourselves for the better. We have total control over our lives, and if we just will it, believe in ourselves, and work hard, we’re sure to overcome any challenge!

So, did we miss any more good quotes from the movie? Which are your favorites? Please, leave a comment below.