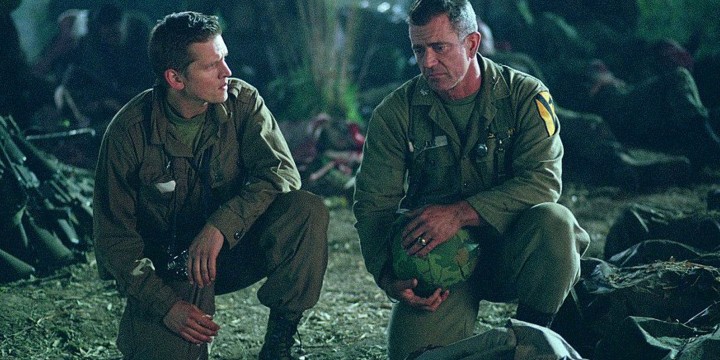 Let these We Were Soldiers quotes inspire you to be a better leader, believe in yourself, and be brave.

We Were Soldiers is a powerful and gritty war film written and directed by Randall Wallace. It depicts the relationship between the human cost of battle, strategy, and good leadership.

There’s no doubt you’ll learn a thing or two about life and how to face the challenges it throws at you from the characters! Find out more about this film and the lessons embedded in it by reading our list of quotes below.

And don’t forget to check out these Saving Private Ryan quotes and Full Metal Jacket quotes.

Best We Were Soldiers Quotes

1. “We who have seen war, will never stop seeing it. In the silence of the night, we will always hear the screams. So this is our story, for we were soldiers once, and young.” – Joe Galloway

2. “Some had families waiting. For others, their only family would be the men they bled beside. There were no bands, no flags, no honor guards to welcome them home. They went to war because their country ordered them to. But in the end, they fought not for their country or their flag, they fought for each other.” – Joe Galloway

3. “A leader must remain cool and calm. And second, he must learn to ignore explosions—the heat and dust, the screams of the wounded. This is normal on a battlefield. Normal!” – Lt. Col. Hal Moore

4. “To follow your instincts and to inspire your men, by your example, you have to be with ’em. Where the metal meets the meat.” – Lt. Col. Hal Moore

We Were Soldiers Quotes for Those on the Battlefield

8. “Tomorrow will get worse. If they make it to tomorrow.” – Maj. Bruce Crandall

9. “They attack us; no casualties. They retreat into the mountains and, naturally, we follow them. Smell like an ambush to you?” – Lt. Col. Hal Moore

10. “Pass this along; tell your men to fire three shots at anything that looks suspicious, on my order.” – Lt. Col. Hal Moore

11. “Now, the point here is that they fought as a family. Take care of your men. Teach them to take care of each other. ‘Cause when this starts—each other is all we’re gonna have.” – Lt. Col. Hal Moore

We Were Soldiers Quotes That Show the Characters’ Religious Beliefs

12. “I can’t promise you that I will bring you all home alive. But this I swear, before you and before Almighty God, that when we go into battle, I will be the first to set foot on the field, and I will be the last to step off, and I will leave no one behind. Dead or alive, we will all come home together. So help me, God.” – Lt. Col. Hal Moore

13. “We helped build a school for orphans. They were orphans because the warlord across the border didn’t like their tribe. I know that God has a plan for me, I just hope it’s to help protect orphans, not make any.” – Lt. Jack Geoghegan

14. “Our Father in Heaven, before we go into battle, every soldier among us will approach you each in his own way. Our enemies too, according to their own understanding, will ask for protection and for victory. And so, we bow before your infinite wisdom. We offer our prayers as best we can. I pray you watch over the young Jack Geoghegan. That I lead into battle. You use me as your instrument in this awful hell of war to watch over them. Especially if they’re men like this one beside me, deserving of a future in your blessing and goodwill. Amen.” – Lt. Col. Hal Moore

Interesting We Were Soldiers Quotes to Learn More About War

15. “To save innocent and vulnerable people by any means is not called a ‘war’ between two or more countries, it’s called a genuine and good cause to be there.” – Maj. Bruce Crandall

16. “Americans did not lose a war, they did not surrender, they showed and left an example for other countries to reach for those in need, any day, anytime, anywhere in any circumstances, despite having any faith. That’s the cause. A reason to live.” – Maj. Bruce Crandall

Lt. Col. Hal Moore: “War is something that shouldn’t happen but it does. It’s when one country tries to take the life of another country. And then soldiers like your daddy—it’s my job to go over there and stop them.”

Funny We Were Soldiers Quotes That’ll Uplift Your Mood

Sgt. Maj. Basil Plumley: “What are you a f*cking weatherman now?”

Did the Quotes Make You See War in a Different Light?

We Were Soldiers tells the story of a dedicated commander as he prepares to lead young men into the war’s first major ground battle. Because of how great the storytelling went, we can see the soldiers’ bravery depicted in every battle they face.

This film delves into every aspect of a soldier’s life, more than just that of the battlefield. It discusses family, relationships, peer pressure, and self-awareness. Consider how terrifying their situation would be during a war, and you’ll see why they deserve our respect and admiration.

Through We Were Soldiers, we can learn the importance of discipline, unity, and perseverance. It also tackles religion and faith in God. Remember that if we keep the faith and act with honor, He will do the rest.

Life as a soldier is indeed challenging and full of bloodshed. However, we can sleep peacefully at night and enjoy living our ordinary lives every day because of them. So, let’s all honor and respect our soldiers, and may we face life’s adversities with the same fighting spirit as them!

So, which quotes are your favorites? Please, leave a comment below.