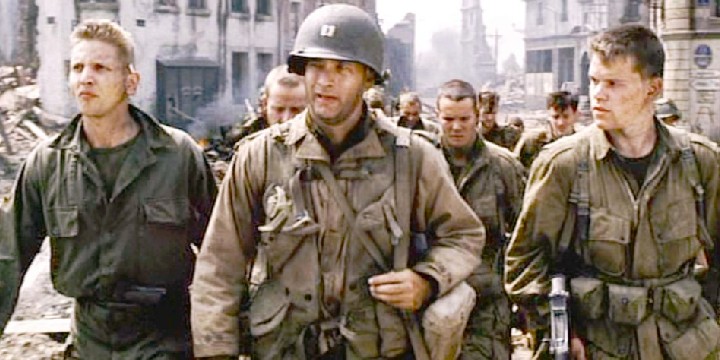 These Saving Private Ryan quotes will make you recognize the extraordinary acts soldiers go through to protect their fellows.

Saving Private Ryan is a film released in 1998 about the search for Private first class James Francis Ryan. Until now, the movie is a classic because of its realistic portrayal of war. This is also why it is the highest-grossing film of 1998 and is one of the greatest war films of all time.

So, get ready to read these heartwarming and inspiring lines from the film! We’ve picked the best quotes from Saving Private Ryan just for you, so don’t miss out by checking out our entire collection below.

And make sure to check out these Heartbreak Ridge quotes and The Shawshank Redemption quotes.

1. “You can tell her that when you found me, I was with the only brothers I had left. And that there was no way I was deserting them. I think she’d understand that.” – Private Ryan

2. “I just know that every man I kill, the farther away from home I feel.” – Captain Miller

3. “Every day, I think about what you said to me that day on the bridge. I tried to live my life the best that I could. I hope that was enough. I hope that, at least in your eyes, I’ve earned what all of you have done for me.” – Private Ryan

4. “Someday, we might look back on this and decide that saving Private Ryan was the one decent thing we were able to pull out of this whole godawful, shitty mess.” – Sergeant Horvath

5. “Why do I deserve to go? Why not any of these guys? They all fought just as hard.” – Private Ryan

6. “What’s the saying? If God’s on our side, who the hell could be on theirs?” – Private Reiben

7. “War educates the senses, calls into action the will, perfects the physical constitution, brings men into such swift and close collision in critical moments that man measures man.” – Corporal Upham

8. “Blessed be the Lord my strength, which teaches my hands to war, and my fingers to fight.” – Private Jackson

Saving Private Ryan Quotes That Will Warm Your Heart

9. “That boy is alive. We are gonna send somebody to find him. And we are gonna get him the hell outta there!” – General George C. Marshall

11. “If going to Ramelle, and finding him so he can go home, if that earns me the right to get back to my wife, well then, that’s my mission.” – Captain Miller

12. Captain Miller: “You see, when, when you end up killing one of your men, you see, you tell yourself it happened so you could save the lives of 2 or 3 or 10 others. Maybe a hundred others. Do you know how many men I’ve lost under my command?”

Sergeant Horvath: “How many?”

Captain Miller: “Ninety-four. But that means I’ve saved the lives of 10 times that many, doesn’t it? Maybe even 20, right? Twenty times as many? And that’s how simple it is. That’s how you, that’s how you rationalize making the choice between the mission and the man.”

15. “Well, when I think of home, I think of something specific. I think of my, my hammock in the backyard or my wife pruning the rose bushes in a pair of my old work gloves.” – Captain Miller

Saving Private Ryan Quotes for the Soldiers at Heart

16. “Well, it seems to me, sir, that God gave me a special gift, made me a fine instrument of warfare.” – Private Jackson

17. “Keep the sand out of your weapons. Keep those actions clear. I’ll see you on the beach.” – Captain Miller

20. “Oh my God, I trust in thee. Let me not be ashamed. Let not my enemies triumph over me.” – Private Jackson

21. “We’re not here to do the decent thing. We’re here to follow f*cking orders!” – Captain Miller

22. “Sergeant, we have crossed some strange boundary here. The world has taken a turn for the surreal.” – Captain Miller

23. “Theirs not to reason why, theirs but to do and die.” – Corporal Upham

25. “When was the last time you felt good about anything?” – Captain Miller

26. “Sometimes I wonder if I’ve changed so much that my wife is even going to recognize me, whenever it is that I get back to her. And how I’ll ever be able to tell her about days like today.” – Captain Miller

Captain Miller: “All we can do here is die.”

28. “I can’t see my brothers’ faces. And I’ve been trying, and I can’t see their faces at all. Has that ever happened to you?” – Private Ryan

30. “You wanna explain the math of this to me? I mean, where’s the sense of risking the lives of the eight of us to save one guy?” – Private Reiben

31. Captain Miller: “Your brothers were killed in combat.”

Private Ryan: “Which, which ones?”

Captain Miller: “All of them.”

32. “What the f*ck is that supposed to mean, Corporal, huh? We’re all supposed to die, is that it?” – Private Mellish

33. “My dear, Mrs. Ryan, it’s with the most profound sense of joy that I write to inform you, your son, Private James Ryan, is well and, at this very moment, on his way home from European battlefields.” – General George C. Marshall

Private Ryan: “What were their names?”

35. Private Ryan: “That was the last night the four of us were together. That was two years ago. Tell me about your wife and those rose bushes?”

Captain Miller: “No, no, that one I save just for me.”

More Saving Private Ryan Quotes for Everyone Who Watched the Movie

36. “It’s like finding a needle in a stack of needles.” – Captain Miller

37. “F*cked up beyond all recognition.” – Private Mellish

Captain Miller: “You’re going home. Our orders are to bring you back.”

39. “Please, I like America! Fancy schmancy! What a cinch! Go fly a kite! Cat got your tongue! Hill of beans! Betty Boop, what a dish. Betty Grable, nice gams.” – Steamboat Willie

40. “He better be worth it. He better go home and cure a disease, or invent a longer-lasting light bulb.” – Captain Miller

How Did These Saving Private Ryan Quotes Change Your Views on Life?

The military has been the protector of the citizens for years. They sacrifice their lives so we can live peacefully and enjoy the safety we have in our sleep. However, people often take our soldiers for granted and forget to honor their deeds for the country.

Saving Private Ryan is a reminder of the extraordinary acts that our military does. It urges us to uphold honor and decency in everything we do. But, most of all, the film teaches us to have a sense of collectivism with other people.

Having genuine care for your community is one of the most important things to learn in life. With that, we hope these quotes were able to help you realize the value of selflessness and empathy in forging connections.

Which Saving Private Ryan quote is your favorite? Do you have more quotes to add? Leave a comment below.