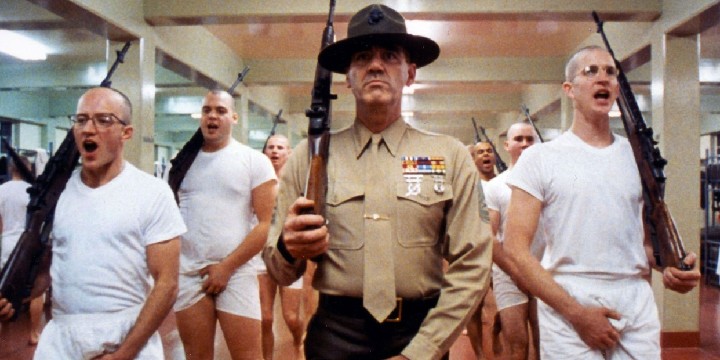 These Full Metal Jacket quotes will surely strengthen your endurance, perseverance, and determination.

Full Metal Jacket is known for its sarcastic and rather dark humor. It follows a group of aspiring young men as they go through basic training to become Marines and, eventually, soldiers in the Vietnam War. It’s gritty and shows you the extreme measures our military has to go through to be fit for battle.

As it is, the military teaches us many values we can apply in life. So, what more a movie that’s goal is to show us the intense and extensive training our military has to go through? If you’re curious to know more about it, make sure you read through to the end!

And don’t forget to check out these We Were Soldiers quotes and Heartbreak Ridge quotes.

1. “These are great days we’re living, bros. We are jolly green giants, walking the Earth—with guns. These people we wasted here today are the finest human beings we will ever know. After we rotate back to the world, we’re gonna miss not having anyone around that’s worth shooting.” – Crazy Earl

2. “Son, all I’ve ever asked of my Marines is that they obey my orders as they would the word of God. We are here to help the Vietnamese, because inside every gook, there is an American trying to get out. It’s a hardball world, son. We’ve just got to keep our heads until this peace craze blows over.” – Pogue Colonel

3. “This is my rifle. There are many others like it, but this one is mine. My rifle is my best friend. It is my life.” – Private Joker

5. “The dead know only one thing: it is better to be alive.” – Private Joker

Full Metal Jacket Quotes to Tell You More About the Marines

6. “The deadliest weapon in the world is a Marine and his rifle—your rifle is only a tool. It is a hard heart that kills. If your killer instincts are not clean and strong you will hesitate at the moment of truth. You will not kill. You will become dead Marines and then you will be in a world of sh*t because Marines are not allowed to die without permission.” – Gunnery Sgt. Hartman

7. “God has a hard-on for Marines because we kill everything we see! He plays His games, we play ours! To show our appreciation for so much power, we keep heaven packed with fresh souls! God was here before the Marine Corps!” – Gunnery Sgt. Hartman

9. “Today, you are Marines. You’re part of a brotherhood. From now on until the day you die, wherever you are, every Marine is your brother. Most of you will go to Vietnam. Some of you will not come back. But always remember this: Marines die. That’s what we’re here for. But the Marine Corps lives forever. And that means you live forever.” – Gunnery Sgt. Hartman

10. “In the Marines! Outstanding! Those individuals showed what one motivated Marine and his rifle can do! And before you ladies leave my island, you will be able to do the same thing!” – Gunnery Sgt. Hartman

Full Metal Jacket Quotes That Will Provoke You

11. “Bullshit. It looks to me like the best part of you ran down the crack of your mama’s *ss and ended up as a brown stain on the mattress. I think you’ve been cheated!” – Gunnery Sgt. Hartman

12. “What is your major malfunction, n*mbn*ts? Didn’t mommy and daddy show you enough attention when you were a child?” – Gunnery Sgt. Hartman

13. “I bet you’re the kind of guy that would f*ck a person in the *ss and not even have the g*dd*mn common courtesy to give him a reach-around. I’ll be watching you.” – Gunnery Sgt. Hartman

14. “You write ‘born to kill’ on your helmet and you wear a peace button. What’s that supposed to be, some kind of sick joke?” – Pogue Colonel

17. “If it wasn’t for dickheads like you, there wouldn’t be any thievery in this world, would there?” – Gunnery Sgt. Hartman

18. “You’d better get your head and your *ss wired together, or I will take a giant sh*t on you.” – Pogue Colonel

Interesting Full Metal Jacket Quotes for All the Fans

19. “You’re so ugly you could be a modern art masterpiece!” – Gunnery Sgt. Hartman

21. “I mean, we’re getting killed for these people and they don’t even appreciate it. They think it’s a big joke.” – Donlon

25. “Now, you listen to me, Private Pyle. And you listen well. I want that weapon, and I want it now. You will place that rifle on the deck at your feet, and step back away from it.” – Gunnery Sgt. Hartman

26. “Holy dog sh*t! Texas? Only steers and queers come from Texas, Private Cowboy, and you don’t look much like a steer to me, so that kinda narrows it down.” – Gunnery Sgt. Hartman

27. “I want that head so sanitary and squared away that the Virgin Mary herself would be proud to go in and take a dump.” – Gunnery Sgt. Hartman

28. “Sir, negative, sir! Sir, the private believes any answer he gives will be wrong and the Senior Drill Instructor will only beat him harder if he reverses himself, sir!” – Private Joker

30. “You’d better flush out your head, new guy. This isn’t about freedom; this is a slaughter. If I’m gonna get my balls blown off for a word, my word is ‘poontang.’” – Animal Mother

Did Our Collection Inspire You to Join the Military?

Full Metal Jacket is one of those films that you will never forget. It tells the story of several Marine Corps members and a Sergeant who insults, tyrannizes, and irritates them.

Some moral concerns may be raised about the film, particularly how soldiers are trained and how another individual can decide whether an individual lives or dies. But, these brutal scenes are some of the realities of war that we need to open our eyes to.

This film reminds us that victory is not guaranteed no matter how hard you train and prepare. But, if you are determined, you have a better fighting chance to overcome any battle and obstacle. Moreover, it teaches us that as a soldier of life, you’re going to have to make do with what you got; you cannot choose what you’ll face next.

Hopefully, we were able to motivate you to fight through your life’s battles with a brave heart. We believe in you, soldier!

Which quotes are your favorites? Let us know by commenting below!