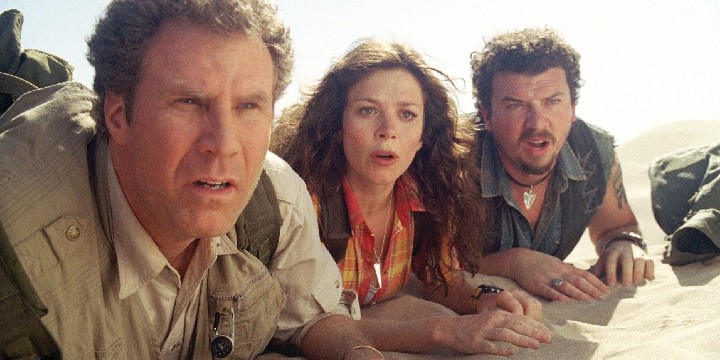 If you’re a fan of adventure and comedy movies, this collection of Land of the Lost quotes is something you’ll enjoy!

This 2009 movie is about the thrilling journey of a scientist named Rick Marshall. Together with his assistant and a survivalist, they go on a different kind of adventure in a whole new world!

After activating a tachyon amplifier, a time warp opens and brings them into an inter-dimensional desert filled with dinosaurs and all sorts of danger. To survive, they befriend a primate named Cha-Ka and rely on him while finding a way back home.

Without a doubt, Land of the Lost is filled with thrilling and hilarious scenes. So, we’ve created this collection to share their experiences with you!

And make sure to read these Moonstruck quotes and Step Brothers quotes.

Best Land of the Lost Quotes

1. Will Stanton: “You ever get tired of being wrong?”

4. Dr. Rick Marshall: “This is for you. I signed it. You’re supposed to say the title and the publisher.”

Dr. Rick Marshall: “I was so surprised that your attorney signed off on that. I was like, ‘Are you sure? Is this gonna be okay?’ He said, ‘Yeah, go for it.’”

5. Dr. Rick Marshall: “It boils down to two simple words.”

Enik: “Of course. Even in the farthest reaches of the universe, we have seen your Matt Lauer video.”

9. “This is a little travel mug I like to call the perfect woman. Big ole set of boobies—no head. And a handle.” – Will Stanton

Dr. Rick Marshall: “It’s a donut stuffed with M&Ms. That way, when you’ve finished the donut, you don’t have to eat any M&Ms.”

12. “Thank God for that. That one was peering into my soul.” – Dr. Rick Marshall

Matt Lauer: “His new book arrives tomorrow. You might want to look for it in the ‘I’m out of my freaking mind’ department.”

Land of the Lost Quotes to Highlight Dr. Rick Marshall’s Sense of Humor

Dr. Rick Marshall: “He went to a better place.”

Ernie: “You killed him?”

Will Stanton: “And now you guys are friends?”

Dr. Rick Marshall: “While I was snaking my way through his bowels, I don’t know, I—I must have dislodged some sort of intestinal blockage. And, yes, he’s in a much better mood now. So can we move on? I would really like to go home.”

Will Stanton: “You were deuced out by a dinosaur. That is incredibly cool.”

More Land of the Lost Quotes for the Adrenaline Junkie

18. “Well what do you know? This is one of those days when pouring piss on your head is a bad idea!” – Will Stanton

20. “Field rations are running dangerously low. Thus, I’ve made the determination that, if need be, if faced with starvation, we will cook and eat Cha-Ka. I’ve been thinking about this a lot, actually. If Cha-Ka meat were the secret ingredient on Iron Chef, I’m sure Bobby Flay would probably serve it with roasted red peppers and a dash of cumin’ and a braised polenta. It wouldn’t be an easy thing to do, but if you slow-roast the little guy, I’m sure that Cha-Ka meat would just fall right off the bone.” – Dr. Rick Marshall

When Was The Last Time You Experienced a Rush of Adrenaline?

In the movie, Dr. Rick Marshall’s career has been going downhill. Many criticized and discouraged him, but with the help of Holly Cantrell, he pushed for what he wanted to prove. Because of this, Dr. Marshall and his companions could time travel and show people who didn’t believe in his theories a whole new world.

What happened with Dr. Rick Marshall is a perfect example of the saying, “People hate what they don’t understand and try to destroy it.” So, remember that you must stand for what you believe in. It does not only build your self-respect, but it also gains respect from others.

Land of the Lost is indeed a great movie that is suitable for both kids and adults. It reminds us to stand our ground and inspire others to do the same. More than that, it’s also filled with hilarious scenes and lines that you’ll never get tired of reading!

Whenever you’re feeling disheartened because no one believes in you, you can always read this collection once more. Remember that sticking to your values and beliefs is the best way to live happily. Who knows, this might lead to the most incredible adventure of your life!