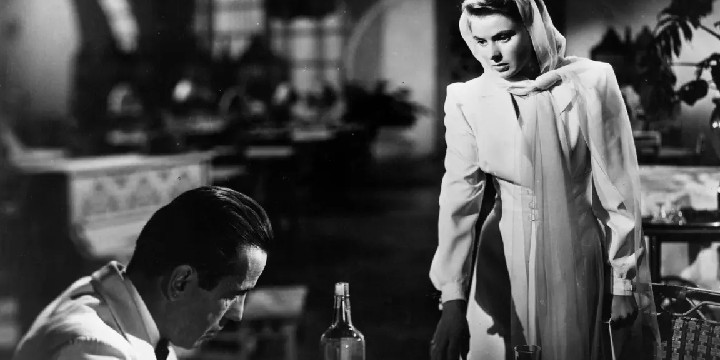 If you like classic movies with great life lessons, then these Casablanca quotes should be in your collection!

Casablanca is a 1942 classic American movie set in Morocco during World War II. It tells the story of Rick Blaine, a cynical American nightclub owner who had a love affair with Ilsa, a Czech Resistance fighter.

Ilsa and Rick were lovers in Paris before splitting up due to different circumstances. They cross paths again in Casablanca, where the Nazis pursue Ilsa and Victor, her husband.

This turn of events rekindled their love, leaving Rick torn between staying with Ilsa or letting her flee to safety in the United States with Victor. With the dilemma of doing the right thing versus what he wants, we see Rick struggling to decide.

Making decisions in life can be difficult, but if you are forced to make one, always choose to do the right thing. Dive deep into this collection that’ll paint a picture of how things went in the movie. We’re sure these Casablanca quotes will take you back to some of Rick and Ilsa’s most intense moments.

And don’t forget to check out these Pretty Woman quotes and Jerry Maguire quotes.

1. “Each of us has a destiny—for good or for evil.” – Victor Laszlo

2. “If we stop breathing, we’ll die. If we stop fighting our enemies, the world will die.” – Victor Laszlo

6. “Well everybody in Casablanca has problems. Yours may work out.” – Rick Blaine

7. “Don’t you sometimes wonder if it’s worth all this? I mean what you’re fighting for.” – Rick Blaine

8. “I have many a friend in Casablanca, but somehow, just because you despise me, you are the only one I trust.” – Guillermo Ugarte

9. “Round up the usual suspects.” – Capt. Louis Renault

12. “The winning side would have paid you much better.” – Capt. Louis Renault

14. “Why did you have to come to Casablanca? There are other places.” – Rick Blaine

15. “We mustn’t underestimate American blundering. I was with them when they blundered into Berlin in 1918.” – Capt. Louis Renault

16. “I’m going to miss you. Apparently, you’re the only one in Casablanca with less scruples than I.” – Capt. Louis Renault

17. “As the leader of all illegal activities in Casablanca, I am an influential and respected man.” – Signor Ferrari

19. “Might as well be frank, monsieur. It would take a miracle to get you out of Casablanca, and the Germans have outlawed miracles.” – Signor Ferrari

20. Guillermo Ugarte: “Heh, you know, watching you just now with the Deutsche Bank, one would think you’ve been doing this all your life.”

Rick Blaine: “Oh, what makes you think I haven’t?”

21. Rick Blaine: “And remember, this gun is pointed right at your heart.”

Capt. Louis Renault: “That is my ‘least’ vulnerable spot.”

24. “Henri wants us to finish this bottle, then three more. He says he’ll water his garden with champagne before he lets the Germans drink any of it.” – Rick Blaine

25. “Of all the gin joints in all the towns in all the world, she walks into mine.” – Rick Blaine

26. “Louis, I think this is the beginning of a beautiful friendship.” – Rick Blaine

27. “Well, there are certain sections of New York, Major, that I wouldn’t advise you to invade.” – Rick Blaine

28. “Who are you really, and what were you before? What did you do and what did you think, huh?” – Rick Blaine

29. “Now, you’ve got to listen to me! You have any idea what you’d have to look forward to if you stayed here? Nine chances out of ten, we’d both wind up in a concentration camp. Isn’t that true, Louie?” – Rick Blaine

30. “Last night we said a great many things. You said I was to do the thinking for both of us. Well, I’ve done a lot of it since then, and it all adds up to one thing: you’re getting on that plane with Victor where you belong.” – Rick Blaine

31. “I heard a story once—as a matter of fact, I’ve heard a lot of stories in my time. They began with the sound of a tinny piano playing in a parlor downstairs.” – Rick Blaine

32. “It’s funny about your voice, how it hasn’t changed. I can still hear it. ‘Richard, dear, I’ll go with you anyplace. We’ll get on a train together and never stop.’” – Rick Blaine

35. “You want to feel sorry for yourself, don’t you? With so much at stake, all you can think of is your own feelings. One woman has hurt you, and you take your revenge on the rest of the world. You’re a coward and a weakling.” – Ilsa Lund

36. “Welcome back to the fight. This time I know our side will win.” – Victor Laszlo

37. “You know how you sound? Like a man who’s trying to convince himself of something he doesn’t believe in his heart.” – Victor Laszlo

38. “What if you killed all of us? From every corner of Europe, hundreds, thousands would rise up to take our places. Even Nazis can’t kill that fast.” – Victor Laszlo

39. “I ask only one thing. You won’t give me the letters of transit: all right, but I want my wife to be safe. I ask you as a favor, to use the letters to take her away from Casablanca.” – Victor Laszlo

Casablanca Quotes for Those Who Want to Fall in Love

43. “With the whole world crumbling, we pick this time to fall in love.” – Ilsa Lund

44. “Richard, we loved each other once. If those days meant anything at all to you.” – Ilsa Lund

45. “If someone loved you very much, so that your happiness was the only thing that she wanted in the world, but she did a bad thing to make certain of it, could you forgive her?” – Annina Brandel

Touching Casablanca Quotes That Will Move You to Tears

Victor Laszlo: “Apparently you think of me only as the leader of a cause. Well, I’m also a human being. Yes, I love her that much.”

Rick Blaine: “I never make plans that far ahead.”

Rick Blaine: “We’ll always have Paris. We didn’t have, we, we lost it until you came to Casablanca. We got it back last night.”

Rick Blaine: “And you never will. But, I’ve got a job to do, too. Where I’m going, you can’t follow. What I’ve got to do, you can’t be any part of, Ilsa. I’m no good at being noble, but it doesn’t take much to see that the problems of three little people don’t amount to a hill of beans in this crazy world. Someday you’ll understand that.”

Rick Blaine: “I remember every detail. The Germans wore gray, you wore blue.”

Rick Blaine: “I’m saying it because it’s true. Inside of us, we both know you belong with Victor. You’re part of his work, the thing that keeps him going. If that plane leaves the ground and you’re not with him, you’ll regret it. Maybe not today. Maybe not tomorrow, but soon and for the rest of your life.”

53. “Rick is the kind of man that—if I were a woman, and I were not around, I should be in love with Rick. But what a fool I am talking to a beautiful woman about another man.” – Capt. Louis Renault

Rick Blaine: “That’s so long ago, I don’t remember.”

Rick Blaine: “Well if I gave you any thought I probably would.”

56. German Banker: “Perhaps if you tell him I run the second largest banking house in Amsterdam?”

Carl Headwaiter: “Second largest? It wouldn’t impress Rick. The leading banker in Amsterdam is the pastry chef in our kitchen.”

57. Capt. Louis Renault: “What in heaven’s name brought you to Casablanca?”

Rick Blaine: “My health. I came to Casablanca for the waters.”

Capt. Louis Renault: “The waters? What waters? We’re in the desert!”

Rick Blaine: “I was misinformed.”

58. Capt. Louis Renault: “Rick, there are many exit visas sold in this café, but we know that you’ve never sold one. That is the reason we permit you to remain open.”

Rick Blaine: “Oh? I thought it was because I let you win at roulette.”

Capt. Louis Renault: “That is another reason.”

59. Capt. Louis Renault: “I’m shocked, shocked to find that gambling is going on in here!”

60. Maj. Heinrich Strasser: “What is your nationality?”

Capt. Louis Renault: “That makes Rick a citizen of the world.”

Were You Able to Get a Glimpse of the Characters’ Lives Through These Quotes?

Casablanca is a household classic and is regarded as one of the best movies ever made. As proof, it was ranked second on the American Film Institute’s list of the Best American Movies of All Time in 1998 and third on the revised list in 2007.

The movie is an excellent depiction of people’s lives and struggles to survive during WWII. It proves that no one ever wins in war and only causes people to suffer. After all, war is an event where everyone’s hearts, minds, and bodies agonize deeply.

Love is also one of the main themes of the movie. Though being in love is like being on Cloud Nine, it also has some problematic aspects which will cause you to be in pain physically and emotionally.

When you’re hurt by the person you love, it leaves a deep wound inside you that is difficult to heal. Unlike flesh wounds that can be remedied through medication, it takes time and conscious effort to move on and feel whole once again when we’re hurt by love. What’s so complicated about this is the fact that, sometimes, we aren’t even aware that we’re already inflicting pain on the person we love.

So, we hope you were able to get a clearer picture of what your actions entail through these quotes. Never, under any circumstance, be afraid and hesitate to do the right thing. Feel free to review this collection whenever you need a reminder or just want to revisit the movie’s most touching scenes!

What did you learn from the characters’ lives and their love story? How would you react if you were placed in a similar situation? Share your thoughts below.