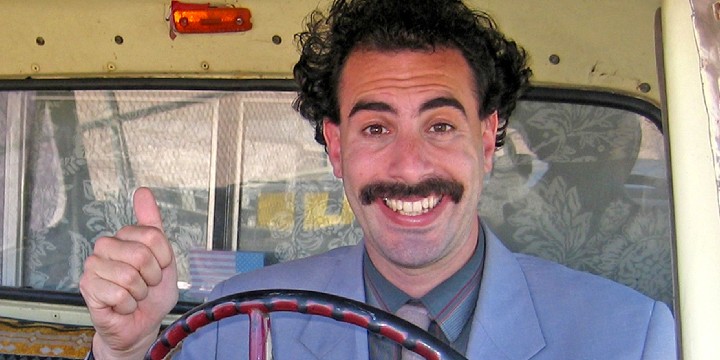 Read these Borat quotes for outrageously hilarious lines you won’t ever get enough of.

Some of the best comedy pieces out there will not only have you laughing for days to come, but they will also make you think and reflect on life and society. Lucky for us, this is precisely what Borat makes us do.

If you’re curious about the movies’ topics, read on. You’ll for sure get a better understanding of this offensively hilarious franchise!

And make sure to read these Nacho Libre quotes and Tropic Thunder quotes.

2. “Democracy is different in America. For example, women can vote, but horse can not!” – Borat Sagdiyev

3. “What is more dangerous: this virus or the Democrats?” – Borat Sagdiyev

4. “My name i’ Borat. I come a—from Kazakhstan. Can I say a—first, we support your War of Terror.” – Borat Sagdiyev

5. “I found a new book which only tells the truth. It’s called Facebook. I learn so many facts there.” – Sandra Jessica Parker Sagdiyev

6. “Fourteen years ago, I released a movie film which was great success in US & A, but 7. Kazakhstan become a laughing stock around the world.” – Borat Sagdiyev

8. “You let women in cinemas here? In my country, we have a pen outside for the animals and womens.” – Borat Sagdiyev

9. “This is Natalya. She is my sister. She is number-four prostitute in whole of Kazakhstan.” – Borat Sagdiyev

10. Sandra Jessica Parker Sagdiyev: “Daddy, a woman can own a business?”

Borat Sagdiyev: “No. When a woman owns a business, her brain breaks, and her head falls off.”

11. “I can do anything a man can do!” – Sandra Jessica Parker Sagdiyev

12. “My country send me to United States to make movie film. Please, come and see my film. If it not success, I will be execute.” – Borat Sagdiyev

13. “These gypsy tears will keep you safe.” – Borat Sagdiyev

15. “I arrived in America’s airport with clothings, US dollars, and a jar of gypsy tears to protect me from AIDS.” – Borat Sagdiyev

Borat Quotes That Will Elevate Your Mind

16. “May George Bush drink the blood of every man, woman, and child in Iraq!” – Borat Sagdiyev

17. “You telling me the man who try to put a rubber fist in my anus was a homosexual?” – Borat Sagdiyev

18. “A magnificent new premier named McDonald Trump rose to power and made America great again! He also became buddies with tough-guy leaders from around the world.” – Borat Sagdiyev

19. “Trump would be disappointed! You are leaving hotel without golden shower.” – Borat Sagdiyev

20. “Because of Trump, 350 million Americans still alive. Trump never had stroke. Vote for premier Trump, or you will be crushed.” – Borat Sagdiyev

Other Borat Quotes That Are Worth Your Attention

21. “Lucky for me, I was taken in by two of America’s greatest scientists.” – Borat Sagdiyev

22. “In my country, we say to let a woman drive a car is like to let a monkey fly a plane, very dangerous, yes.” – Borat Sagdiyev

23. “Donald Trump: strongest premier in history. He not racist. Black guys love him so much, they kneel before him.” – Borat Sagdiyev

24. “Kazakhstan is more civilized now. Women can now travel on inside of bus, and homosexuals no longer have to wear blue hats.” – Borat Sagdiyev

25. “This C.J. was like no Kazakh woman I have ever seen. She had golden hairs, teeth as white as pearls, and the asshole of a seven-year-old. For the first time in my lifes, I was in love.” – Borat Sagdiyev

Did These Borat Quotes Offer You a Better Understanding of Others’ Points of View?

Society, culture, and the nature of politics are all difficult things to change. It would be great if these aspects of life would require no change, but as in everything in life, there would always be room for improvement.

All these bring about sensitive topics that some people would rather not face. Yet, because Borat approaches it in a humorous light, the audience takes it in more easily.

This mockumentary franchise seamlessly integrates its perceived flaws of American culture and what actions we should take to improve them. We all encounter sexism, inequality, and discrimination every day in our lives, but most of the time, we just ignore them. But, through Borat, we understand that each of us must act toward a better world.

No matter how small we think the effects of our actions or words are, remember, if we’re collectively aiming for the same thing, then the impact of our efforts will double a thousandfold. Borat is indeed an offensive piece, but because of its approach, we open our minds to new perspectives and points of view.

Let these Borat quotes inspire you to build a better world. No matter how ugly our society is right now, we have the power to change it. So, go forward knowing that good change starts with you!