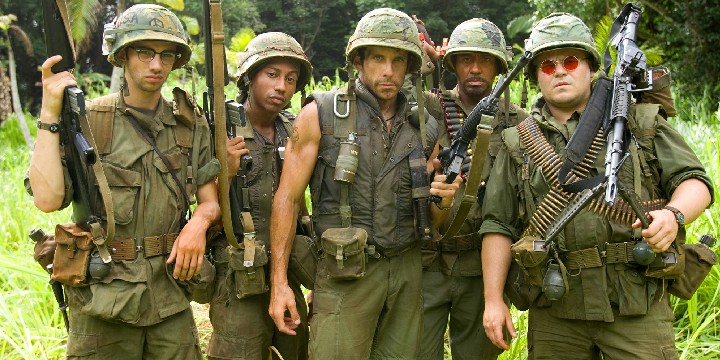 If you’re looking for some funny lines that will get you through a dull and tiresome day, these Tropic Thunder quotes are for you!

Tropic Thunder is a 2008 satirical action-comedy movie directed and co-written by Ben Stiller.

Its plot revolves around a group of actors who were forced to rely on their acting skills to survive in the middle of the jungle.

They weren’t aware of it, but the location where they were dropped off is the hideout of the powerful gang of drug dealers.

They paid no mind to the struggles they had to go through, thinking it was all part of the script.

Only when they were shot at and kidnapped by the gang members did they realize that they were far from shooting a movie.

Just by that, we can already imagine how hilarious the scenes from the movie are!

So, to give you a more concrete glimpse of what went on, here’s a list of the best Tropic Thunder quotes.

We’re sure you’ll end up clutching your stomachs because of all the laughter it’ll bring you!

And don’t forget to check out these Pootie Tang quotes and Nacho Libre quotes.

1. “I know who I am! I’m a dude playing a dude disguised as another dude!” – Kirk Lazarus

2. “Man, I didn’t drop the character ’till I did the DVD commentary.” – Kirk Lazarus

4. “The universe―is talking to us right now. You just gotta listen.” – Les Grossman

8. “Yeah. But seriously, a nutless monkey could do your job.” – Les Grossman

10. “I’m like a child who plays with himself whenever he’s scared.” – Kirk Lazarus

14. “What do you mean? Writers don’t always tell the truth.” – Four Leaf Tayback

15. “This walkie-talkie goes to the helicopter, and the helicopter is God. And I am Jesus Christ. And you are my chosen disciples.” – Damien Cockburn

16. “Man, that’s beauty. Nights like tonight make a man wonder what it’s all about.” – Kirk Lazarus

17. “I don’t know what kind of gun this is. I only know the sound it makes when it kills a man.” – Four Leaf Tayback

18. “Any movie the director backs is usually a big hit, but every PlayStation has a blue-ray DVD player in it.” – Kevin Sandusky

Tropic Thunder Quotes That Zoom in on Movies and Acting

19. “That’s what that playing’ God stuff was about, tryin’ to get us to act good to save the movie.” – Tugg Speedman

20. “I’ll see you again tonight when I go to bed in my head movies. But this head movie makes my eyes rain!” – Tugg Speedman

21. “As for why I’m in this movie, maybe I just knew I had to represent. ‘Cause they had one good part in this movie for a Black man and they gave it to Crocodile Dundee.” – Alpa Chino

22. “Being an actor’s no different than being a rugby player or construction worker, save for the fact that my tools are the mechanisms which trigger human emotion.” – Kirk Lazarus

23. “I’ve done a lot more effect-driven films than you have and I think I can spot―a prop head when I see one! It’s corn syrup, guys! Corn syrup and latex. Warm blood-flavored corn syrup.” – Tugg Speedman

24. Tugg Speedman: “This is insane. Are you really going to abandon this movie? We’re supposed to be a unit!”

25. Tugg Speedman: “Are you trying to mess up these takes?”

Tropic Thunder Quotes That Are Filled With Emotion

26. “I can see why you’re upset, but I have to deal with a bunch of divas. Tugg can’t be emotional. He’s not able to cry.” – Damien Cockburn

27. “An actor’s job is no different from anybody else’s job. I just have what it takes to show emotion.” – Kirk Lazarus

28. “You know what the problem is, Damien. Not to get into his business, but if I’m feeling emotional, does Osiris have to be emotional too?” – Tugg Speedman

29. “It went badly. Lazarus got emotional. When he was crying, he started spitting, which wasn’t needed because the script didn’t call for it.” – Tugg Speedman

Kirk Lazarus: “Thanks for the permission.”

31. Kirk Lazarus: “Are we finishing this scene or does everyone have to be emotional?”

Damien Cockburn: “We’re not cutting the scene. We all have to be emotional.”

32. “You need to man up. It doesn’t matter if Lazarus is more talented than you. If he’s being emotional, you be even more emotional. Didn’t you have a sick dog when you were younger? You should think of that while you’re acting.” – Rick Peck

Tropic Thunder Quotes for All the Fans of the Movie

34. “See, this is the good part. This is when the job gets fun! Ask―and you shall receive!” – Les Grossman

35. “What about you, Master Blaster? You got a certain someone you trying to get back with in the States?” – Kirk Lazarus

36. “There ya go, get him chugging on some of Alpa’s ‘Ass-Water’ that will bring him around, it’s a cure-all.” – Kirk Lazarus

37. “Hey, you wanna get on the train here or you wanna ruin another take, huh?” – Tugg Speedman

39. Kevin Sandusky: “I was talking to whoever was listening.”

Alpa Chino: “Yeah. But those dudes were trained soldiers.”

Kirk Lazarus: “Yeah! And we trained actors, mothaf*cka! Time to man up. And I ain’t gonna sugarcoat. Some of us might not even make it back.”

40. Kirk Lazarus: “Took a whole lotta tryin’ just to get up that hill. Now we’re up in the big leagues, gettin’ our turn at bat. As long as we live, it’s you and me, baby.”

Cody: “Yeah, you’re the Milli Vanilli of patriots, okay? You lied about fighting in the Vietnam War. It’s like―it’s like punching the American Flag in the face goddammit! God, to think I believed you!”

Alpa Chino: “In being’ a dumbass?”

Kirk Lazarus: “I guess so.”

43. Tugg Speedman: “I have been worthless all my life, but you need to know something.”

Kirk Lazarus: “What do I need to know?”

Tugg Speedman: “I think of you as my brother.”

Tropic Thunder Quotes for Those Curious About Dating and Relationships

Kirk Lazarus: “No, you missing’ me, man. I’m talking about something special. Big difference. How about it?”

46. Alpa Chino: “No. I mean―I always wanted to, but, I guess I just never had the courage to ask. It’s―it’s complicated.”

Kirk Lazarus: “No! It’s simple as pie, man. You plant your feet on the ground, you look her square in the eyes, you say, ‘Hey. Baby, you and I are going on a date. That’s the end of the story.’ What’s her name?”

Kirk Lazarus: “You say ‘Listen here, Lance’ Lance? What the f*ck did I just hear? Lance?”

Rick Peck: “A hooker. Oh, Jesus, you killed a hooker!”

How Do You Think the Characters Should Have Acted in the Face of Danger?

Tropic Thunder begins with prima donna actors getting ready to star in a Vietnam War movie. But, their attitude didn’t sit well with the director and the rest of the crew.

Because of that, they decided to abandon them in the jungle, telling them they would be filming with hidden cameras and explosives. This is where all the fun and action start.

It’s pretty funny watching the protagonists go about their lives in the jungle as if they were filming a movie. They were carefree and just went with the flow until everything took a turn for the worst. With this, we see just how much our attitude and actions can affect our lives.

The actors would have been well on their way to shooting a real movie if only they were humble, kind, and considerate of others’ feelings. No doubt, Tropic Thunder is proof that there are lessons to be learned in any experience, even with the funniest movie ever!

Have you watched Tropic Thunder before? Did you learn anything from this collection? Please, let us know in the comments.