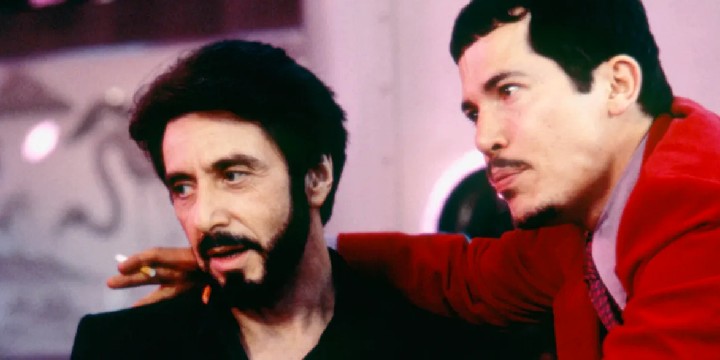 These Carlito’s Way quotes will surely shake you up with all the action and heartbreaking scenes that the movie offers!

It revolves around Carlito, a criminal imprisoned for 30 years. After getting out, he wanted to live a whole new life, free from his past mistakes.

He was hopeful, optimistic, and willing to change for the better.

Despite this, people from his past life constantly tried to drag him down.

As we learn more about the movie, we notice how these scenes send a clear message.

It shows the audience the feeling of running toward a dream while a bullet is chasing you.

Indeed, watching it will definitely choke you up with tears and leave you in awe of the beauty of its storytelling.

So, make sure you don’t miss out on our collection by reading through all the quotes we’ve compiled for you.

Continue below to learn more about Carlito’s Way.

And make sure to read these Blood In Blood Out quotes and Paid in Full quotes.

1. “The dream don’t come no closer by itself. We got to run after it now.” – Carlito Brigante

2. “No room in this city for big hearts like hers.” – Carlito Brigante

3. “Never give up your friends, Dave, no matter what.” – Carlito Brigante

4. “Sorry, boys, all the stitches in the world can’t sew me together again.” – Carlito Brigante

5. “No favor. I owe you. Favor gonna kill you faster than a bullet.” – Carlito Brigante

9. “Everything you learned in the neighborhood, every instinct you’ve got won’t do anything but get you killed!” – Gail

Profound Carlito’s Way Quotes That Will Make You Think

10. “Times have changed. What happened to the miniskirts? Where’s all that m*r*j**n*? Now, everything is platforms, cocaine, and dances I don’t dance. What a man got to come to when he loses five years.” – Carlito Brigante

12. “I don’t invite this sh*t. It just comes to me. I run. It runs after me. Gotta be somewhere to hide.” – Carlito Brigante

13. “You ain’t a lawyer no more, Dave. You’re a gangster now. You’re on the other side. Whole new ball game. You can’t learn about it at school, and you can’t have a late start.” – Carlito Brigante

14. “Most of my crew got washed a long time ago. Don’t worry. My heart, it don’t ever quit. I ain’t ready to check out. Seems like I just got out of the joint, stood up in front of that judge, and told him what was who.” – Carlito Brigante

15. “There is a line you cross you don’t never come back from, point of no return. Dave crossed it. I’m here with him. That means I am going along for the ride. The whole ride. All the way to the end of the line, wherever that is.” – Carlito Brigante

18. “What has happened to you? What are you acting like this for? It doesn’t make sense that you should hate this guy. Because this guy is you 20 years ago.” – Reinaldo Saso

20. “This guy, this counselor in Lewisburg, Mr. Seawald, once said to me, ‘Charlie, you run out of steam, you can’t sprint all the way. You got to stop sometime. You can’t buck it forever. It catches up to you. It gets you. You don’t get reformed. You just run out of wind.'” – Carlito Brigante

21. “There I am, sitting in jail, wondering where you are, what you’re doing, who you’re with.” – Carlito Brigante

22. “So look at you. You really made something of your life.” – Carlito Brigante

23. “Here’s me back on the street, third Sunday in August, Old-Timer’s Day in the barrio. Nothin’ left like them old cowboy movies, only, instead of tumbleweed and cow dung, we got stripped car wrecks and dog sh*t.” – Carlito Brigante

24. “Maybe I don’t give a sh*t. Maybe I don’t remember the last time I blew my nose either. Who the f*ck are you that I should remember you, huh? What, you think you’re like me? You ain’t like me, motherf*cker. You’re a punk. I’ve been with made people, connected people. Who you been with? Chain-snatchin’, jive-ass, maricon motherf*ckers. Why don’t you get lost? Go ahead, snatch a purse. Take a f*ckin’ walk.” – Carlito Brigante

25. “But my time in the Sterling Correctional facilities of Greenhaven and Sing Sing has not been in vain. I’ve been cured, born again, like the Watergaters. I know you’ve heard this rap before, Your Honor, I’ve changed. I’ve changed, and it didn’t take no 30 years like Your Honor thought, but only five.” – Carlito Brigante

26. “Loyalty to your friends is going to get you killed one day.” – David Kleinfeld

27. “Oh, Jesus. Jesus Christ, look at you. You said they were friends, Guajiro. But there ain’t no friends in this sh*t business.” – Carlito Brigante

28. Carlito Brigante: “Let me deal with Pachanga. He’s my brother.”

Reinaldo Saso: “He’s your brother? That son of a b*tch would kill his mother for money.”

Carlito Brigante: “Most people will.”

Carlito’s Way Quotes That Reveal Issues About Racism and Violence

29. “F*ck you and your self-righteous code of the g*dd*mn*d street. Did it pull you out of a 30-year stint in 5 years? Did it? No, I did. Did it get you acquitted four f*cking times? No, it didn’t. I did. So f*ck you, f*ck the streets, your whole g*dd*mn world is this big, and there’s only one rule—you save your own ass.” – David Kleinfeld

30. “Somebody’s pullin’ me close to the ground. I can sense, but I can’t see. I ain’t panicked. I been here before.” – Carlito Brigante

31. “Carlito, man, Death Valley out here, man. You know me, I take to the street with any of these motherf*ckers, man. But these new kids nowadays, man, they got no respect for human life. They shotgun you just to see you fly up in the air. You’re better off in jail.” – Pachanga

Carlito’s Way Quotes That Are Packed With Action

34. “I’m reloaded! Come on in here, motherf*ckers! Come on. I’m waitin’ for you! You ain’t comin’ in? I’m comin’ out! You’re up against it now, motherf*ckers! I’m gonna blow your f*ckin’ brains out!” – Carlito Brigante

35. “I know how this dream ends, Charlie. It isn’t in paradise. It ends with me carrying you into Sutton Emergency Room at three o’clock in the morning, and standing there, crying like an idiot, while your shoes fill with blood and you die.” – Gail

36. “I mean, I don’t judge you. You know, Charlie. And what do you do that’s so wonderful? You ever kill anybody, Charlie?” – Gail

37. “Gimme the f*cking gun! Since when are you a tough guy?” – Carlito Brigante

39. “Let me get this straight, he’s gonna jump off a barge, swim a hundred yards, to a buoy in the east river? Impossible. It’s too rough. He is going to die.” – Carlito Brigante

40. “He’s got a good future if he can live past next week.” – Carlito Brigante

41. “And look at me. Completely rehabilitated, reinvigorated, reassimilated, and finally going to be relocated, and I want to thank a lot of people for that. I look over there and I see that man there, Mr. Norwalk. I want to thank you, sir, for making the tapes in an illegal fashion. I would like to thank the Court Of Appeals, for reversing you, Your Honor. And I want to thank Almighty God without whom no case gets tossed.” – Carlito Brigante

42. “Hey, look, relax. You’re not dealing, so he can’t have anything on you. That’s not possible. This is the way this guy is. He’s on a g*dd*mn fishing exhibition.” – David Kleinfeld

43. “Your Honor, with all due respect, past and present, and without further to-do. Let me ensure this court that I am through walkin’ on the wild side. That’s all I’ve been tryin’ to tell you. I have been sick with the social ills known in the ghetto.” – Carlito Brigante

44. “He’s also saying that you’re a piece of sh*t and that you don’t have the balls to take care of the problem, and he’s wasted a lot of time without making any money. Besides, I hear he’s spying on us for Benny Blanco.” – Reinaldo Saso

45. “Don’t take me to no hospital, please. F*ckin’ emergency rooms don’t save nobody. Son-b*tches, always pop you at midnight when all they got is a Chinese intern with a dull spoon.” – Carlito Brigante

46. “What do you mean? You didn’t hear? I took a few in the back. When the streets are mad at you, she don’t put you in a box. She puts you in one of these things.” – Lalin Miasso

47. “No. You take it easy. You got any manners? You wanna f*ck her, f*ck her like a normal human being. Take her in the bedroom.” – David Kleinfeld

48. “Should have figured I’d find you walking around up here doing a little memory lane.” – Walberto

49. “Hey, they’re just dancing. Don’t you appreciate that? The movement. The rhythm. What I don’t appreciate is he’s got his f*ckin’ hands all over her ass.” – Carlito Brigante

Which Carlito’s Way Quotes Made You Think Deeply About Dreams and Life?

In reaching our dreams in life, the most important things are love, hope, and passion. Without our love for life and people, our hope for a better future, and our passion for doing what we want, it would be harder to achieve our goals.

Like Carlito, no matter how hard and tough his past was, he still had the drive to hold on to the possibility of a peaceful tomorrow. Because of this, even if his ending was tragic, he still lived a deep and full life. He planted seeds of hope every day of his life, which made everything all the more meaningful.

Moreover, his character’s resolution to be a good person despite unfavorable circumstances is definitely an inspiration to all. Some things were out of his control, but his heart stayed pure and loving in his final moments.

Hopefully, these Carlito’s Way quotes were able to give you a more optimistic view of life. Remember to reread these quotes to understand why the movie is a cult favorite even decades after its release.

Which Carlito’s Way quote is your favorite? Are you a fan of Al Pacino? Comment below!