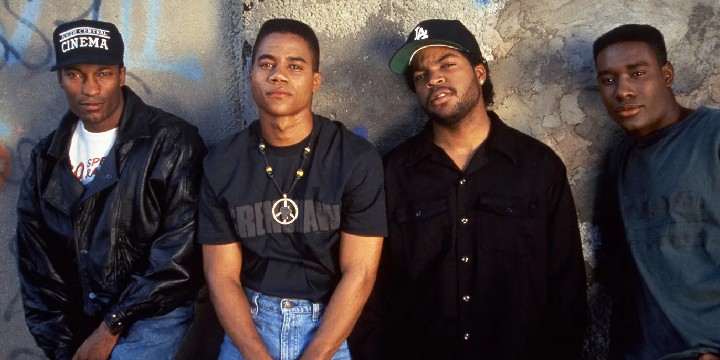 Let these Boyz n the Hood quotes take you back to the days when you were still figuring life out.

Boyz n the Hood is a coming-of-age movie about three Black boys growing up in South Los Angeles. It was released in 1991 and was written and directed by John Singleton as his directorial debut.

The plot follows the complex characters of Tre, Ricky, and Doughboy as they navigate the harrowing experience of racism and prejudice while transitioning to adulthood.

Its emotional weight and raw depiction of culture and reality perfectly deliver the message of life. That’s why it was no surprise when Boyz n the Hood received a lot of positive reviews and awards.

So, if you’re curious about what you can learn from the movie, make sure you read our collection below.

Aside from the entertaining and funny lines, these words will teach you something about life.

And don’t forget to check out these Blood In Blood Out quotes and Paid in Full quotes.

1. “Never respect anybody who doesn’t respect you back.” – Furious Styles

2. “Any fool with a dick can make a baby, but only a real man can raise his children.” – Furious Styles

3. “What you did is no different than what mothers have been doing from the beginning of time.” – Reva Styles

4. “Either they don’t know, don’t show, or don’t care about what’s going on in the hood.” – Doughboy

6. “I don’t even know how I feel about it neither, man. It just goes on and on, you know. Next thing you know, somebody might try and smoke me. Don’t matter, doe. We all got to go some time, huh?” – Doughboy

7. Furious Styles: “Why is it that there is a gunshop on almost every corner in this community?”

Furious Styles: “I’ll tell you why. For the same reason that there is a liquor store on almost every corner in the Black community. Why? They want us to kill ourselves.”

Furious Styles: “Something wrong? Yeah. It’s just too bad you don’t know what it is.”

11. “I ain’t got no brother, got no mother either. She loved that fool more than she loved me.” – Doughboy

Tre Styles: “You still got one brother left, man.”

15. “Tre, what are you doing? Oh, you bad now, huh? You bad. You gotta shoot somebody now, huh? Well, here I am. Come on, shoot me. You bad, right? Look, I’m sorry about your friend. My heart goes out to his family, but that’s their problem. You my son. You my problem. I want you to give me the gun.” – Furious Styles

Doughboy: “She may as well be. Y’all got a family and all.”

Boyz n the Hood Quotes on Racism and Prejudice

19. “Fool, you don’t go to college to be talking to no b*tches. Your Black *ss posed to be learning something. Can’t learn sh*t-talking to no stupid *ss b*tch.” – Doughboy

20. “Most of those tests are culturally biased. The only part that’s universal is the math.” – Furious Styles

Officer Coffey: “You think you tough? Scared now, ain’t you? I like that. That’s why I took this job. I hate little motherf*ckers like you. Little n*ggers, you ain’t sh*t! I could blow your head off with this Smith & Wesson, and you couldn’t do sh*t. Think you tough? What set you from? Look like one of them Crenshaw mafia motherf*ckers.”

23. “Somebody must have been praying for that fool ’cause I swear, I aimed right for his head.” – Furious Styles

25. “Hey, hey! Why don’t you all act like gentlemen and let these ladies eat first.” – Tre Styles

26. “Who this? What kind of way is that to answer the phone? Have you given any more thought to what we talked about?” – Reva Styles

28. “How many times do I have told you, if a girl says she’s on the pill, you use something anyway. Pill ain’t going to keep your dick from falling off. I don’t know why you insist on learning things the hard way, but you going to learn. Oh yeah, you going to learn. Pick up that hair.” – Furious Styles

29. “Aw, sh*t! N*gga, please! Ain’t nobody going to church to catch no b*tches. I should roll your *ss up off this porch with that stupid sh*t!” – Doughboy

32. The Old Man: “Ain’t nobody from outside bringing down the property value. It’s these folk, shootin’ each other and sellin’ that crack rock and sh*t.”

Furious Styles: “Well, how you think the crack rock gets into the country? We don’t own any planes. We don’t own no ships. We are not the people who are flying and floating that sh*t in here.”

34. “Just keep the baby off the streets! And change her diapers! They almost smell as bad as you.” – Tre Styles

35. “She may be your wife, but I stick my ding-a-ling in her every night, so that makes her mine.” – Doughboy

Ric Rock: “Yeah, motherf*cker, we know that sh*t. He ain’t bothering you, so don’t f*ck with him.”

37. “You’re slamming my door like some kind of gorilla on a football field!” – Tre Styles

38. “Can we have one night where there ain’t no fighting, nobody gets shot?” – Female Club Member

40. Tre Styles: “That’s what we’re here to celebrate, right? Damn, brother, how did you get so big?”

Doughboy: “Pumping iron and eating. Ain’t nothing else to do in the motherf*cking pen. Three hots and a cot, know what I’m saying? I was also reading and writing my girl.”

Monster: “Stupid motherf*cker, don’t you know you can catch that sh*t from letting them suck on your dick?”

43. “Yeah, I heard you been gettin’ that dope-head p*ussy. See, me, I probably get more p*ssy than you get air with your wannabe macdaddy *ss.” – Doughboy

44. Little Chris: “N*gga, what you mean you ain’t skinny. Motherf*cker so skinny, he can hula hoop through a Cheerio. And you ain’t got to be skinny or sick. You can die five years from now from that sh*t.”

Dooky: “Y’all just trying to scare me for real. Can you really die from letting them suck on your dick?”

45. “Would you two knuckleheads come on. I want you all to take a look at that sign-up there. See what it says: cash for your home. Do you know what that is?” – Furious Styles

46. “I heard you like Mr. GQ Smooth now. You working over at the Fox Hills Mall?” – Doughboy

49. “I know you been raised better than that! Now, put your father on the phone.” – Reva Styles

Did These Boyz n the Hood Quotes Make You Reflect About Your Youth?

Many of us can remember the days of our youth as a period full of sweet memories and tough lessons. But, transitioning from our world full of innocence and naivety to knowing what the world is actually like can be challenging and mentally and emotionally taxing.

In the Boyz n the Hood, we witness the stories of Tre, Ricky, and Doughboy growing up in Los Angeles as Black men. This holds weight and reveals the importance of telling the stories of different people living in society.

By watching them grow up, we see parts of ourselves in the feelings they experience. But, more than that, we also get to know what it feels like to live with prejudice and violence. It is nice to let these movies take us back to those days in the past, but it is also a call to be better and kinder people as we move forward.

Hopefully, these Boyz n the Hood quotes were able to teach you about compassion and staying strong. Make sure to remember the characters’ lines and use them as a source of support in your life.

Which Boyz n the Hood quote is your favorite? Have you watched the movie? Comment below!